What have you been playing recently? Come chit-chat with us

It's been quite a while since we had a community chat post for Linux gaming, so let's get it going again: what have you been gaming on Linux lately?

There's so many games releasing all the time, along with cloud gaming very much being a thing that you can game across all sorts of Linux devices now. New isn't always better though of course and I often go back to the comfort of a few "safety" games that I know I will enjoy. Lately, that's been a likely unhealthy amount of Counter-Strike: Global Offensive.

With the latest Operation named Broken Fang, it pulled in the a Retakes game mode and I have to say, I have been enjoying that massively. It's much quicker to get through, with the T side planting the bomb as soon as a round starts. Smaller levels along with picking your loadout from cards, it really has mixed up how to play CS:GO for the better. The Wingman mode is also a huge amount of fun with quick 2v2 rounds. Well worth looking into if you've not played either modes.

Apart from that, I can't get away without mentioning Valheim, the singleplayer and co-op Viking survival game. It's simply brilliant. I've been happily playing it alone, as I'm just constantly discovering new things and it's a real joy while now and then hopping into the community-run GamingOnLinux servers (info in our Discord) to see what amazing creations people have done with the building tools.

Over to you in the comments: what's been pulling you in lately and are you enjoying it? Give over your latest recommendation to fellow readers.

I am the owner of GamingOnLinux. After discovering Linux back in the days of Mandrake in 2003, I constantly came back to check on the progress of Linux until Ubuntu appeared on the scene and it helped me to really love it. You can reach me easily by emailing GamingOnLinux directly.
See more from me
Some you may have missed, popular articles from the last month:
70 comments
Page: «2/7»

View PC info
I try to learn more on Stationeers...
I own this game for a long time now, but I didn't really try to play before...

Big learning curve on the game, but the last updates are really interesting.
0 Likes

After Mad Max i went back to Torchlight 2.

First thing in the morning:
- Coffee and snack ready
- Game sound off
- Podcast on
1 Likes, Who?
benke 14 Feb

Just bought Baltic and Black Sea DLCs so I am back to ETS2 :-) Also played excelent free game B.i.t.Lock and game called Inside which is actualy Windows game (by same authors of great Limbo) but it works well under Wine.
0 Likes

View PC info
Personally, a small group of friends and I had, up to recently, mostly been playing Empyrion: Galactic Survival, which, while not a native Linux game, runs basically flawlessly via Proton, with the usual anti-cheat issues (I host my own server for it, begrudgingly, on a Windows Server VM that I keep around for such situations). Unfortunately, their latest update started causing some very strange issues with blocks being replaced when you weren't looking with ones that shouldn't even fit (e.g. the cockpit of a Small Vessel turning into a Capital Vessel double-door... but at teeny tiny scale), I think related to spawning in blueprints.

Since we didn't want to risk screwing things up any further, we've shelved that one for now to give them time to hopefully identify & hotfix.

Instead, we've gone back to 7 Days to Die, which does have native Linux builds of not just the dedicated server (again, running my own), but the client as well (interestingly, I believe both Empryion and 7D2D are Unity games, but only the latter has native builds). Interestingly, it looks like as of the combo of 'my weird bleeding edge Gentoo setup', 'actually working AMDGPU drivers now that I've switched away from nVidia', and the current game build of A19.3, the 'not fully implemented yet' Vulkan renderer (via the 'Show game launcher' option when starting) seems to be working like a champ for me, and gives me way better/more stable frame rates over OpenGL.

One note, if you have multiple GPUs like, say, an onboard Intel iGPU as well, you may need to edit the Command Line Options in Steam for 7D2D and include something like:

I used NitroGen to create a custom map per my friend's request: 'a lot of big cities'... 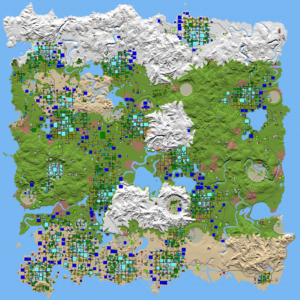 In addition to our core 4-player team, we ended up bringing in another 3 or 4 of our friends, and their friends, who had either never played the game at all before, or at least had less than 10 hours in it (I'm personally just over 200 hours in, while it's my friend's partner's favourite game, and they have over 1000 hours and counting), and we've had a... blast... taking over a military camp PoI that spawns surrounded by landmines and turning its underground bunker into our home. Playing with 7-8 people at once is... an exercise in coordination, for sure, but it's hilarious hearing the new players' reactions to certain jump scares in PoIs we've been to plenty of times, seeing certain enemies for the first time, etc.

After stints in previous playthroughs as the 'heavy armour + shotgun in a concrete pillbox / mining' guy and the 'stays at home and ascends the Intelligence tech tree to make vehicles, traps, and other cool shit' guy, I think I've settled on going for the oft-maligned Agility tree, because the Parkour skill (higher jump height, less fall damage, immune to breaking your legs, etc.) is just... too fun. On horde nights, my job is basically to run around and kite dozens of zombies back and forth just outside our walls so our snipers can pick them off without getting harassed as much. Cue Yakety Sax.

Between 7 Days to Die sessions, I like to mess around with the Paradox Grand Strategy games, like Hearts of Iron IV (also native Linux builds and basically flawless ones at that!), or even good old modded Minecraft, leveraging MultiMC to manage various modpacks and, again, hosting my own server(s) as needed - though that's on my FreeBSD system directly in Java of course.

Games I've poked at and want to come back to when our current 7D2D stint is up include Raft (also flawless via Proton), Satisfactory (again, great with Proton, though you may want to look up how to increase network usage/bandwidth caps for multiplayer), Eco, and of course, Stardew Valley.
0 Likes

Condemned and F.E.A.R. were as good as I remembered. A Dragon's Treasure and The Darkside Detective were great. Control was terrible. Bermuda; Lillith Hall were decent. Oculto was medicore.

I plan to start Evoland; Evoland 2 as well as Death and Taxes soon and then delve into a replay of Quake IV.
0 Likes

Supay 14 Feb
View PC info
An unholy amount of Valheim. It is really good. Nice to day 1 be able to play on a co-op with my friends, even if they are misguided Windows sufferers.
2 Likes, Who?

View PC info
Nothing but 60 hours of Valheim.
And some Gladiator Manager (without "s").
1 Likes, Who?

One does not simply blaze thorough Dark Souls.

Well, I did smell the roses a bit and I'm not feeling like I've missed anything important. Took 65 hours, yet it still seemed like a bullet train compared to my DS1 playthrough. I've been trying to finish DS1 for years and DS3 took only two months!
0 Likes

Not really gaming but kind-of: Advent of Code https://adventofcode.com/2020. I still have a few days to go...