Linux graphics support is still remarkably similar to how it was 20 years ago, even with all the progress that has been made in the years since. The Mesa 3D graphics library had its origins all the way back in 1995, and through the Utah GLX project attracted the attention of industry luminaries such as id Software’s John Carmack and vendors such as ATI, Intel, Matrox, S3, and 3dfx. By the turn of the millennium all of them had at least some support in Mesa.

Nvidia went a different route, one which continues to set them apart to this day. Rather than choosing to cooperate with Mesa they instead ported their Windows drivers over to Linux directly, maintaining their own proprietary binary blob separate from the main Linux kernel. This driver model was also later adopted by ATI when they switched focus to their own proprietary “fglrx” driver, although this was largely reversed again after AMD acquired the company in 2006.

By the time of Red Hat Linux 9 the Direct Rendering Infrastructure or DRI was firmly in place in Mesa and offered 3D support for a wide number of cards. This included the ATI 3D Rage Pro Turbo, which was the AGP card I had selected to test the machine. While a solid 2D performer it offered lacklustre 3D graphics even for the time of its release, and was intended more as an OEM graphics solution than for gaming. That makes them easy to find, but also not worth a lot.

Another option on hand was my old DiabloTek ATI Radeon 9200 card. I used this card in my main computer not long after I switched to using Linux full time in 2007, and with Fedora Core it offered decent DRI support that allowed me to play most games released up until Doom 3. Unfortunately this support was not mature until the release of xorg 6.8.2 with Fedora Core 3 in 2005. By that point Fedora was optimized for Pentium 4 CPUs and at least 256 MB of RAM.

Regardless, neither of these cards really matched the period of the rest of my hardware. In the late 1990s the market leader for gaming graphics was 3dfx, with their Voodoo cards still holding a hallowed status among retro enthusiasts. Voodoo held exclusive support for the Glide graphics API, making them by far the most compatible hardware solution for playing contemporary games. On eBay none were selling for less than $100 CAD with shipping. 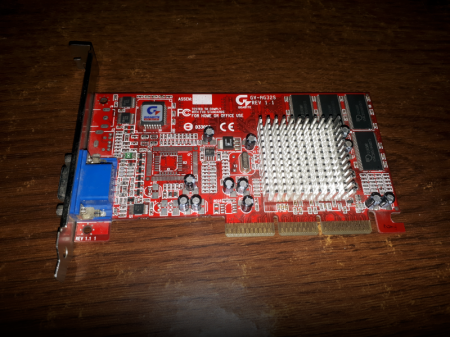 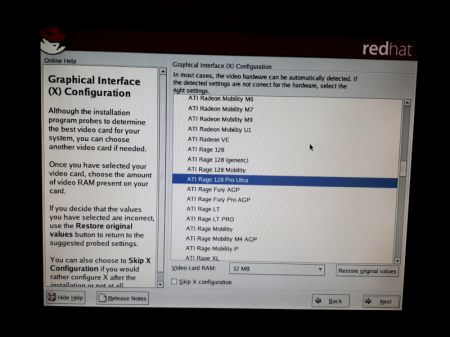 That said, Nvidia had already begun to eclipse 3dfx by 1999, who they would go on to acquire by the end of 2000. The RIVA TNT2 line boasted strong OpenGL performance as well as support for 32-bit colour output, with the TNT2 Ultra arguably being the most powerful card on the market. These too often go for well over $100 CAD on eBay with shipping, with only the inferior TNT2 M64 cards selling for cheap, being Nvidia’s answer to the OEM success of ATI’s Rage.

Further, for this project I wanted a card with good support in Mesa, something which Nvidia has never favoured. Even on modern machines I eschew Nvidia in favour of AMD or Intel, largely because I value the deeper Linux integration offered by Mesa drivers even at the cost of some performance. Not finding a lot of Linux coverage on S3, in terms of discrete graphics cards from 1999 that left me with just two other options: Matrox, or a more contemporary card from ATI.

While being obscure today Matrox made a serious attempt to break into the gaming market in the late 1990s. Famed for their sharp high resolution output and dual head support, they also offered decent 3D performance with the introduction of their G200 and G400 cards. While priced better than 3dfx and Nvidia these can still command something of a premium due to their uniqueness, with the cheapest G400 selling for over $50 CAD on eBay with shipping.

How about ATI then? After all, the release notes for Red Hat Linux 9 do specifically state support for “all existing Rage 128 chipsets” as well as for a number of early Radeon cards. In 1999 the flagship ATI graphics card was the Rage 128 Pro, also known as the Rage Fury Pro. With performance roughly on par with a stock Riva TNT2 from Nvidia, it launched as a decent compromise card bridging the gap between the demands of ATI's OEM partners and more serious gamers.

It can also be had for reasonably cheap. Sandwiched between the lacklustre 3D Rage Pro line and the infamous Rage Fury MAXX, Rage 128 cards do not enjoy the same name recognition and are priced to reflect that. In the end I paid $25 CAD for a later Gigabyte GV-AG32S OEM card, spending just a bit more than some of the other offers to buy from an established eBay seller and for 32 MB of video memory. It looked a good place to start.

Hamish Paul Wilson is a free software developer, game critic, amateur writer, and farm labourer living in rural Alberta, Canada. He is an advocate of both DRM free Linux gaming and the free software movement alongside his other causes, and more information on him can be found at his icculus.org homepage where he lists everything he is currently involved in: http://icculus.org/~hamish
See more from me
Some you may have missed, popular articles from the last month:
The comments on this article are closed.
16 comments
Page: 1/2»

View PC info
A few contemporary articles from early in the development of the DRI:

Quoting: BumadarYou can still add a voodoo2 pass through ;)

Certainly an interesting option, if I can find my way past the 3dfx tax.

View PC info
I recall back then when buying a new card really did used to up the ante of gaming possibilities. From software rendering to a 3dfx banshee (what a difference!), then hung onto that until it was time for a radeon 8500 (that actually had shaders!). Unreal Tournament on the r200 drivers is still one of the most impressive gaming experiences I've ever had: framerates beat the pants off the Windows users at LAN parties back then. Once all the coax cables were sorted.
4 Likes, Who?
x_wing 8 Mar, 2021

It's pointless. The only "beauty" of a voodoo GPU in a build is glide support, but you can already get it with nglide (and it's probably the way to go on Linux).
0 Likes

It's pointless. The only "beauty" of a voodoo GPU in a build is glide support, but you can already get it with nglide (and it's probably the way to go on Linux).

Keep in mind we are talking about building a period computer here, so doing it with the original hardware is kind of the whole point of the exercise. Just for the fun of it.

There are also a few commercial games using SVGALib on Linux that will only provide full acceleration with 3dfx hardware. Still not enough to make me shell out hundreds on the dumpster computer though.
0 Likes

View PC info
great article, i wait for the next
0 Likes

View PC info
Love these articles, Hamish. Keep 'em coming. I remember fondly my first experience of switching from software rendering to... some kind of Voodoo card, but I can't remember which one. It was life-changing. I mean that genuinely - it was the moment that crystallised the potential of PC gaming for me. First I played Deux Ex, then I played Quake. Every so often, I'd switch back to software rendering just to remind myself how muddy and uninteresting these virtual worlds were before hardware acceleration.

Back then, motherboards didn't have built-in sound either. Or network for that matter. Stacking the PCI slots in the right order to avoid contact and maximise airflow is a lost art. These days, you basically have a monster GPU... and that's it.
3 Likes, Who?

View PC info
I remember from those days that I had specifically settled for an S3 Vision 868 card because of the excellent driver that included xv support. And I did have a Voodoo2 which I managed to get to work when I switched to Linux as my primary os in 2002. Then in 2004 I did my first full Linux oriented build and got an nvidia card. Times were a bit different then.

aye, the 9200 a really nice card it's when AMD took over and it started having good open source drivers I think.

edit: It was a few years later, but when AMD took over it slowly began having decent open source support, and even before the unofficial open source community drivers were not bad at all.