My first choice was to run Red Hat Linux 9, for the arbitrary reason that it was the final release of the once dominant distribution before Red Hat switched focus to Red Hat Enterprise Linux and backed the community Fedora Project instead for home use. It was also the second Red Hat Linux release to feature the delightful Bluecurve desktop theme for both Gnome and KDE, a personal favourite of my childhood.

Although coming out a little late for the period of the machine, 192 MB was still the recommended amount of memory for graphical use, with 128 MB as the minimum. A 400 MHz Pentium II or better CPU was also advised. I knew then that I was cutting things a bit close, but I still found myself disappointed with the outcome; while the system installed and ran, even at idle Red Hat Linux 9 consumed almost all my memory.

As expected my Rage 128 Pro Ultra was recognized by the installer and DRI was loaded on first boot. The only manual configuration necessary was setting the “AGPMode” option in the redhat-config-display utility to “2”, as otherwise the card would run at AGP 1x speed. Both glxinfo and glxgears showed no issues, and the included Tux Racer game ran at an acceptable if not breakneck pace. Things seemed to be going to plan.

My next test was installing the Loki Software retail release of Quake III Arena, and the result looked to be promising. While I had to copy my system’s libGL.so.1 file to the game’s install directory in order to get it to launch, once accomplished the performance was impressive. Not only did it seem competitive with Windows 98 but Linux appeared to be outclassing it. Frame rates were more consistent, and it lacked some of the graphical artifacts I had seen under Windows.

What was not drawing correctly were the marks left on walls or the shadows under the characters, with them showing up even through solid objects. While unsightly it had no effect on the gameplay, and could thankfully be mitigated by setting both the "cg_marks" and "cg_shadows" variables in the engine console to “0” in order to stop them being drawn. All in all an acceptable compromise for a performance boost in what is a demanding game for a Rage 128 Pro. 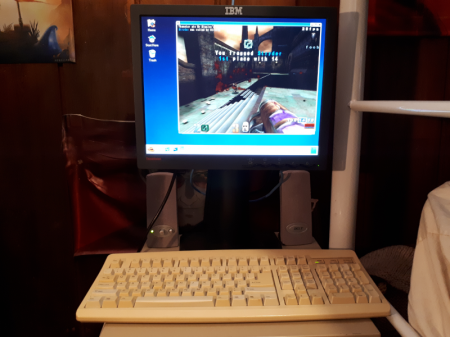 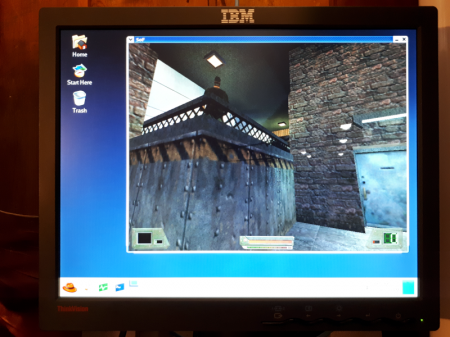 Next up was Soldier of Fortune, also released for Linux by Loki Software. Upon starting the tutorial it was immediately apparent that the same bug was manifesting itself again, with the lights in the next room shining through the wall. This time I was unable to discern any relevant console variables or commands, but I tried to soldier on regardless. Despite using the older id Tech 2 engine the performance was worse than Quake III Arena.

Both Unreal Tournament and Rune, running on the Unreal engine, showed no errors but would crash after playing for just a few minutes. I had more luck with some of the other 3D games from Loki, successfully launching the demos for Heretic II, Descent 3, Myth II: Soulblighter, and Mindrover: The Europa Project. Quake II: Colossus, this time distributed for Linux by Macmillan Digital Publishing, also accelerated fine when using the glx renderer.

The Linux demos for SiN and Shogo: Mobile Armor Division from Hyperion Entertainment worked, but the latter would crash with a Segmentation Fault unless “Disable Light Mapping” was selected in the Advanced options, and needed the SMPEG library provided in order to launch. On the whole the 3D performance did seem to be behind Windows 98 but not by all that much. What was bogging the system down more was the lack of available memory.

While not a total bust, it was becoming clear that Red Hat Linux 9 was not the best fit for the computer. A more detailed probe of the motherboard revealed I could install larger and faster 256 MB PC133 memory modules, but other than the graphics card nothing was keeping me to this particular version of Red Hat Linux. Further reading indicated that the Rage 128 Pro had DRI support going back at least as far as XFree86 4.0.3 with Red Hat Linux 7.1 in April 2001.

I settled on Red Hat Linux 7.3, code named Valhalla and released in May 2002, as this was the first to have DRI support for Radeon R100 cards and hopefully more mature Rage 128 Pro support. I was turning my back on the comforts of Bluecurve in favour of Gnome 1.4, XFree86 4.2, glibc 2.2.5, and the promise of a 96 MB recommended RAM requirement. All I needed was to buy and burn another three CD-R discs.

Hamish Paul Wilson is a free software developer, game critic, amateur writer, and farm labourer living in rural Alberta, Canada. He is an advocate of both DRM free Linux gaming and the free software movement alongside his other causes, and more information on him can be found at his icculus.org homepage where he lists everything he is currently involved in: http://icculus.org/~hamish
See more from me
Some you may have missed, popular articles from the last month:
The comments on this article are closed.
20 comments
Page: 1/2»
x_wing 15 Mar, 2021

View PC info
192 MB of ram for a PII was a huge amount. In fact, in the early 2000's we had a price spike because of the classic **ADD RANDOM CALAMITY** on ram factories. Probably a better contender for RH9 is WXP, as the memory usage also went quite up compared to W98.

By the way, do you have any bench for your games? Results for runs on Windows (98 & XP) and Linux (RH9 & RH7.3) would be great in order to compare performance on those early gaming days for Linux.
0 Likes

Indeed. If you go past 512 MB you can run into issues with Windows 98.

Quoting: x_wingBy the way, do you have any bench for your games? Results for runs on Windows (98 & XP) and Linux (RH9 & RH7.3) would be great in order to compare performance on those early gaming days for Linux.

I will be doing some timedemos with Quake at the very least once I settle on a Linux release.

View PC info
I loved Bluecurve back in the day! Never used Red Hat or Fedora, but I always pilfered the theme (and pretty backgrounds) from the rpms.
2 Likes, Who?

Oof, WinXP SP3 will choke even with 256MB RAM. The lowest I managed to take XP in its early days, without butchering it, was about 64MB RAM. But with SP3 there's no point using it without at least 384MB RAM because it needs at least 256MB RAM for itself, so you end up swapping like crazy if you have less, and then gaming on top of it... not a great move.

Red Hat 7.3 was quite decent, so I look forward to seeing it in action.

Yes, but also no. Any website secured through HTTPS will not load as the old web browers can not authenticate. You can browse unsecured websites and download files directly through wget and the like.
0 Likes

I have access to a number of loose jewel cases and even a few complete Linux game boxes to show in future articles. Not an exhaustive collection but enough to be interesting.
2 Likes, Who?

View PC info
I wasn't that much into linux gaming back in those days but my personal favourite from Loki Software was Soulride snowboard game. I wonder if this machine can handle it?
0 Likes

QuoteI tried to soldier on regardless

you really soldiered on this one Hamish, eagerly waiting for the conclusion of this journey.
0 Likes
1/2»
While you're here, please consider supporting GamingOnLinux on: