I had some grief installing Red Hat Linux 7.3 which I think was due to my CD-ROM drive not handling the disc switching well. With persistence I was able to get it installed, and despite identifying the graphics card as just being a generic Rage 128 in Anaconda it booted with DRI enabled just fine. Once again I had to set the “AGPMode” option in XFree86 to get it to use AGP 2x speed, but other than that it worked out of the box

Upon launching Quake III Arena I was surprised to see that the graphical errors with shadows and marks were no longer apparent. The same held true for Soldier of Fortune, although it did now have issues when Detail Texturing was used. The Linux demo for Shogo: Mobile Armor Division also ran even with Light Mapping enabled. It seems that a few regression bugs must have been introduced into the r128 driver after this point.

The Loki Update Tool appreciated having an older version of glibc to work with. It functioned flawlessly with the mirror still hosted at lokigames.com apart from the key server being down, forcing to me to have to cancel the GPG key checks. In a similar vein I was able to use a mirror of the old Fedora Legacy project to install yum and upgrade Red Hat Linux 7.3 to the last released system updates, including a boost to XFree86 4.2.1 for the latest packaged r128 drivers.

Not everything was better on Valhalla. Quake III Arena suffered from a frame stutter, and Descent 3 would display artifacts with multitexturing enabled. The Linux demo of SiN was also back to its usual recalcitrant self, with it refusing to recognize my libGL.so file no matter what I tried. Memory usage was down compared to Red Hat Linux 9, but it was still too high for my liking. It was time to invite over an old friend.

Even on my main Arch Linux machine I keep the Blackbox window manager around due to its low system requirements and compatibility. Once installed using a third party RPM package I found that Quake III Arena no longer stuttered from Blackbox, and the system felt lighter as a whole. From there I tried a few more games, with Unreal Tournament no longer freezing on Red Hat Linux 7.3 and the old Unreal Gold installer for Linux working without a hitch. 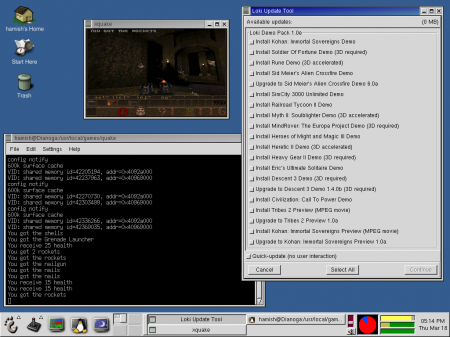 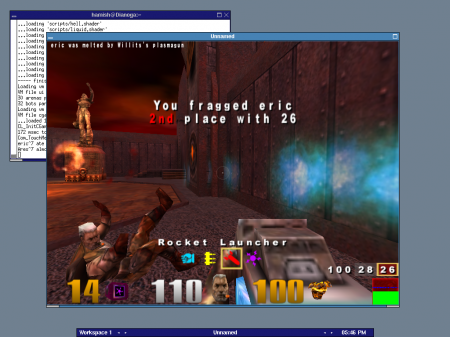 One wrinkle is that games regardless of their own video settings seem to only accept the colour depth set by the XFree86 server. Many OpenGL renderers shows Z Buffer artifacts when ran with 16 bit colours, a problem I also encountered with the Direct3D renderer when playing Deus Ex on Windows 98. Thankfully the Rage 128 Pro does have decent support for 32 bit colour depth, but the “Depth” option in XFree86 must be set to "24" to use it.

I can also debunk a claim made by author Christopher Negus in his Red Hat Linux Bible series wherein he warns that Return to Castle Wolfenstein would only run on Nvidia cards. Not only was I able to install the Linux demo but the game was actually just about playable on my Rage 128 Pro. I can certainly remember playing the demo at around this level of performance back in the day and nervously peering around each and every corner as a child.

Overall 3D performance did seem to lag behind Windows 98, further compounding the experience of using an already slower graphics card. The image quality also seemed worse on Red Hat Linux 7.3, with a noticeable grain I had not recalled seeing when using Red Hat Linux 9. In terms of compatibility though Valhalla proved to be far superior, so I decided to stick with it and focus on improving other parts of the system instead.

I took a gamble on two matched Azenram sticks of 256 MB PC133 selling for under $15 CAD on eBay; Azenram being the old FutureShop budget brand in another win for Canadiana. I also swapped the CD-ROM drive for a later LG GSA 4167B DVD drive manufactured in November 2005, as the original Creative CD5233E was proving too rough on the discs with its manual eject. With those upgrades in order, it was time to play some games.

Carrying on in Part 5: Quaking in My Boots

Hamish Paul Wilson is a free software developer, game critic, amateur writer, and farm labourer living in rural Alberta, Canada. He is an advocate of both DRM free Linux gaming and the free software movement alongside his other causes, and more information on him can be found at his icculus.org homepage where he lists everything he is currently involved in: http://icculus.org/~hamish
See more from me
Some you may have missed, popular articles from the last month:
The comments on this article are closed.
11 comments
Page: 1/2»

View PC info
Just in case anyone is interested I have prepared a guide for installing the Fedora Legacy updates on Red Hat Linux 7.3 Valhalla:
http://icculus.org/~hamish/dianoga/fedora-legacy-valhalla

Bumadar 22 Mar, 2021
Shogo: Mobile Armor Division I completely forgot about that game. Wonder how it held up over all those years. Creative cd drives where never great, well not that I can remember, so the LG is a good move
2 Likes, Who?

Quoting: BumadarShogo: Mobile Armor Division I completely forgot about that game. Wonder how it held up over all those years.

Well, I am biased as Shogo is a personal favourite of mine. My brother and I were actually gifted a signed piece of concept art by Monolith Productions as part of their 20th anniversary celebrations. It was also the first game I won with the Rage 128 Pro from the Windows 98 installation along with Blood II.

Quoting: BumadarCreative cd drives where never great, well not that I can remember, so the LG is a good move

The irony is it was the Creative drive that first caught my eye at the dump as it helped betray the age of the computer. Throws the colour off now too since the LG is not nearly as yellowed as the rest of the front of the case.

I had another earlier LG CD-ROM drive from 2003 I could have used but since I was off period anyway I figured I might as well go for more functionality.

View PC info
Redhat 7 was what got me into Linux and my first Linux experience for my Celeron 333/64MB/Intel GFX computer I had as a teenager. I got it for free on a cover CD for a computer magazine, and I instantly fell in love with it (really loved trying the hundreds of pieces of software that came with it, including figuring out what each one did).

Some of the nightmares I remember:

View PC info
Nice! :D Also update the link to this article in the previous one. 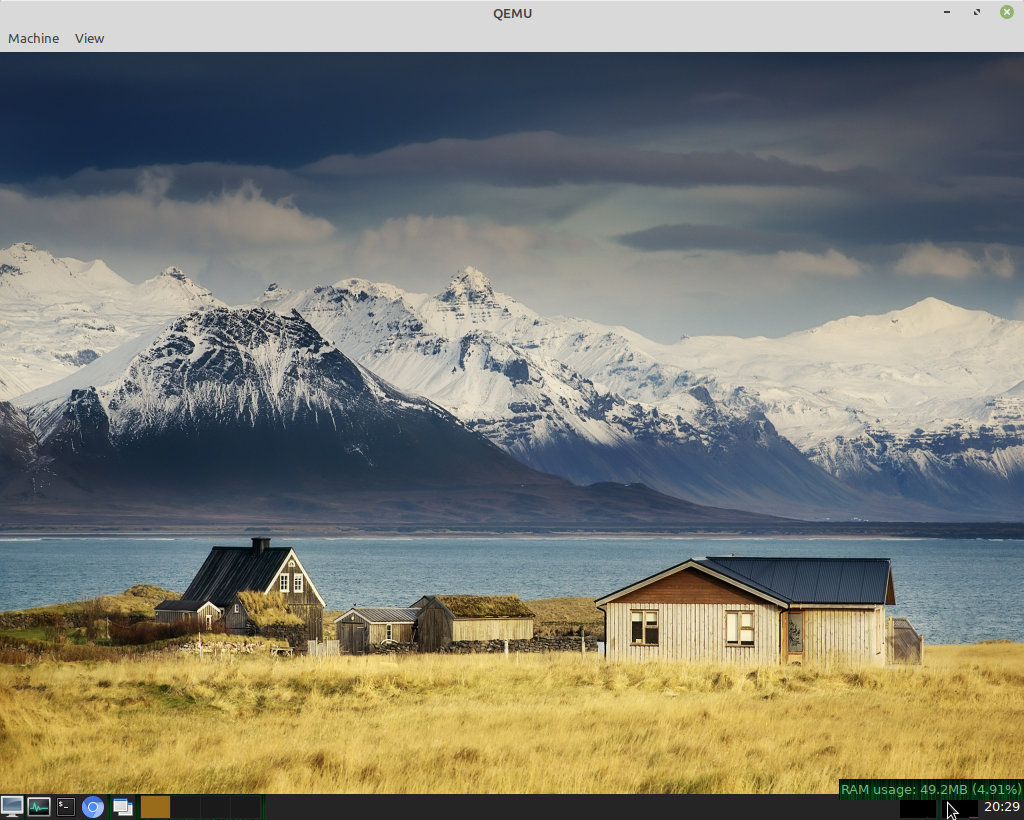 RAM usage in the bottom-right corner. :) Yeah, I "cheated" by removing pulseaudio because it's just a VM meant for a few browser tests not involving audio, but it's around 60MB with it.

For eye-candy I added the DarkMint theme, the elementary Xfce icon theme, the good old Onyx for window borders, and gnome-wallpapers (just to see what images that would bring in). :)

So it's kind of retro, but it's not. Oh, Minetest needs more RAM. I installed 5.3.0 from buster-backports and it runs fine, but 1GB RAM is not ideal for longer sessions. :P But for Quake and other stuff... it should be awesome. I should actually try a few older games. :) 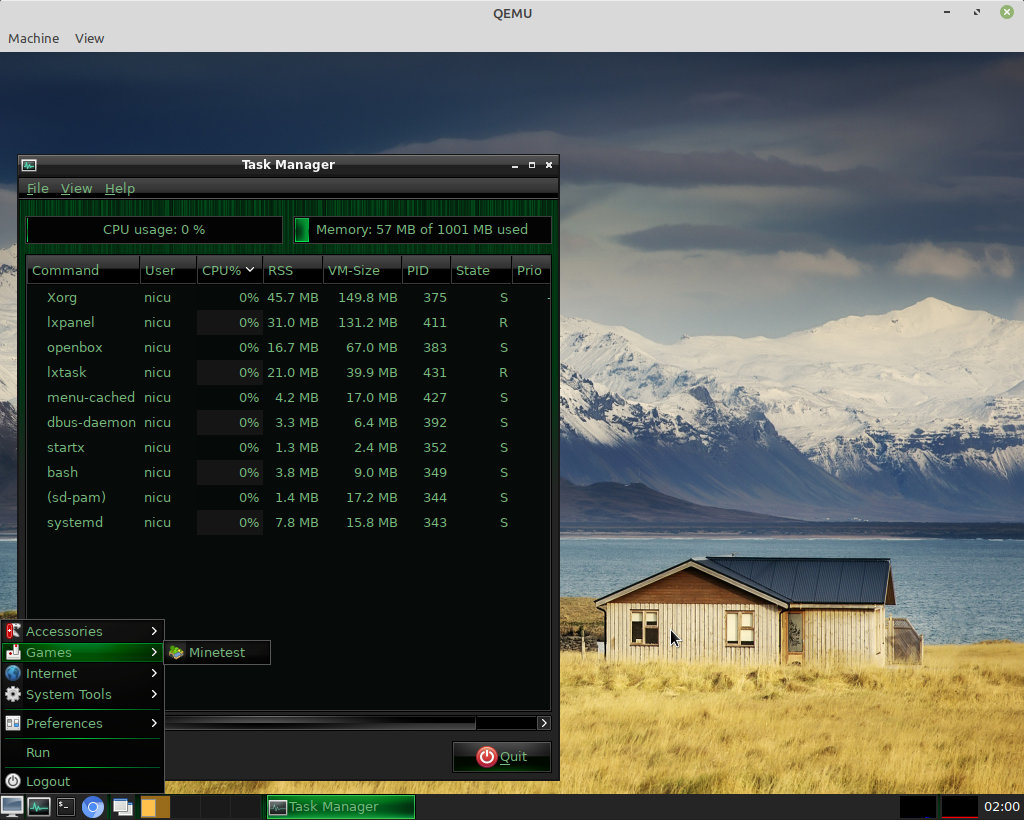 View PC info
Nice update. Regarding the driver problems you mention, couldn't they be related to your Mesa version? Maybe the regressions are not related to the kernel.
0 Likes

View PC info
This series would have made for a great read in one of those defunct pc gaming paper magazines.
1 Likes, Who?

Quoting: kneekooNice! :D Also update the link to this article in the previous one.

You always forget something. Fixed now.

Quoting: x_wingNice update. Regarding the driver problems you mention, couldn't they be related to your Mesa version? Maybe the regressions are not related to the kernel.

It almost certainly is a problem in Mesa, which is what got me using Fedora Legacy in the first place as I wanted to see if the issues were fixed in an update for Red Hat Linux 9.

Regardless, I am better off sticking with Valhalla or any other distribution with a glibc older than version 2.3 for the best compatibility with Loki games.
2 Likes, Who?
DigitalSin 24 Mar, 2021

View PC info
I would suggest giving SuSE a shot.

Everything about SuSE back then is superior, it's so heavily modified compared to other distros at the time, i.e. the kernel and XFree86.

7.3 had a real animated bootup that is superior to even today standards. Check it out!
0 Likes

Quoting: DigitalSinEverything about SuSE back then is superior, it's so heavily modified compared to other distros at the time, i.e. the kernel and XFree86 ... 7.3 had a real animated bootup that is superior to even today standards. Check it out!

While I am not opposed to possibly playing with other distributions at some point, you are trying to sell this to a guy who is not even running a display manager on his modern Arch Linux machine.