Aliens: Fireteam Elite is out and works right away on Linux with Proton

Aliens: Fireteam Elite from Cold Iron Studios is a brand new co-op third-person shooter, which is out officially today and it works right away on Linux with Steam Play Proton. Note: key personally purchased.

Since I am an absolute fanatic when it comes to the Alien franchise, I couldn't pass up this opportunity. Not only that, we don't get a lot of good online shooters that work on Linux with so many blocked by anti-cheat. Thankfully this is one game that seems to just work. Testing with the latest Proton 6.3-6, everything appears to work out of the box.

It's pretty clear that this is something of a budget game though. It's nowhere near the quality of Alien: Isolation but it's the first reasonably good Aliens shooter we've had in a long time. Remember Colonial Marines? Gearbox destroyed that and my hopes of any future alien blasting games. Also a surprise to even see this being released since Cold Iron has been through multiple owners which complicated the development.

Here's how it looks on Linux with Proton: 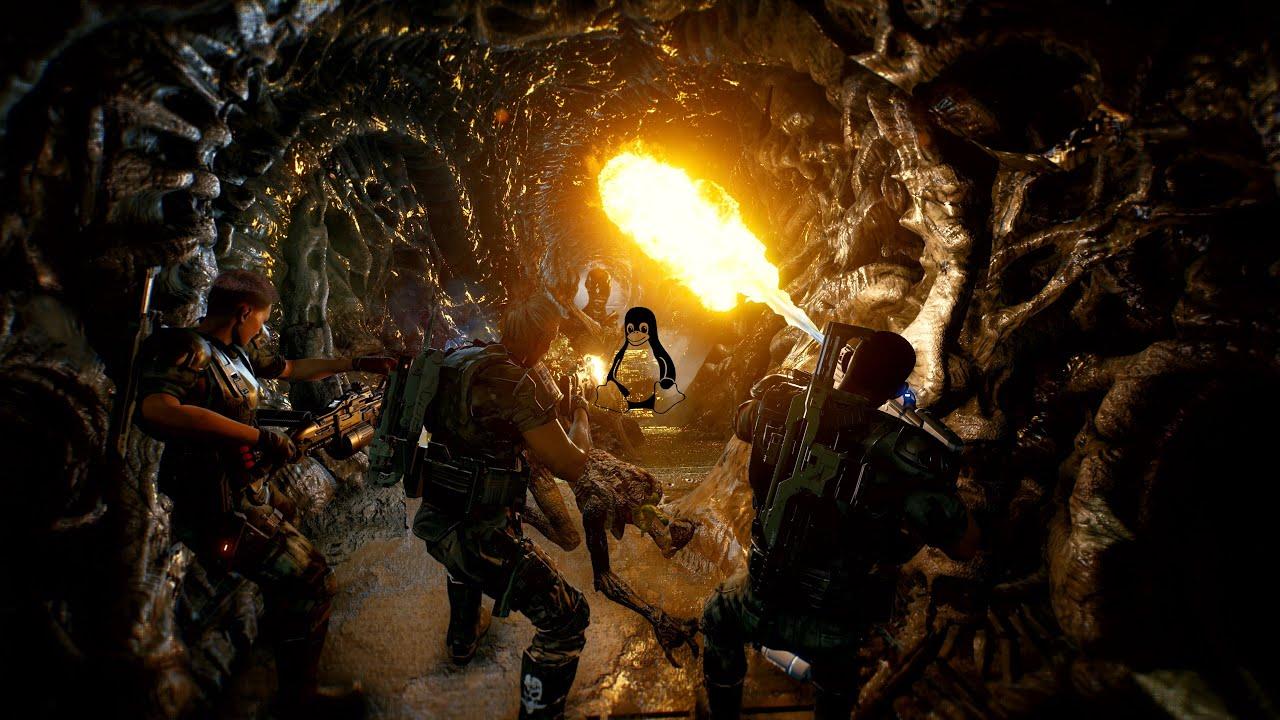 Running it on Linux everything seems to work reasonably well. The initial short cutscene (if you can even call it that), NPC voices, matchmaking, gamepad or mouse both work fine. On Linux though, there's the notable stuttering and frame-drops when you load it up for the first time since we are running it through a compatibility layer, which needs to load everything in and build up a shader cache. It doesn't take long for that specific issue to smoothen out though, so it's just an initial inconvenience.

There's also a few settings with the MangoHud overlay (top left in the video) that will cause performance to drop severely. Even when not recording though, performance is wildly all over the place. Here's where the fun vanishes: with my 2080 Ti, it will go from over 100FPS and randomly drop down hard to 30-40FPS but with no clear reason why. Some firefights with tons going on stays over 60FPS happily, while I've seen other smaller fights flick all over the place. Sometimes it seems that each time you just fire your gun it turns into a terribly stuttering mess for the entire mission. The performance just isn't great. Thoroughly annoying because it swings so wildly between perfectly playable one mission, not so the next. So yeah it works but the experience is a nuisance more than anything.

As mentioned it's a budget game, and that's pretty clear (if the lower than usual price didn't give it away). For example: voiced dialogue for NPCs is great but characters just stand staring at you with no lip syncing. It's a little funny to see from a brand new release, especially for a major franchise but you don't see much of it so it's a minor issue. They clearly spared the expense on any cutscenes too, of which there's basically none. It's all about the running and gunning. There's also no FOV slider, so it's pretty claustrophobic. There is a keybinds menu though, so you can happily set up the controls how you want them.

I'm a simple man - I like to run around shooting Aliens as if I'm a Colonial Marine and this hits the mark for that when it works well enough. Living out that fantasy gives you an initial high while playing. The fact that I can do it on my favourite operating system day-1 is lovely thick chocolate icing on top of the cake. However, it's not going to be for everyone because it really is quite a basic cover shooter. Fun to see aliens hopping from wall to floor and swarm you, so it's very much like Left 4 Dead Aliens. It's repetitive in exactly the same way all other horde-style shooters are.

Aliens: Fireteam Elite will keep me busy for the next week but after that? It remains to be seen if it has any staying power. It's fun enough for now but it's not massively exciting once you've played a few rounds and the performance is problematic. The developer has plans for a bunch of free post-release content and any extra purchasable content will only be cosmetic.

You can buy Aliens: Fireteam Elite from Humble Store and Steam.

View PC info
This game seems to have forgotten that xenos have acid for blood.
4 Likes, Who?

View PC info
Aah, nice to see. I guess I know what to test this evening!
I'm such a big fan of the Alien franchise... I loved AvP 2010 and Alien: Isolation... yeah, even Aliens: Colonial Marines is not too bad (if you play coop, the DLC or Bug Hunt mode).
3 Likes, Who?

The movement speed feels a bit slow and I'm not a fan of 3rd person... and yet... this looks pretty fun! Enemy variety is an issue, I suppose, but you don't play an Aliens game for enemy variety, and even there, they've added some classifications in to keep it fresh.

Might go for this, to be honest. Even if they lumber it with anti-cheat (like similar co-op game, Vermintude), hopefully we'll have a fix for that later this year or early next anyway. And it just looks fun!
2 Likes, Who?

View PC info
Ha, this still makes me think we should have a different section for 'Don't Buy, it doesn't work in Proton', as it's seriously getting to the point where there are less titles that don't work than there are ones that do.
0 Likes

Quoting: slaapliedjeHa, this still makes me think we should have a different section for 'Don't Buy, it doesn't work in Proton', as it's seriously getting to the point where there are less titles that don't work than there are ones that do.

We have to pick and choose what we cover really because we don't have enough funding to constantly buy games, and most AA/AAA ignore us completely so it's down to my own choices.
2 Likes, Who?

Quoting: slaapliedjeHa, this still makes me think we should have a different section for 'Don't Buy, it doesn't work in Proton', as it's seriously getting to the point where there are less titles that don't work than there are ones that do.

We have to pick and choose what we cover really because we don't have enough funding to constantly buy games, and most AA/AAA ignore us completely so it's down to my own choices.

Oh for sure, I wasn't suggesting you personally buy games that may or may not work. I was saying that we could have a dedicated section in the forum for people who have tried a game, and it didn't work and then warn not to try it. I know we have ProtonDB, but the accuracy on some of them is a little off. Like people will say it's Platinum when you have to do a bunch of tweaks to get it to work, though after it works flawlessly. So in that case they should be Gold... I have a huge library of games I can test and report on.

Doesn't even have to be Proton games, some native games have stopped working well or at all, as well.
1 Likes, Who?

View PC info
Played the game today with 2 mates for 3 hours. Though I had one freeze which recovered after some seconds and one hard freeze where I had to kill the game, it was an enjoyable experience. Barely those typical shader stutter lags, mostly 60 FPS all the game. We played the first campaign with its 4 missions, and the first mission of the 2nd campaign.

Can't wait to continue playing this.
2 Likes, Who?

View PC info
Wow that's intense. I was a huge fan of aliens vs. predator 1 and 2.
I just love those pulse gun sound effects.
Great to see a new fun aliens game.
3 Likes, Who?
1/3»
While you're here, please consider supporting GamingOnLinux on: