Well this is certainly a surprise. YoYo Games have announced an early Beta for GameMaker Studio 2 version 2.3.4 that brings with it a new IDE for Ubuntu Linux. So you can make GMS games on Ubuntu now.

YoYo are very clear that they're continuing to only support Ubuntu directly, so don't expect it to work or to get support on other distributions. They've also changed the editor to use SDL for all input and audio output, which they say fixes some long standing differences between the editor on different platforms and to "better support modern input devices and new OSes going forward". Not only that they're also using FNA3D, the 3D graphics library for FNA, across all platforms for the editor too.

It currently comes with some known issues including:

Considering just how popular GameMaker Studio 2 is, this is a big win for Linux overall. Looks like being acquired by Opera Software earlier this year is going well then.

See their announcement, with links to the current changelogs.

I am the owner of GamingOnLinux. After discovering Linux back in the days of Mandrake in 2003, I constantly came back to check on the progress of Linux until Ubuntu appeared on the scene and it helped me to really love it. You can reach me easily by emailing GamingOnLinux directly.
See more from me
Some you may have missed, popular articles from the last month:
10 comments
stevepdp 6 Aug, 2021

...and with Unity steadily improving their support, and The Linux Foundation's recent announcement of the Crytek and Lumberyard-derived O3DE too - gamedev on Linux has a very bright future.
15 Likes, Who?

elmapul 6 Aug, 2021
View PC info
a bit too litle to later for me, i'm loving godot already.
but good for those who use Gms2.
anyway, i cant wait to use those things on an steam deck!
1 Likes, Who?

View PC info
This is really great, I remember reading a post by someone on reddit who couldn't switch to Linux because of this software. Wouldn't be surprised if this is Steam Deck related!
4 Likes, Who?

...and with Unity steadily improving their support, and The Linux Foundation's recent announcement of the Crytek and Lumberyard-derived O3DE too - gamedev on Linux has a very bright future.

And with the Steam Deck, you could even develop handheld games on a handheld gaming device! With Linux!

View PC info
Nice wouldn't have thought this would happen.
But there is also still Enigma-Dev as a reimplementation of Game Maker.
https://github.com/enigma-dev/enigma-dev
1 Likes, Who?

Valve did have Blender running on the docked Deck when they got journalists in to do their hands-on.
1 Likes, Who? 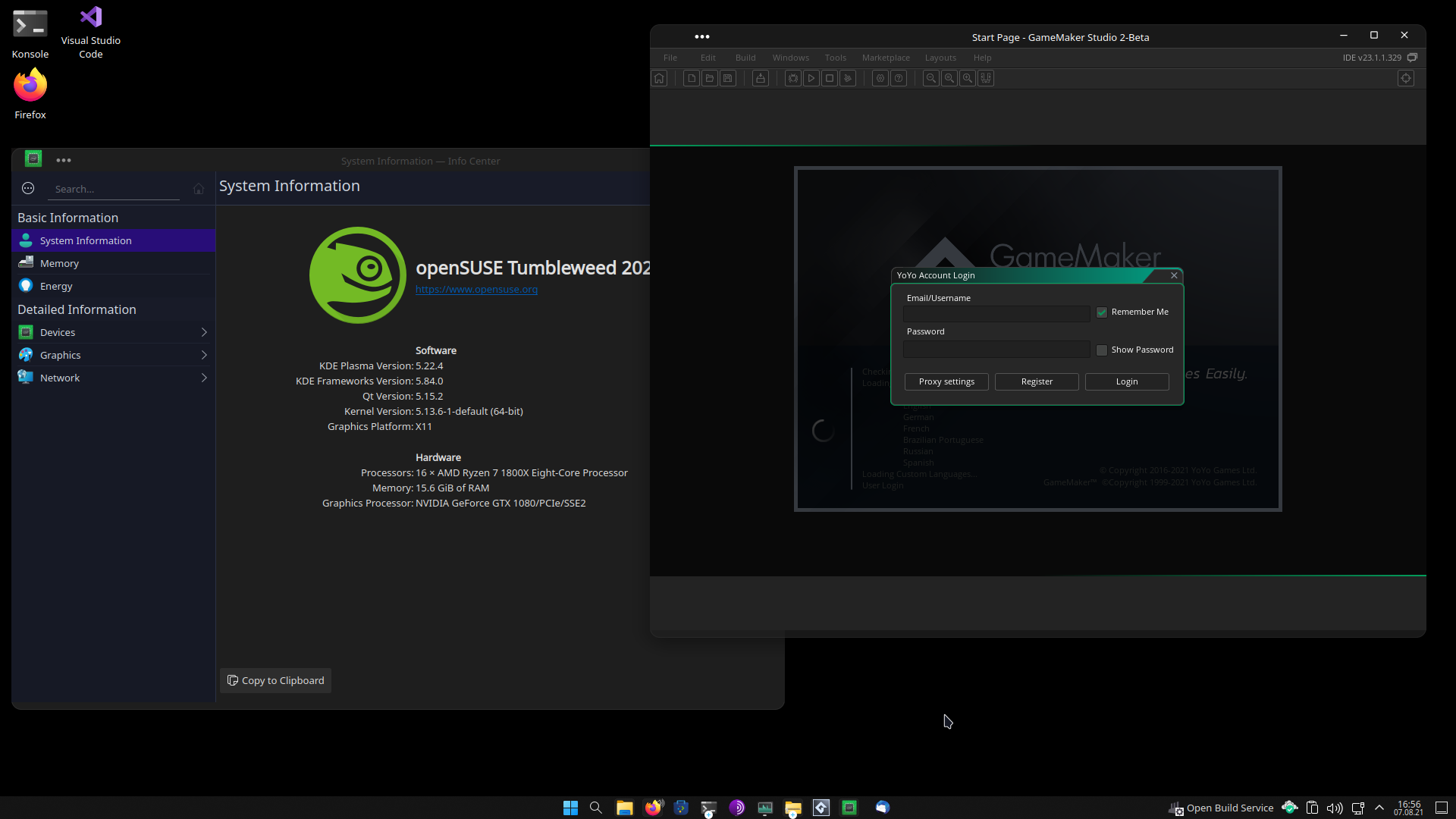 So much for Ubuntu only :P

Quoting: Vortex_AcheronticSo much for Ubuntu only :P

It's a cool idea. Since the early Canonical-Unity days I've hoped for a converged setup capable of running creative apps. I never imagined it would come in the shape of a games console 😂. I've got a reservation in for 2022, but it's only the base 64GB eMMC model.

Agreed. It's nice to see so much movement in the games space.
1 Likes, Who?

Have to admit it's such a cool idea.
0 Likes
While you're here, please consider supporting GamingOnLinux on: