We've seen plenty of gamepacks and mods for various things running on GZDoom and some are pretty awesome but the upcoming Selaco looks like it's going to be one of the absolute best. To think that GZDoom started off its early life as the somewhat simple ZDoom, another source port of the old Doom engine that eventually added more advanced features over time and now it's spawned a massive community of people making entire games with it.

Selaco may not have a real release date yet but that doesn't stop us being excited about it because it looks awesome. Inspired by the F.E.A.R game series while still mixing in traditional retro-FPS elements from the likes of Quake and Doom but still having plenty of modern features. The developers say "Selaco is a fully fleshed out world full of character, action, and mystery".

Check out their brand new footage below that appeared during Realms Deep 2021: 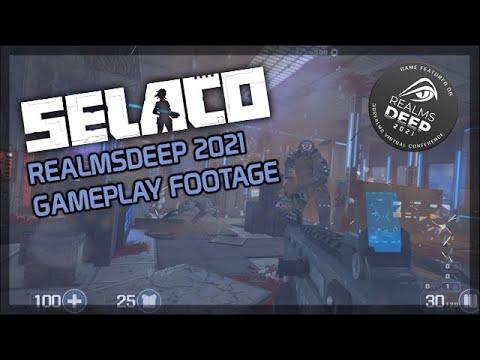 At release it's planned to have a lengthy single-player story campaign, with the world being quite interactive. Bullets will "react properly with any materials or objects you hit" and so you can expect plenty of destructive action scenes. The AI is what makes it exciting though, with so many first-person shooters having (let's face it) pretty boring AI even now. Altered Orbit Studios say having a "proper AI" was a big goal, with enemies fully aware of each other and work together to try and take you down. They won't sit still, they will find cover and try to break you out of cover if you sit for too long.

View PC info
Looking good. But why is it hard to believe that it's using gzdoom?
1 Likes, Who?

QuoteAltered Orbit Studios say having a "proper AI" was a big goal, with enemies fully aware of each other and work together to try and take you down. They won't sit still, they will find cover and try to break you out of cover if you sit for too long.

Oh, I having tears of joy after reading this.

In a world were a 16 core desktop CPU is a reality, it is ironic that a retro-looking game is making a effort to do nice AI and physics, while advanced AAA "ray tracing" games go on the other direction. We have 16 core CPUs now people (not we the poor, but you get the point). It is time to put those to work in favor of gameplay, not anti-piracy measures.
11 Likes, Who?

View PC info
Wow, it's gorgeous. Reminds me a bit of void bastards in some way, though void bastards got repetitive rather quickly, so I hope there's a lot of various content in this one!

I had a look at their steam page though, and the flashlight could be improved... Perhaps with a raytracing mod at some point? :P
1 Likes, Who?

View PC info
The quality of the environments, the animations, the sound design - this whole project just oozes quality. Absolutely superb.
2 Likes, Who?

View PC info
I would love to see a multiplayer implementation of this. And there is no license listed yet. Does anyone know if the code will be withheld from us?
0 Likes

View PC info
"Altered Orbit Studios say having a "proper AI" was a big goal, with enemies fully aware of each other and work together to try and take you down. They won't sit still, they will find cover and try to break you out of cover if you sit for too long."

I'll believe it when I see it. Good AI is one of the most difficult things to properly implement. I hope they pull it off. Video looks awesome BTW.
3 Likes, Who?

Quoting: EhvisLooking good. But why is it hard to believe that it's using gzdoom?

Well, the majority of stuff in GZDoom that I've seen has been very classic Doom styled, whereas this is very different. Of course there's examples that have also gone way beyond original Doom but most of them stick closer to the retro.