Valve talk about learning from mistakes with the upcoming Steam Deck

As we all know the Steam Machines didn't go anywhere and Valve have clearly learned a lot from it, as they spoke about in a recent video from IGN (as IGN continue to have the exclusives on this).

Valve are no stranger to hardware at this point of course. They didn't just do the failed Steam Machines but also produced the Steam Link, Steam Controller, worked with HTC for the original Vive and they also have their Valve Index VR headset too. By now, they have hopefully enough experience to know exactly what they need to make a success out of the Steam Deck and so far everything is looking rather positive on that.

Designer Greg Coomer actually mentioned how "we actually did start out by working with other companies and seeing what we could make happen with partnerships, but it became clear we started prototyping and more and more we just started creating devices to solve problems for customers ourselves and really the Steam Deck feels like the culmination of a lot of that earlier work". Coomer goes on to directly mention their earlier stuff like the Steam Machines, Steam Link and also the Steam Controller.

Scott Dalton, another Valve designer, also mentioned how early prototypes of the Steam Controller had a screen too and they wanted it to be programmable, and they thought about having Steam Link hardware with a controller but the technology at the time just wasn't good enough and they faced lots of hurdles with it and they continued prototyping and talking about it for some time. So the Steam Deck really is a device they've had in mind for years.

Proton was mentioned too with Designer Lawrence Yang mentioning how it was "really important for us to be able to talk directly to developers, and say 'hey look the Steam Deck runs your game you don't have to port'" with Coomer following up to mention how it's been a "chicken and egg problem with the Steam Machine of the content being there, we were trying to get games on Linux but then you had to have this crucial amount to get over this hump but then without the user base and you get into this bad cycle. That led us down this path of Proton now there's all these games that run so you've crossed over that hump and you're on the good side of it". 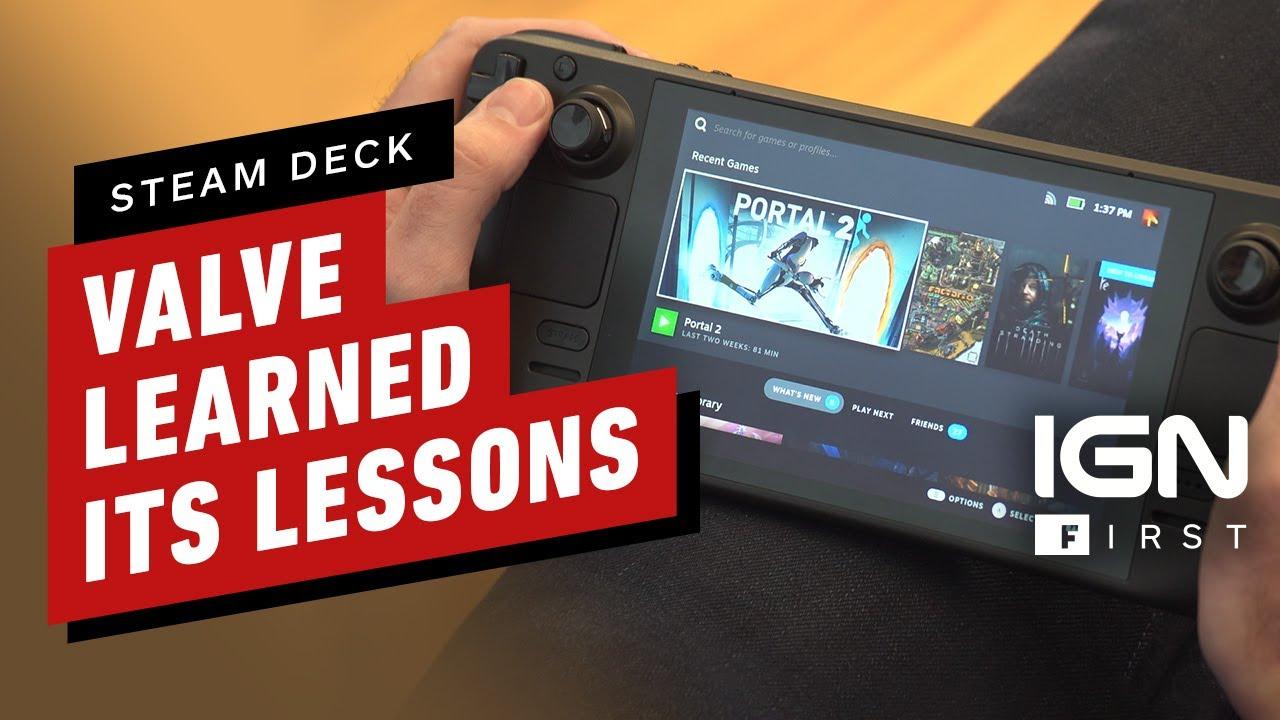 Still excited for what will happen this time.
1 Likes, Who?

As an end-user, that's all i ever needed. And the fact it's still growing and improving, is such a good feeling. With the risk of sounding like a fanboy (which I try not to be), I really feel very well taken care of by Valve. Hopefully they will remain positive and beneficial for much longer into the future (cuz in my experience all companies tend to eventually disappoint and then even cause harm)

View PC info
I'm really hoping that we'll see the end of Linux "ports" with this, and instead actually get games to develop with it as a native target and not something you need to hire a consultancy firm to develop as an afterthought.
Nothing at all against the likes of Aspyr or Feral, but since they're not the original developer they just can't guarantee to keep parity and pace with the "real" version of the game, and that can actually hurt the Linux gamers when their friends are on other platforms.

Had times where I've had to switch away from the native builds simply because a patch released recently and the port hadn't had time to be updated in time for when friends wanted to play, and once that happens then it usually ends up easier to just stay on the Proton-wrapped Windows version instead of flip-flopping between the two.
7 Likes, Who?
kuhpunkt 2 Aug, 2021

Isn't the Steam Deck also just a Steam Machine? It's a PC with SteamOS preinstalled.
3 Likes, Who?
Mal 2 Aug, 2021

That one was the defeat condition for SM. It still is for the Deck unless they can bribe or work around EAC somehow.

Then the Deck needs also to be "usable" enough with games with poor GUIs. The annoying situations where the dev just took for granted that you have m+k in additiona to a controller. From having the mouse arrow annoyingly sit in the middle of the play screen (and no easy way to tell Steam that you need mouse control just to get rid of that), to your average useless cancer launcher, just being impossibly tedious to work through and always sitting behing the "launch game" button and your damn game.
0 Likes

It's a Steam Machine... with huge parts of the Steam library working, dedicated hardware people can aim for, and for mobile gaming. So... rather no. :)
2 Likes, Who?
dindon 2 Aug, 2021

Custom APU, handheld, new OS adapted to form-factor, no man in between as Valve build the whole thing whereas for Steam Machine I believe Valve only released the OS. Quite different I'd say.
5 Likes, Who?

View PC info
I still think the main reason steam machines failed (apart from the lack of marketing) was Valve rushing SteamOS without "fully" understand Linux and it's limitations before, which it's a thing that's not the case nowadays.

View PC info
Same video every time... Just holding Deck in hands, but not showing it lol.....
Only this stupid gameplay clips witch we have seen 100 times already.
Just show us lol!
0 Likes
1/4»
While you're here, please consider supporting GamingOnLinux on: