Steam not working right on Arch Linux? It's an issue with FreeType and there's a fix

If you're using Arch Linux or anything based on it (or other rolling update distributions) and you've recently run updates that included freetype2, you might unfortunately notice that Steam is now quite broken.

When loading any part of the Steam client that depends on web views, it will just give you a rather unhelpful black screen. This is obviously a big problem and makes it all quite unusable. So what can you do? Well, if you're comfortable with your package managing you could downgrade freetype2 back to version 2.10.4 but that can then end up breaking future updates that depend on the newer version. Valve are hot on the issue though and they've already put up a fresh Steam Beta with a fix.

Valve contractor Timothee Besset commented on GitHub to say it's "Today's beta update comes with a fairly significant change to the way we setup the runtime environment for the web views. Please test that this addresses the issue on all affected distributions!". So if you're seeing the black-screen issues, try out the latest Steam Beta. Doing so is easy by just loading up Steam settings and then look for the red boxed area shown below: 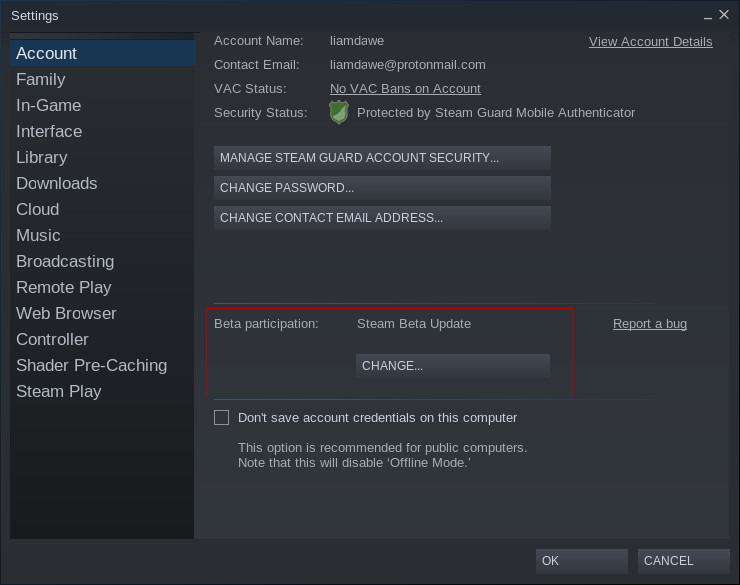 Arch Linux does at times have issues like this, because updates are constantly rolling so issues end up being found much quicker - which also means by the time other distributions upgrade (like Ubuntu every 6 months) the issues are likely solved by then.

We do often include affiliate links to earn us some pennies. We are currently affiliated with GOG and Humble Store. See more here.
About the author - Liam Dawe
I am the owner of GamingOnLinux. After discovering Linux back in the days of Mandrake in 2003, I constantly came back to check on the progress of Linux until Ubuntu appeared on the scene and it helped me to really love it. You can reach me easily by emailing GamingOnLinux directly.
See more from me
Some you may have missed, popular articles from the last month:
52 comments
Page: 1/6»

View PC info
Nice to see Valve responding quickly on this.
5 Likes, Who?

thats correct and to make it even clearer, Steam OS is no Rolling release like Arch, so if Valve doesn't take Steam OS seriously then it will be outdated after a very short time! same as it was with Steam OS 1 + 2.
0 Likes

View PC info
I kinda brace myself since some people love to point fingers at things like this and claim that Arch is a bad/buggy/difficult distro. I ran it for many years and something big like this happened maybe once or twice a year and always had a simple fix; it's darn solid. I am pretty sure I had more problems with my distro of choice's last upgrade than my entire Arch days..
7 Likes, Who?

View PC info
Hmm funny, I had an issue where the update notifier came up, in the area where the release notes are listed, starting with the date, it was black and sometimes when I started the update, the text would show up for a split of a second before the window closes. I wonder if that is related, but I'm on Kubuntu, not arch.

Well I'll see after next update I guess!
3 Likes, Who?

View PC info
This is hardly exclusive to Arch. I've been experiencing this problem on Pop OS 21.04, though strangely only on KDE and not with Pop's Gnome variant. (Presumably this can happen on Ubuntu 21.04 as well?) Glad Steam took care of this issue, the beta fixes it!
2 Likes, Who?

View PC info
TBF, this is one of those reasons why I always let updates go a week or two before I update. Windows taught me that updates can break things, and it's best to let an update get tested in the wild and hotfixed before I update.
2 Likes, Who?

View PC info
I'm on beta, and i still have this issue.
1 Likes, Who?

Quoting: axredneckI'm on beta, and i still have this issue.

Just rollback freetype2 to the precedent version fix it. Add it to ignorePkg and wait the fix.
0 Likes

Quoting: riidomHmm funny, I had an issue where the update notifier came up, in the area where the release notes are listed, starting with the date, it was black and sometimes when I started the update, the text would show up for a split of a second before the window closes. I wonder if that is related, but I'm on Kubuntu, not arch.


Same here. Arch with Xfce, though... It's quite a while like that.
0 Likes
1/6»
While you're here, please consider supporting GamingOnLinux on: