System76 creating their own desktop environment written in Rust

Do we need another desktop environment? There's already KDE Plasma, GNOME Shell, Xfce, MATE, Cinnamon and the list goes on for a while. System76 at least seem to think another is needed, one they control.

The news tip comes courtesy of System76 engineer Michael Murphy, who mentioned on Reddit their plans for it to be "its own desktop" and that it won't be based on GNOME like their most recent attempt with Cosmic but instead "it is its own thing written in Rust".

It's not a whole lot to go on right now but interesting regardless, because System76 are one of the biggest vendors of Linux hardware and they're the maker of their own Pop!_OS distribution based on Ubuntu. So they already supply the hardware, the distribution and later the desktop too. This will put them in quite a unique position, since they will have even more room to fully tailor the experience for their customers. 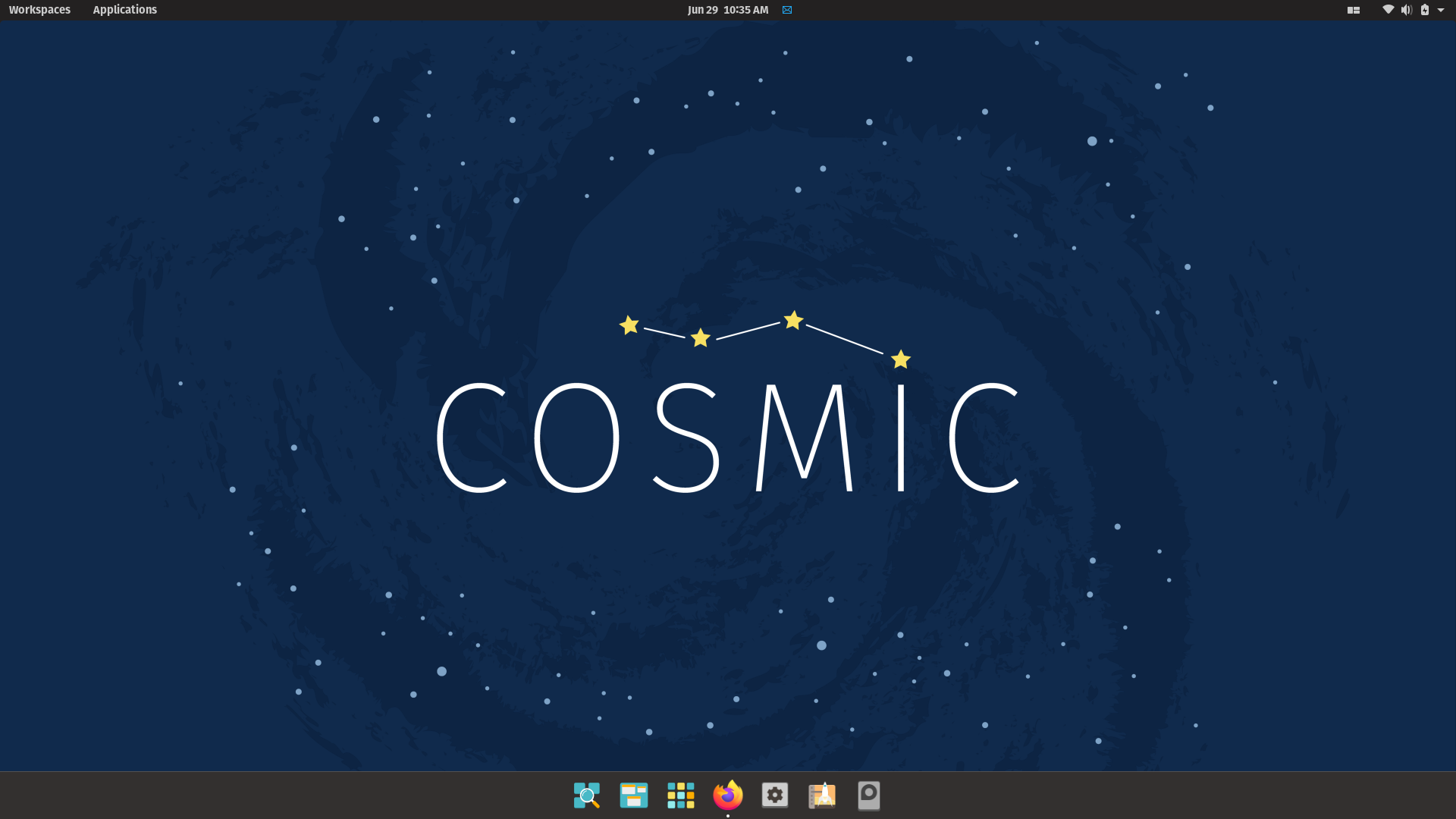 Not a huge surprise either, considering if you follow the System76 crew closely, you might have seen some friction between System76 engineers and GNOME recently with things like theming and customization. Seems there's some deeper technical problems that lead to this decision though.

Part of the problem appears to be the extensions system in GNOME, which many users of GNOME will know how twitchy it can be and how extensions often break with new GNOME releases. Discussing this Murphy mentioned "What are you expecting us to do? We have a desktop environment that is a collection of GNOME Shell extensions which break every GNOME Shell release. Either we move towards maintaining tens of thousands of lines of monkey patches, or we do it the right way and make the next step a fully fledged desktop environment equal to GNOME Shell.".

Murphy continued explaining some of the reasoning behind the decision, in reply to a user asking about what they plan to do versus GNOME to which Murphy replied "Significantly better stability over GNOME Shell, with much less resource usage, and more configurable out of the box. Achieving a modern software architecture for the desktop in Rust.".

What do you think to this? Let us know in the comments.

We do often include affiliate links to earn us some pennies. We are currently affiliated with GOG and Humble Store. See more here.
About the author - Liam Dawe
I am the owner of GamingOnLinux. After discovering Linux back in the days of Mandrake in 2003, I constantly came back to check on the progress of Linux until Ubuntu appeared on the scene and it helped me to really love it. You can reach me easily by emailing GamingOnLinux directly.
See more from me
Some you may have missed, popular articles from the last month:
55 comments
Page: 1/6»

View PC info
If it includes good tiling (sway or bspwm like) and multimonitor workspaces I'll switch
6 Likes, Who?

View PC info
This is the best thing that came recently to Linux world. System76 and Solus described it really well why GNOME devs decision is opposite to what you could expect from a open-soft desktop environment. Can't wait for both systems release. Both are strongly rust orientated so will be fun. At the moment GNOME isn't user friendly and workflow suck. I love Budgie from Solus team.

View PC info
I'm keen for this. The decision by gnome to cut a bunch of features and then push everything to buggy, javascript extensions has made my desktop experience worse than it was 10 years ago. Sure, it looks a lot prettier, provided you don't break your experience with lots of extensions.

I want a slick, highly usable, modern DE, that preferably doesn't look like Windows. Gnome is the only decent contender at the moment, but it's not great. Canonical's Unity, once the bugs were fixed, was actually really good. We need something like this again.
5 Likes, Who?

M@GOid 9 Nov, 2021
View PC info
I don't know if this will succeed. Making a competent, feature rich DE is a massive job. I will not be surprised if they realize their "Blender Moment" (fine, I will make my own DE, with blackjack, and hookers), and simply start to work growing a smaller DE, like XFCE, based (or completing the port to) GTK3 and implementing Wayland support.
3 Likes, Who?

Quoting: drmothI'm keen for this. The decision by gnome to cut a bunch of features and then push everything to buggy, javascript extensions has made my desktop experience worse than it was 10 years ago. Sure, it looks a lot prettier, provided you don't break your experience with lots of extensions.

I want a slick, highly usable, modern DE, that preferably doesn't look like Windows. Gnome is the only decent contender at the moment, but it's not great. Canonical's Unity, once the bugs were fixed, was actually really good. We need something like this again.

It is shocking how much bridges the Gnome devs burned over the years. Canonical only went back to them after facing bankrupt and still their developers do have friction issues. I wonder who back them up inside Redhat to continue in this path of scorched earth.
6 Likes, Who?

View PC info
If they can get other distros to help share the maintenance burden, that will make things a lot easier. The Ubuntu devs have also expressed dissatisfaction with Gnome's approach, and they're Pop's upstream, so they would be a good asset if they could be persuaded to join in. Of course, Ubuntu devs are going to be concentrating on their next LTS release right now and really won't want to swap out desktops just at the moment, and the Pop devs might be wanting to use their new DE to differentiate themselves from their upstream anyway. There was a third distro, too, that was grumpy with Gnome, but I can't remember which one right now.
1 Likes, Who?
eldarion 9 Nov, 2021
So why are they not switching to KDE? Creating a good DE is no easy task and I don't think they have the means to do that or are they prepared to support it in the long run. I have zero expectations on this.
8 Likes, Who?

View PC info
I don't like this. Already if you use Gnome, but maybe you like Ark, you cannot drag files from Ark to Nautilus. We love all the choice, but we're half forced to use "pure" desktop environments to ensure a consistent experience. Mixing apps from different desktops mean loads of additional bloat and applications that look like they do not belong together.
0 Likes

View PC info
From a VR perspective, I like my XRoverlay, so I'm stuck on either Gnome or KDE. I changed to KDE a couple of months ago and it's a pretty much near-perfect replica of what I had under Gnome, so I'm also surprised that the Pop devs are choosing to roll their own.

Exciting, but I don't hold out much hope for their success. If a company like Canonical couldn't justify making 10 years worth of Unity development stick, I doubt System76 will somehow make it work either.

I'm still happy to use Pop as a base for KDE though. It's a really slick foundation. The Pop shop is superb and I've never experienced a crash since using them.


Quoting: drmothI want a slick, highly usable, modern DE, that preferably doesn't look like Windows. Gnome is the only decent contender at the moment, but it's not great.

Only contender? You're joking, right!? KDE is superb, XFCE was excellent last I tried. Budgie is slick as hell. Cinnamon? Mate? We're tripping over DE's that absolutely rock - functional, beautiful, varied desktops that only look as much like Windows as you actually want.

Quoting: eldarionSo why are they not switching to KDE? Creating a good DE is no easy task and I don't think they have the means to do that or are they prepared to support it in the long run. I have zero expectations on this.

Arguably, making KDE stable is a heoric task and Wayland support is still meh. Plus KDE is based on Qt which uses C++ and they want to move away from that.

From what I know/assume/guess, they won't be going for a "full" GNOME replacement. They are fine with the GNOME apps, GTK as well (kind-of), the GNOME PIM integration etc. My bet is they will replace Mutter, the compositor/wm. And since Mutter is a hot mess of garbage anyway, this isn't too unreasonable. Plus, they got the talent and rumours are, they are hiring more talent every day.
6 Likes, Who?
1/6»
While you're here, please consider supporting GamingOnLinux on: