Something that still doesn't quite feel right somehow is seeing the likes of a PlayStation logo on Linux. Anyway, the smash hit God of War is now on Steam and works right away on Linux. You can thank Steam Play Proton for that.

It's hard to believe the changing face of gaming sometimes. Previously console exclusive games now coming to PC more often. A trend I hope to see continue for years to come. Of course the new release comes with the kinds of things you would expect like enhanced graphics, ultra-wide support, NVIDIA DLSS, AMD FSR and so on. 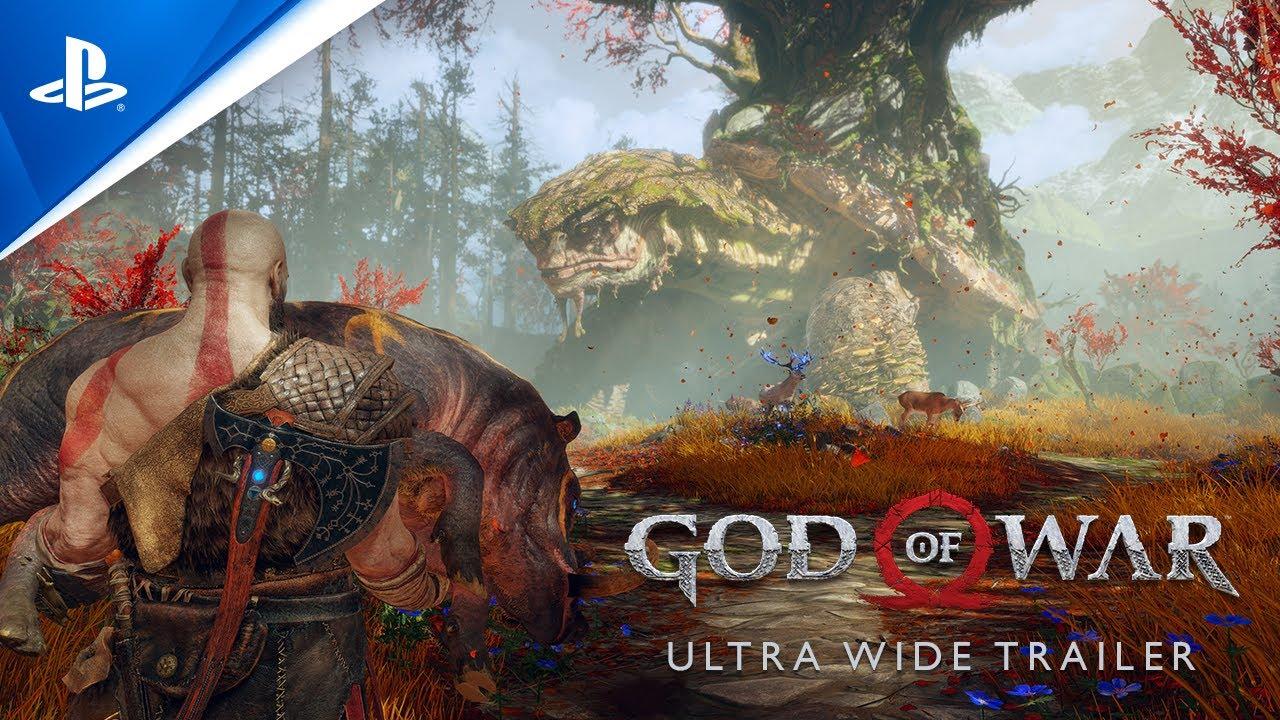 Enter the Norse realm
His vengeance against the Gods of Olympus years behind him, Kratos now lives as a man in the realm of Norse Gods and monsters. It is in this harsh, unforgiving world that he must fight to survive… and teach his son to do the same.

Grasp a second chance
Kratos is a father again. As mentor and protector to Atreus, a son determined to earn his respect, he is forced to deal with and control the rage that has long defined him while out in a very dangerous world with his son.

Journey to a dark, elemental world of fearsome creatures
From the marble and columns of ornate Olympus to the gritty forests, mountains and caves of pre-Viking Norse lore, this is a distinctly new realm with its own pantheon of creatures, monsters and gods.

Engage in visceral, physical combat
With an over the shoulder camera that brings the player closer to the action than ever before, fights in God of War™ mirror the pantheon of Norse creatures Kratos will face: grand, gritty and grueling. A new main weapon and new abilities retain the defining spirit of the God of War series while presenting a vision of conflict that forges new ground in the genre.

There's some really heavy stuttering though with an NVIDIA GPU. As always with more graphically intense games built for Windows and run through Proton, they need time to build up a shader cache. Once that is done, eventually Steam will have it to give out while the game downloads for your machine to sort it ahead of time. So, if you want a smooth experience, it usually pays to wait a week or so. That said, if you want to put up with the stuttering for a bit, don't let us stop you as outside of that, it seems to play quite brilliantly. 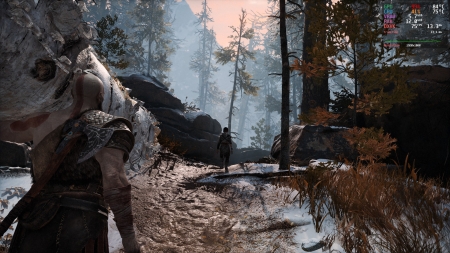 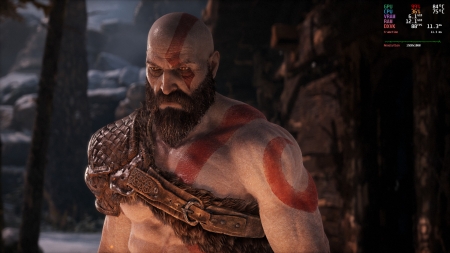 Like me, you might find that the lip-syncing voice audio is completely off though. It's possible you can fix that by adding this as a Steam launch option:

PULSE_LATENCY_MSEC=60 %command%
In my own testing, that made it match up much better but not always.

One possible way to improve day-1 performance in this and other single-player games is to use the community built  Proton-GE, which you can get easily with ProtonUp-Qt. Proton-GE has DXVK_ASYNC, which can help reduce stutter but is not recommended for multiplayer titles as it can trip up anti-cheat. In my own testing, it made God of War massively smoother. If you choose to try that out it's this launch option: DXVK_ASYNC=1 %command%

Since I'm not much of a console gamer, even though I do own multiple consoles, I completely missed this and had no idea that Christopher Judge was the voice actor for Kratos so if you'll excuse me I have some fanboying to do.

We do often include affiliate links to earn us some pennies. We are currently affiliated with GOG and Humble Store. See more here.
About the author - Liam Dawe
I am the owner of GamingOnLinux. After discovering Linux back in the days of Mandrake in 2003, I constantly came back to check on the progress of Linux until Ubuntu appeared on the scene and it helped me to really love it. You can reach me easily by emailing GamingOnLinux directly.
See more from me
Some you may have missed, popular articles from the last month:
52 comments
Page: «3/6»

Quoting: F.UltraThe sound issues in games are not really due to Pulse but down to WINE (hence why they also had to implement a PIPEWIRE_LATENCY env variable) or rather that it's still not clear exactly how the Windows sound system handles buffers, the wine wiki points to this bug https://bugs.winehq.org/show_bug.cgi?id=39814 as reference as "known bug in wine for sound issues" and reading it gives me the impression that games asks for a specific sized buffer but then tries to overwrite it before its consumed in full so there are bugs (in that they don't follow the written spec for the API) in lots of games that the Windows audio system somehow have workarounds for.

That may be true for wine in some cases. However, you should also note that pulseaudio had stuttering and delay issues even for applications that are not wine (for example, Kodi and VLC). I remember when pulseaudio first replaced alsa - there was problems in just about everything after.

In any case while pulseaudio worked for the most part and did improve in many areas - pipewire is far superior in many aspects.

For example, pulse would often struggle with some bluetooth codecs and may have sound issues with bluetooth, where as pipewire works perfectly with aptX codecs (no tweaking, out the box) and all other BT codecs so now my sennheiser momentum 3s can happily play along using the aptx codec without doing workarounds.

It also solves the jack latency issues and random issues where pulseaudio would get confused with too many sinks and you'd have to kill pulseaudio and restart it to make it work again etc.

In any case, you're better off with pipewire at this point.

I hated PA when it first came out, and I still hold a grudge to it now for all the trouble it caused me over the years

) although that issue seems to have been solved as I haven't noticed it lately.

Long story short, neither system is perfect. But pipewire is better.

View PC info
I was severely tempted to buy this yesterday (I have almost the full asking price in Steam Wallet via refunds) but... I have too many games still to play. Currently working my way through 2019

Will do the moment it goes on sale.
1 Likes, Who?

kaktuspalme 15 Jan
View PC info
Nice! I would buy it on Steam if I hadn't it for my Playstation 5 already. And sometimes I have to say, no tweaking at all and just enjoying is something nice, especially with this very nice game.
1 Likes, Who?

Quoting: WorMzyOh boy, another developer that can't be arsed to support Linux, but will still benefit financially from open source software picking up their slack. Whoopee.

Where did they ask you to buy the game? You're throwing your money into their pockets like you've got no choice. Clearly you don't care about a Linux port so why should the developers?

Quoting: chowderI agree! The Open source community gets abused all the time. I've worked for so many companies that relied heavily on open source software, and when I'd ask them to donate even $100.00 a year to the developers they would look at me like I'm crazy...

It's no abuse when someone uses code as granted by a license. You may personally think that it's objectionable, but it's simply their right.

Yes, that's abusing the open source community, since it's a clear license violation. But this is a different case because the developer never intended to comply with the license.
2 Likes, Who?

Quoting: ghiumaExcellent! one more game in the list, for stuttering better to have patience some corrections will come out soon, when I bought Cyberpunk 2077 it was unplayable, now I play it with high settings on Nvidia 1060 6gb without stuttering and without correction... (Proton GE and Experimental)

Really ? I was holding back to play Cyberpunk 2077 (and Horizon Zero Dawn, which I haven't buy yet) on my 1070, because of reports indicating very poor performances...

I may be able to give it a try then

View PC info
so getting between 80-135 fps ultra 1440p. proton experimental (5950x 6900xt).
there are frame drops at times but generally in changing cut scenes rather than in the action. definitely playable - looks great.
2 Likes, Who?

Quoting: rustigsmedso getting between 80-135 fps ultra 1440p. proton experimental (5950x 6900xt).
there are frame drops at times but generally in changing cut scenes rather than in the action. definitely playable - looks great.

I got strutters during cut scenes on PS5, too. Probably the game loads some stuff in the background.
0 Likes

Quoting: WorMzyOh boy, another developer that can't be arsed to support Linux, but will still benefit financially from open source software picking up their slack. Whoopee.

Where did they ask you to buy the game? You're throwing your money into their pockets like you've got no choice. Clearly you don't care about a Linux port so why should the developers?

Quoting: chowderI agree! The Open source community gets abused all the time. I've worked for so many companies that relied heavily on open source software, and when I'd ask them to donate even $100.00 a year to the developers they would look at me like I'm crazy...

It's no abuse when someone uses code as granted by a license. You may personally think that it's objectionable, but it's simply their right.

Yes, that's abusing the open source community, since it's a clear license violation. But this is a different case because the developer never intended to comply with the license.

I agree it's their right. I just find it disgusting that they make millions off other peoples hard work, and kick and scream to give credit or even a single $1 or hour back. Giving credit to a open source project is huge one for bringing more users and contributors to the project, but also can help the developers with their resume. I've recently started writing software myself and it's hard work. Spent over 20+ hours on the open source software I'm writing at this point not to mention the money I've spent on hardware for testing. When I release it I hope the community finds it useful and adds to it to make it more useful which in turn will teach me new things. I appreciate all the hard work that everyone in this community puts in, and I just want it to get the recognition it deserves.
0 Likes

Liam Dawe 15 Jan
View PC info
Article updated to note Proton-GE and DXVK_ASYNC, which does improve performance a lot.
4 Likes, Who?
« 1«3/6»
While you're here, please consider supporting GamingOnLinux on: