ProtonUp-Qt is the fantastic and simple way to download and upgrade the Linux compatibility tools Proton-GE, Luxtorpeda, Boxtron or Roberta for Steam and works with both Lutris and Heroic Games Launcher too.

This allows you to easy get these external tools, and have them added to Steam directly so you can pick them as you preferred compatibility option for running games. Proton-GE can sometimes run games that the official Proton can not, Luxtorpeda gives you access to lots of native Linux game engines (like OpenMW for Morrowind), Boxtron for native DOSBox and Roberta for ScummVM. Add to that the ability to easily add newer Wine to Lutris and Heroic and Linux gaming looks easier than ever.

Using it is so ridiculously simple, I love it. Download it, run it, click a few buttons - done. It really doesn't get better than this. 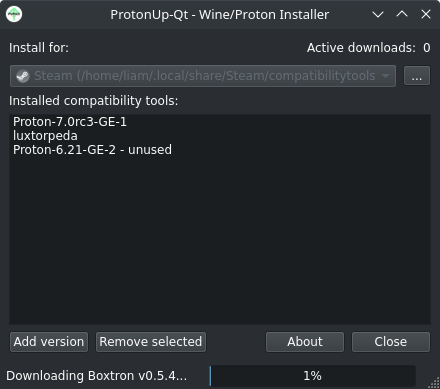 Available as a Flatpak on Flathub or an AppImage.

View PC info
Love this application, love the simplicity of it. Point, click, done, fantastic. My go to recommendation for anyone for how to install Proton GE.

By the way the developer behind this tool, DavidoTek, has a Kofi page, if you got some spare change to buy them a coffee. ;)

View PC info
Lutris itself is still just on flathub beta, where it has been for a while. Anyone know if it's being maintained at all?

EDIT: never mind, I just installed it and it is current

View PC info
Awesome! Super useful. I also love that it is available both as `AppImage` and via flatpak.

View PC info
Maybe I've just been incredibly lucky, but I've not had a game not working properly with the official version of proton/steam play.
And the few cases it didn't work, neither does it on GE (according to protondb).

It was different a couple of years ago though. That leads me to wonder if not in fact GE has kind of outplayed its role?
2 Likes, Who?

Quoting: BeamboomMaybe I've just been incredibly lucky, but I've not had a game not working properly with the official version of proton/steam play.
And the few cases it didn't work, neither does it on GE (according to protondb).

It was different a couple of years ago though. That leads me to wonder if not in fact GE has kind of outplayed its role?

The Media Foundation thing should happen on many games, no? Recently bought Paw Patrol - On a Roll and it was missing video clips with any proton I tried. Even worse, it did not run at all with the latest versions!?! I had to use an older version plus do the media Foundation trick. (Did not try GE.)
0 Likes

View PC info
how can i change the interface language?
0 Likes
While you're here, please consider supporting GamingOnLinux on: