Continued from Part 10: For I Have Sinned

Almost from the very start Raven Software and id Software had a symbiotic relationship. Raven would use id tech to power their games for years, but one of their deepest collaborations was on Heretic, with then id Software designer John Romero even acting as producer. Given the Linux friendly atmosphere at id, it is no surprise that some of that would start to rub off on Raven, culminating in Loki Software negotiating to make a port of Heretic II.

Rights conflicts between id Software and publisher Activision keep Heretic II from being sold digitally, although Microsoft's recent acquisitions mean they will soon own them both. Regardless, I was quite pleased when I found a raggity Windows jewel case of the game selling for $5 CAD at a local second hand store. Not long after a lot of four Loki Software games was put up for sale on eBay, including the Linux release. Suddenly I had both versions of this rare game to play.

Unlike with the other titles I have covered this would be my first time with Heretic II, my past exposure limited to just tooling around the shareware levels of the previous Heretic and HeXen games. Despite picking up the story of Corvus from where it left off at the end of Heretic, the game stands alone outside of passing references and a few returning mechanics, more of a spin off from the Serpent Riders Trilogy than a continuation.

The greatest departure is the adoption of a third-person perspective, playing more like the later Loki Software game port Rune than prior entries in the series in terms of controls. Heretic II is also a lot more plot driven, and while it does feature hubs like HeXen and HeXen II did, they are a lot less complicated and require minimal backtracking. The result is a much more straightforward and accessible action romp less concerned with puzzle solving.

I have to be honest though, Loki botched this one. The installer on the disc is broken, meaning you need to download the heretic2-install-x86.run setup script instead. This is not a huge ordeal, assuming you are aware of the issue, but things went further downhill when I used the Loki Update tool to patch the game from 1.06b to the final 1.06c release. This introduced a number of sporadic but persistent segmentation faults throughout the game. Reverting solved the issue. 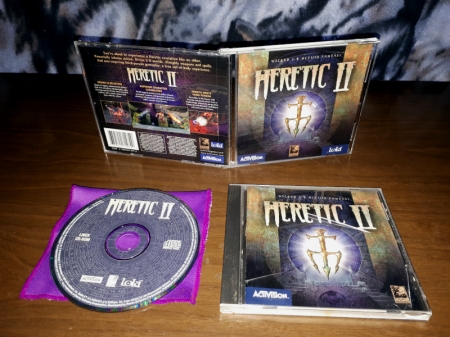 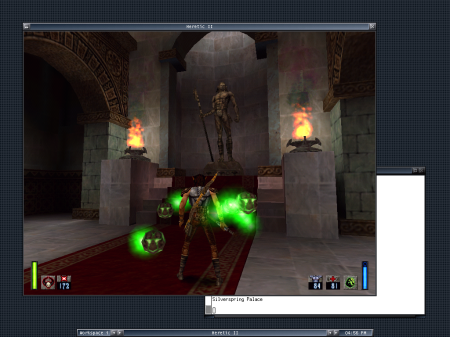 The performance was also uneven. Turning off dynamic lighting using the "gl_dynamic" and "cl_lights" console variables did much to help keep the frame rate consistent, but at the cost of making it harder to navigate the darker levels, as Light of the Seraph Shrines no longer glowed. Without this change I found myself avoiding weapons such as the Hellstaff due to the accompanying slow down, so the game was still more playable, even at the expense of navigation.

Upon entering the Cloud Living Quarters close to the end I also hit a curious bug where any savegame I made would be corrupted. Thankfully the autosaves between levels were immune and I could still quicksave, allowing me to confront the final boss and complete the game, which did not seem a given at times. Menus and the opening and closing cinematics were also sluggish with OpenGL enabled, and would even draw on top of the loading screen on occasion.

I decided I would try playing Heretic II at Armageddon difficulty from Windows 98 to compare, and from there I could run the game at the same resolution with all the graphics options maxed without a hitch. For those curious, I did manage to reach Silverspring Palace, but was running out of ammunition. I used an elevator to cheese most of the enemies, often gibbing them in the door, but still lacked the resources needed to defeat the Celestial Watcher.

The Linux version does hold one advantage by offering the Enhancement Pack out of the box, a glorified patch which was released as a free update to Windows users around the same time as the Linux port, featuring a number of game tweaks and multiplayer enrichments. Heretic II may start off slow, showcasing unimaginative warehouses early on as well as an obnoxious swamp, but overall it is a fun ride that is well worth revisiting if you can find a copy.

The business relationship formed between Loki and Raven would result in one more Linux release before the final closure of the porting house, a title which was under development in parallel with Heretic II with a prestigious licence but would not be released for another year and a half. This game would later prove so controversial that it was effectively banned in the next province over from where I live. Not that it stopped anyone from playing it.

Carrying on in Part 12: In Tremendous Pain

Hamish Paul Wilson is a free software developer, game critic, amateur writer, and farm labourer living in rural Alberta, Canada. He is an advocate of both DRM free Linux gaming and the free software movement alongside his other causes, and more information on him can be found at his icculus.org homepage where he lists everything he is currently involved in: http://icculus.org/~hamish
See more from me
Some you may have missed, popular articles from the last month:
22 comments
Page: 1/3»

A review of the game by Matt Matthews for Linux Games is archived here:
https://web.archive.org/web/20020227231244/http://www.linuxgames.com/reviews/heretic2/

And my launch command for Heretic II is as follows:
heretic2 +set gl_dynamic 0 +set cl_lights 0

View PC info
Thanks for doing these, Hamish, I enjoy them immensely! Reminds me of running SuSE Professional on my Celeron 533 back in the day.
0 Likes

View PC info
There is a great Lutris installer for native Heretic 2;

View PC info
Last time I tried to install Heretic II on my modern Arch Linux system it worked fine in Software but would crash with OpenGL enabled. Not sure if Lutris includes a fix for that or not.

For these articles though I am always going to try to use the original installers first to be as period accurate as possible. Hence why I tracked down all the Serious Sam betas off icculus.org rather than using the LIFLG installer.
1 Likes, Who?

View PC info
Fun fact, Heretic II also got a commercial port on the Amiga. https://www.hyperion-entertainment.com/index.php/games/heretic-ii It even supports 3D acceleration through Warp3D if you happen to have a Voodoo Card.

I should play it again one of these days (likely not on the Amiga, as mine with the Voodoo is rather temperamental.
1 Likes, Who?

Yep, for Hyperion Entertainment making Linux and Mac ports was always a side hustle, with the Amiga being their one true love.
2 Likes, Who?

Yep, for Hyperion Entertainment making Linux and Mac ports was always a side hustle, with the Amiga being their one true love.

Ha, for me the topic of building a Retro Linux computer would be to put together an old PPC mac and install Debian :P
Or you know, maybe try to put 68k Debian on my Amiga :)
0 Likes

Quoting: slaapliedjeHa, for me the topic of building a Retro Linux computer would be to put together an old PPC mac and install Debian :P

Well, my graphics card at least is about right for an old Mac.

Yep, for Hyperion Entertainment making Linux and Mac ports was always a side hustle, with the Amiga being their one true love.

Ha, for me the topic of building a Retro Linux computer would be to put together an old PPC mac and install Debian :P
Or you know, maybe try to put 68k Debian on my Amiga :)

That's exactly what I did back in 2005. Bought a cheap Mac mini and installed Debian on it, to show off the rare commercial ports to Linux/ppc from Loki and LGP at the Holarse booth at the LinuxTag fair.
2 Likes, Who?
1/3»
While you're here, please consider supporting GamingOnLinux on: