One of the selling points of Unreal Tournament pitched to the modding scene by Epic Games was its ability to load assets from the original Unreal into the new engine, further expanding the content base for what was already a highly modifiable game. After a few years this snowballed into a concerted community effort to make the entire Unreal single player mode playable from within its own sequel, bringing it over to Linux in the process.

Installation is simple thanks to the unrealgold-install-436.run installer still hosted on icculus.org extracting the files off the disc and setting up the game as if it were a retail title. Installers are also available for owners of the original Unreal as well as for the Return to Na Pali mission pack, but Unreal Gold is the version that I have on CD-ROM. In fact, the longstanding but now defunct online retailer Tux Games even sold copies of Unreal bundled with the installer.

Again I made some modifications to the Unreal.ini file, switching to the SDLGLDRV renderer with "UseGammaExtension" set to "1" as well as making "Coronas" and "VolumetricLighting" set to "False". I decided to keep dynamic lighting enabled this time as Unreal places a far greater emphasis on darkness for both atmosphere and navigation. Set pieces such as the first Skaarj encounter are undermined by the lights not going out, making it an unacceptable compromise.

It helps that Unreal is not as heavy as Unreal Tournament, being smoother to play even with the frame rate dropping into the low teens when things get intense. To combat this I cranked the resolution all the way down to 512x384 which the engine displayed in the centre of the screen with black borders. This does much to cushion the load brought on by running games at 32 bit colour depth, as was borne out by experimenting with Quake and Quake II as well.

I also changed from the default HUD to prevent notifications appearing over the armour value, with my player character holding her weapon left handed to further embrace not being your typical action game protagonist. Unreal remains notable for defaulting to a heroine, although this can be changed in the options menu. The sex of the narration in Return to Na Pali will also respond to this, with the voice actress putting in the better performance of the two. 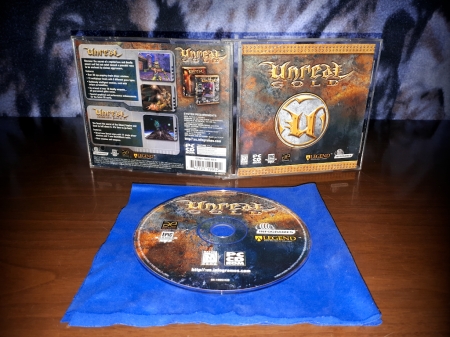 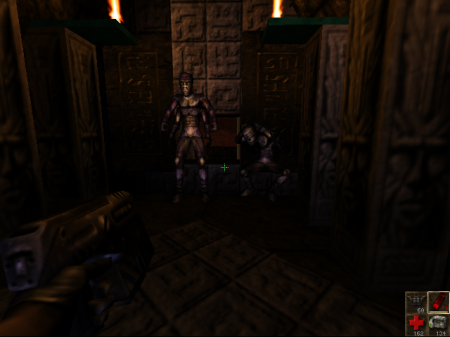 As far as classic first person shooters go though Unreal is not my favourite, with a good deal of the weapons not gelling with me and a lot of the level designs feeling obtuse. I did find myself enjoying the game more this time than when I first played it a few years ago, as I had more of an inkling of where to go when I got stuck, and the combat seemed less twitchy with the game averaging around 30 frames per second. That said, Na Pali Haven and Nali Castle are clear standouts.

Because the game is running on top of Unreal Tournament, this brings with it a few interesting quirks. The most amusing is the ability to switch cameras to those of the other creatures on the map by pressing F5, as would be used for spectating during tournament matches. It will also list the full details of each map including the author and game type on start up. As these are not used by default you have to bind the "QuickSave" and "QuickLoad" keys in the User.ini file as well.

There is a graphical glitch affecting both the Translator and Nali Fruit Seed icons in your inventory, but this proves not to be a huge deal since they will be buried by other items most of the time, and you can press F2 to invoke the Translator instead. I also encountered a few minor clipping errors and hall of mirror effects while playing, but I am unsure if those were due to how the port was accomplished. All in all an impressive result given how it was done.

Unfortunately the mission pack carried over less well. A known issue listed in the README is that all of the added weapon and ship models have transparent rendering errors, something which is less visible if you centre your weapon hand apart from the new rocket launcher. It also played way choppier starting with Glathriel Village up until l left the UMS Prometheus, at which point it smoothed out for what proved to be my favourite stretch of the entire game.

All of which is okay, as thanks to the OldUnreal project Unreal Gold still plays just fine on modern Linux releases, with all of the above issues patched out along with multiplayer support. For the next part I intend to test out another 3D engine, but this one is special due to it being an original creation of the free and open source gaming community. It also happens to be packed with yet another diverting if at times frustrating first person shooter.

Carrying on in Part 15: Square Cubed

View PC info
Yeap, I played entire Unreal and Return to Na Pali as an UT99 mod on Linux natively back in 2011. I even had a sound delay related with Alsa or OSS that I fixed near the end of the first game. Fun times..
0 Likes

Quoting: GuestI never managed to play Return to Na Pali until I picked it up on GOG. Never could find expansion in stores, and by the time "alternative methods" were available I'd basically moved on to other games. Maybe I should get those games and play them through.

If you do decide to play through Unreal Gold with the GOG.com version then I would highly recommend doing it through Lutris. Most of the time I avoid game managers as I prefer getting my own hands dirty, but in the case of the OldUnreal patch Lutris really is the most painless way of setting it up.

Quoting: GuestIt's mostly a way for me to get to the data files using innoextract. Not sure I have the cds with me anymore.

Lutris just lets you point to the GOG.com installer itself and extracts it all for you, which is handy as OldUnreal themselves were limited in how they could package the Linux version:


Quoting: OldUnreal FAQ227 version is having a complete native port. Wine is not needed to run it. But since there is no Linux installer yet with permission from EPIC, Wine is needed to install the base game and the patch itself. After installing it Wine is no longer needed and the game can be run with UnrealLinux.bin

View PC info
Hey Hamish. I've been thoroughly enjoying this series of articles and just wanted to say thankyou for publishing them; I didn't switch to Linux until 2008, but was watching from the sidelines during much of the time-period that these pieces cover (and using Mac OS from 2004 whilst waiting for Linux WiFi support to mature, since I lean towards portable machines), so it's both a nostalgic read and a fascinating look at how things were from the other side that I desperately wanted to be on at the time!

Many thanks again for this eye-opening series - I'm looking forward to the next installment already.

Quoting: PenglingI didn't switch to Linux until 2008, but was watching from the sidelines during much of the time-period that these pieces cover ... so it's both a nostalgic read and a fascinating look at how things were from the other side that I desperately wanted to be on at the time!

Honestly my own experience was not that different, as I was not able to switch to using Linux full time until 2007 due to school related commitments. But I still grew up reading and messing about with Linux in various forms so these articles are kind of exploration of all that I learned for me was well.
2 Likes, Who?
While you're here, please consider supporting GamingOnLinux on: