Valve has now put live some public changelogs and will be properly announcing when updates go out for the Steam Deck. You can follow along on their news hub, but we'll cover them all as usual.

An update has rolled out today, here's what's new and changed:

This is nice to have, just like they do for the Steam client and everything else.

You can follow along for more using our Steam Deck Tag (has a dedicated RSS feed), our Steam Deck Forum Category and the Steam Deck Channel in Discord. Be sure to also follow us on Twitch as we will continue to do dedicated on-Deck livestreams.

View PC info
Oof, not launching with patch notes. Well hey they've got them now so I'll give them that.
0 Likes

View PC info
Any news about the release of SteamOS to the general public?
0 Likes

Quoting: BielFPsAny news about the release of SteamOS to the general public?

once you boot it up the default installer looks for an NVME drive.

edit: I also made a vdi image by doing this:

View PC info
You can install it, but you need to edit the /home/deck/tools/repair_device.sh according to your "sacrificial" drive. Don't just run the scripts on your main PC, it may just delete the data if you're not careful.
And do fbcon=rotate:0 in grub to avoid the console rotation.
3 Likes, Who?

Quoting: thelimeydragonYou can download the restore image from here:

Wait, Can you live boot with that image?
0 Likes

Quoting: thelimeydragonYou can download the restore image from here:

Wait, Can you live boot with that image?

You can do some simple things but it's more for recovery/installation than actual practical use.

View PC info
Got it to work, as in actual installation on my drive: 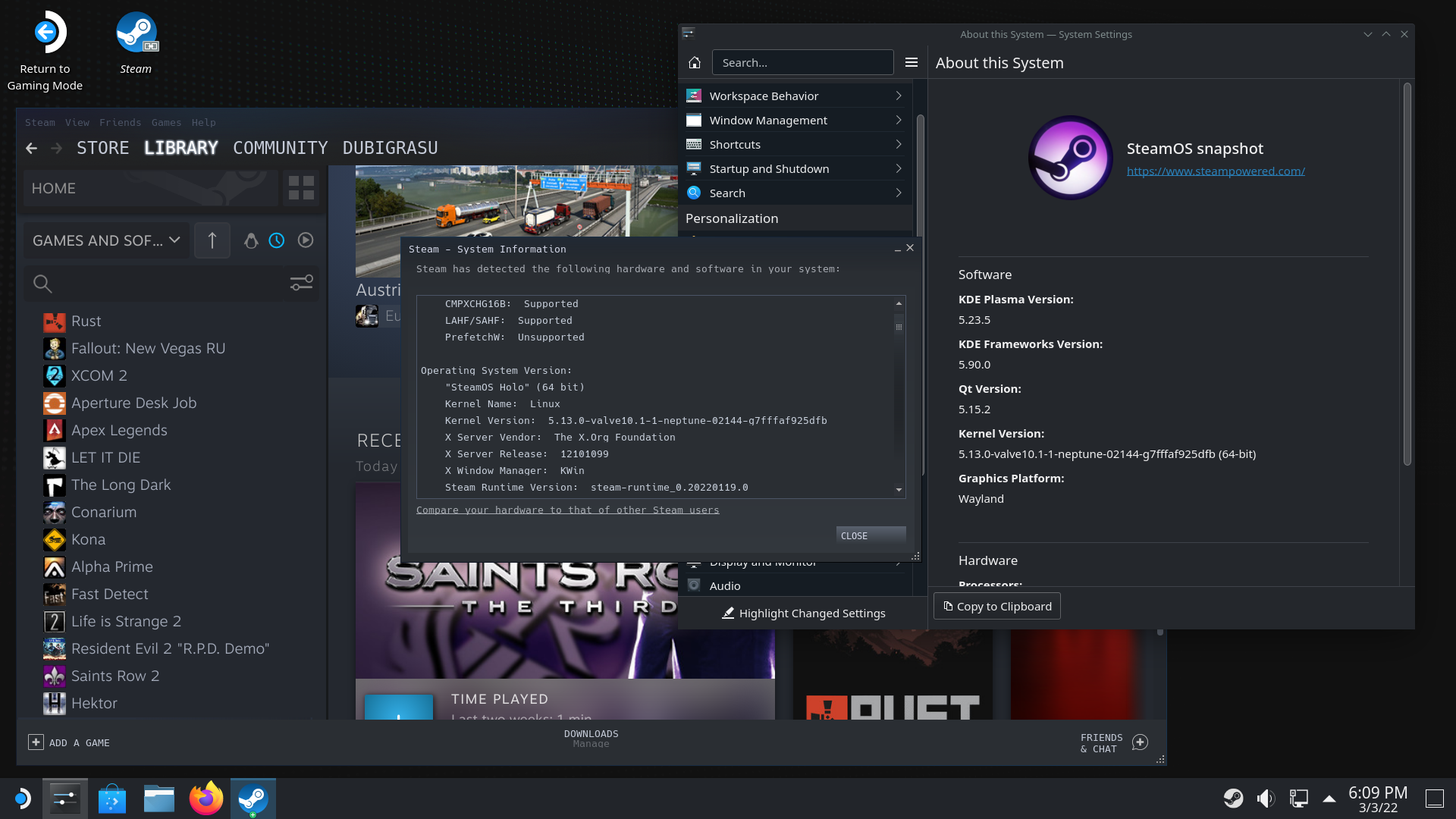 Gotta say that is great for the deck, right, but if you look for this to install on your PC (at least for now and this specific image) is not much to write home about. You can get the same experience or better with the usual distros.

It really is tailored for the deck, and that's it. I'm really curious how the actual (future) desktop release of SteamOS 3 will be.
6 Likes, Who?

thelimeydragon 4 Mar
View PC info
Does make me interested in what the bootleggers will do.. make cheap systems but with the actual SteamOS installed?
0 Likes

Quoting: thelimeydragonDoes make me interested in what the bootleggers will do.. make cheap systems but with the actual SteamOS installed?

First of all: the steam deck is the cheapest system.
Second of all: that was the idea of Valve all along. They want others to adopt Steam OS.
But the hardware manufacturers are severely lagging and lacking in any initiative.
Valve does this so there can be a new market with a good baseline (not the aya neo "crap", but a lot higher with respect to controllers) in hardware and a good base software.
Nobody wants to innovate in a microsoft world.
That's why valve chooses Linux. But they really have to carry the whole thing before 3rd parties will just copy paste.
Steam os was for it's time already a significant step ahead. There was no such thing as a PC gaming console until steamos.
Due to lack of manufacturer backing valve had to take the next step. Sell hardware too.
0 Likes
While you're here, please consider supporting GamingOnLinux on: