Cataclysm: Dark Days Ahead is a sprawling FOSS apocalypse roguelike

Cataclysm: Dark Days Ahead, CDDA for short, is a free and open source apocalypse-themed roguelike that is incredibly deep and a ton of fun to play. If you haven't heard of it, think of a turn-based Project Zomboid, but in addition to zombies, CDDA features alien fungi, eldritch horrors, giant skeletons, and dozens of other monsters eager to add you to the billions of victims of the apocalypse.

The core gameplay loop will be familiar to fans of Zomboid: you start with little equipment or knowledge, but as you gain experience and find or craft equipment and build a base an you can eke out a life on the fringes of the apocalypse. While the base game is ASCII, releases also includes several tilesets - I am using one of the included tilesets, Ultica. 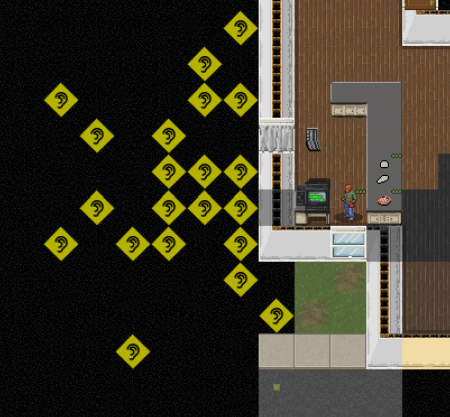 Here I am a few moments after one of my first forays into the world of CDDA. I have spawned inside a FEMA evacuation shelter, and while checking the lockers for supplies I hear some terrible noises outside a window, indicated by the yellow icons. Stupidly, I draw back the curtains to take a look, and an undead horde smashes the windows and spills into the shelter, quickly chasing me down and ending my pitifully short life. Welcome to the apocalypse. 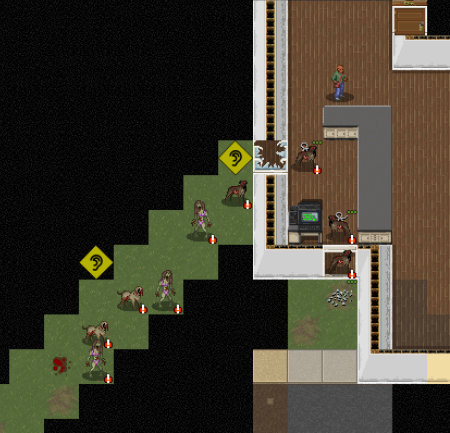 While the game is unforgiving, after a few tries (and some better luck with your spawn) you can become an absolute zombie terminator. On my current save I have fared considerably better. I march through the streets clad in heavy SWAT Kevlar and a Guy Fawkes mask, swinging my fire axe to cleave through hordes of zombies while occasionally popping batteries into  my mp3 player (the music helps me stay calm). Exploring an eerily quiet town a week after the apocalypse I came across a swimming pool filled with webbed zombies that had evolved to live in the water along with a terrifying half-crocodile half-zombie. After spotting me through the glass walls of the pool, the horde smashed the glass and rushed across the street to show me their bathing suits. It took me two days to drag all the corpses into a pit and burn them, and I now have a delightful collection of swimwear. 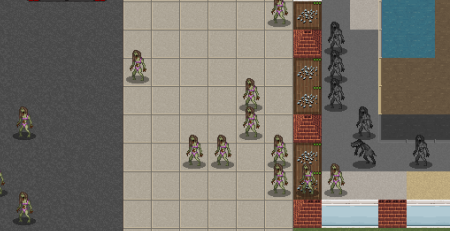 The best example of the complexity of CDDA is its crafting system. There are hundreds of recipes, and navigating them all and understanding how to craft them is made simple through a powerful crafting interface. You can search through the recipes you know with a search engine that accepts wild cards and allows searching based on ingredients, proficiency required to craft, the characteristics of the crafted item, and more. I have never seen such a powerful or enjoyable crafting system, and it may be the single greatest feat of the game. I know this looks complicated (and it is) but if you spend a bit of time with it you'll recognize how well designed it is: 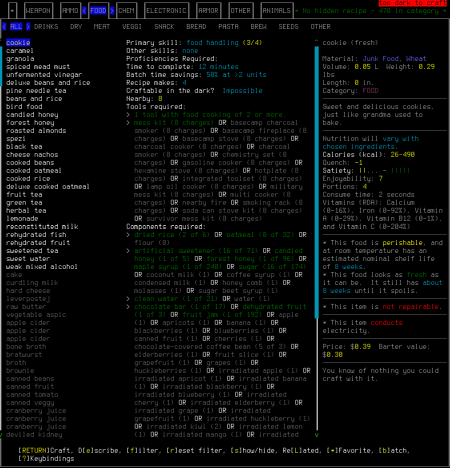 In addition to the more immediate physical threats of the apocalypse, your survivor is faced with battling starvation, dehydration, extreme temperatures, exhaustion, illness, addiction, and even depression. You can break your leg falling off a roof, go deaf from firing a rifle indoors, and be blinded by goo.

As time passes, the environment around you changes. Monsters evolve into more terrifying monsters. Like Project Zomboid, this is not a game with a happy ending for your character. Two weeks into the apocalypse, having chopped up most of the undead population of a small town, I was faced with a new problem: giant bugs, presumably attracted by the rotting corpses I had left in the street. Investigating a basement in one house with a flashlight I am met with a horrifying sight (and stench): a giant nest of cockroaches, mutated giant bugs, and their droppings covering the floor. You can see me on the staircase to the right. 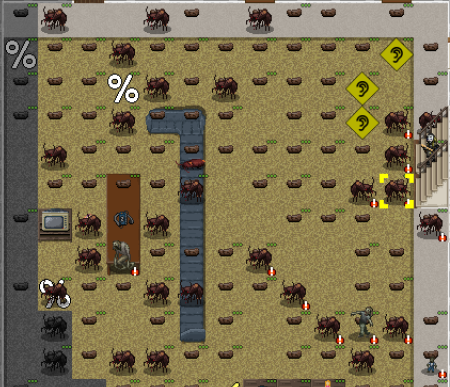 I dash back up the stairs but am pursued by the larger bugs, one of which slashes open my leg. A pitched battle ensues, and I limp home with the resolution to leave the basement bugs in peace.

CDDA also features a bizarre cast of NPCs that try to survive the apocalypse along with you. One man I met was convinced that government corruption had something to do with the apocalypse, and implored me to find files in a nearby Federal building that would prove him right. I politely told him I would look into it. Another man asked me to find an American flag for him; his concern, presumably, was that the apocalypse had led to flagging (sorry) patriotism. One woman I met was convinced that the Cataclysm was connected with the songs she could hear emanating from animal bones. Some of these NPCs can be convinced to join you, after which they can guard you, be set to work at your base, teach you skills or perform first aid on you, and countless other options. Not all NPCs are so helpful, though, and the potential for violence is never far from your interactions with strangers.

There are also vehicles that you can build, find, hotwire, modify, and operate. And by 'vehicles' I mean everything from a canoe to a helicopter. There are giant swords and medieval armours. There are wild beagles. There are nuclear weapons. Despite having 40 or so hours in the game, I feel that I know next to nothing about it or what is possible. And that's a great feeling.

You can download CDDA here, and check out the discord here - the community is great about helping new players find their feet.

We do often include affiliate links to earn us some pennies. We are currently affiliated with GOG and Humble Store. See more here.
About the author - anewson

I'm a long-time Linux user and a long-time gamer, and have enjoyed combining these two hobbies over the past 10 years or so. When I'm not gaming or working, you can find me annoying my cat, watching movies, or raving about my 40% keyboards to anyone I can corner.
See more from me
Some you may have missed, popular articles from the last month:
15 comments
Page: 1/2»

View PC info
Ooh, I had a lot of fun with this one sometime back. I got introduced to it by @inurashii on Twitter. It is available on Android, and they made some mobile-friendly interface changes for it to work there.

Quoting: GBGamesSpawning randomly in a French maid's outfit was not the best way to start the game, but it is definitely a memorable one.

That's one hell of a hangover.
4 Likes, Who?

drjoms 22 Apr
View PC info
Gotta say, this game is AWFUL so far.
Downloaded, compiled.
No basic way to enable any graphics.
Without it looks like ass. I am sorry, it's 2022. I loved Dungeons of dredmore, look it up. Great rogulike.
Git page has good chunks of links not working.
Stay away if you value your sanity.
0 Likes

denyasis 22 Apr
View PC info
Great game. Great write up too. It's fiendishly hard for a game, yet the stories and successes that come out of it are too good to make one not want to try again!
3 Likes, Who?

Quoting: drjomsGotta say, this game is AWFUL so far.
Downloaded, compiled.
No basic way to enable any graphics.
Without it looks like ass. I am sorry, it's 2022. I loved Dungeons of dredmore, look it up. Great rogulike.
Git page has good chunks of links not working.
Stay away if you value your sanity.

sorry you had a bad time with the setup :( I should have mentioned that I use the stable release you can download here (0.F) and didn't compile it myself. The release had the graphics already enabled. If you ever want to give it another shot, stop by the discord they're really helpful there.

View PC info
I only played the Ascii version years ago. It has a tile version? I'm back in!
4 Likes, Who?

View PC info
This is the game that inspired project zomboid and they simplified their game because they thought cdda was to complicated if that tells you anything 😅
2 Likes, Who?

It’s i think the best, completiest, deepiest zombie AND survival AND crafting game.
The only part i dislike is the "roguelike" aspect.
As a game can take hours and days to play, i find it "stupid" to lose it all on a mistake.
I never like permadeath in any game (but the ones death is part of a loop, you have to die to progress).
I always prefer to select my doom, reload or not my save, accept or not my mistakes.
Not being forced to start over.

Still, i played so many hours of CDDA and i’m still a noob, discovering new things or new ways to approach the world, every time.
3 Likes, Who?

One of my favorite games! I think it is the best crafting game I know.

Quoting: Tcheyi find it "stupid" to lose it all on a mistake.

you can die on RNG, true... but you can go to pickup your lost gear from your cadaver and return to your base (or better other way around) with new char, so it is somehow semi roguelike from my point of view

You can set options at world gen to play survival game only with natural animals Or to set it on Eldritch cyberpunk madness...
1 Likes, Who?

View PC info
I remember playing this game a few years ago, I was overwhelmed by both the enemies and complexity.
Might give it a try again in the near future.
2 Likes, Who?
1/2»
While you're here, please consider supporting GamingOnLinux on: