Terraformers, a relaxed game about turning the Red Planet green, out now

Released into early access on April 21 (on Steam and GOG), Terraformers is a game about growing and developing a network of cities on Mars, with the eventual goal of (what else) terraforming it.

Gameplay takes place over a number of turns (each representing one Martian year), and involves both the surface of Mars and a zoomed-in look at the individual cities you place, which have spots to place up to fifteen buildings. Areas on the planet are represented by a web of connected nodes, which you explore throughout the game. This allows you to find resources, either one-time boosts, or sources that can be mined to provide a continuous production. Each turn, you get to pick from a number of projects which you can spend your acquired resources on. These projects can be buildings, which can be built either in cities or on the Martian surface depending on the building, or space projects which require trade routes to provide the necessary resources but can provide some powerful rewards in turn. Trade routes can also be used to trade with Earth, allowing you to export some resource you might have too much of at the moment for something you critically need. 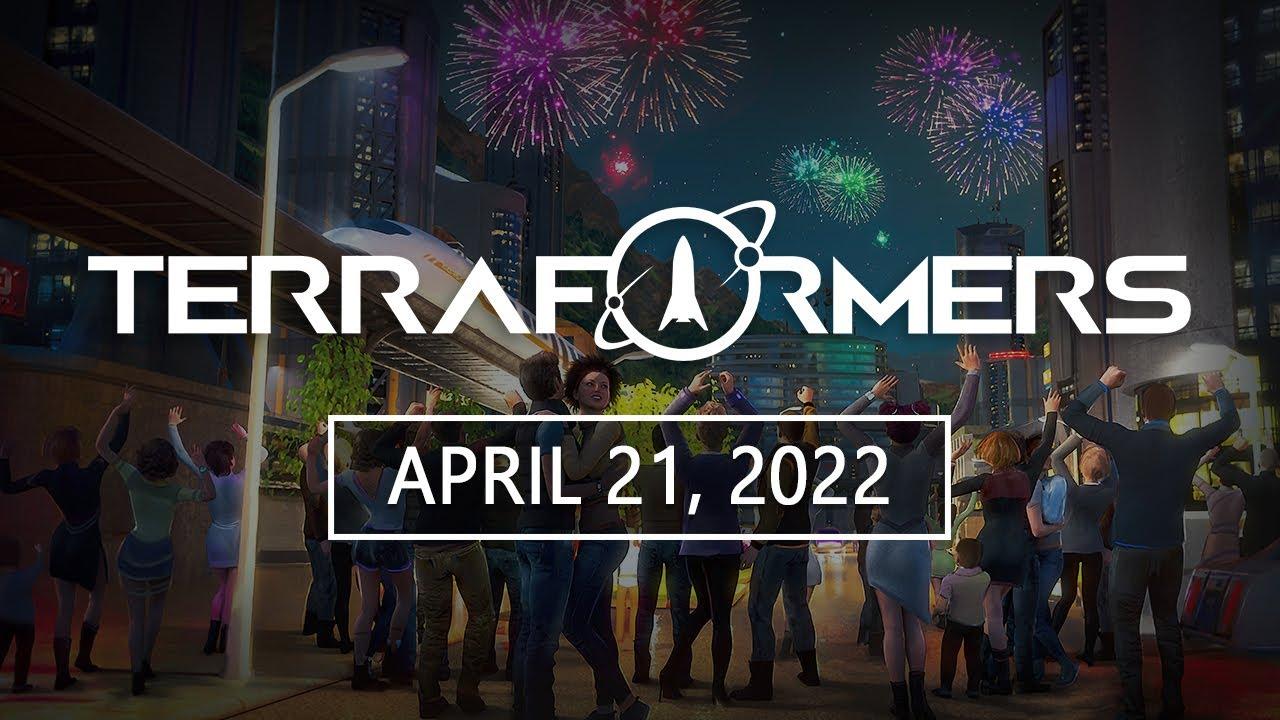 Every ten turns, you get to choose a new leader, which will provide some unique bonus actions you can use. Every leader can explore a region on the planet, but they can also do things like clear rocks blocking building sites in cities for free, give you free buildings, provide resources like power or food, and other things which can be quite helpful. Each leader also comes with a “specialization,” a bonus which continues in effect even after that leader has retired (so that you accrue more of them as the game goes on); this might be things like decreasing the cost of building mines, or giving you a bonus production of +1 titanium for every two titanium production you set up. Leaders come from a wide pool of cultures around the globe, which I thought was a nice touch and provides a bit of visual character. (Some leaders you can encounter later in the game are even said to be the descendants of earlier leaders you might have chosen, providing a reminder of the time scale over which the game takes place.) 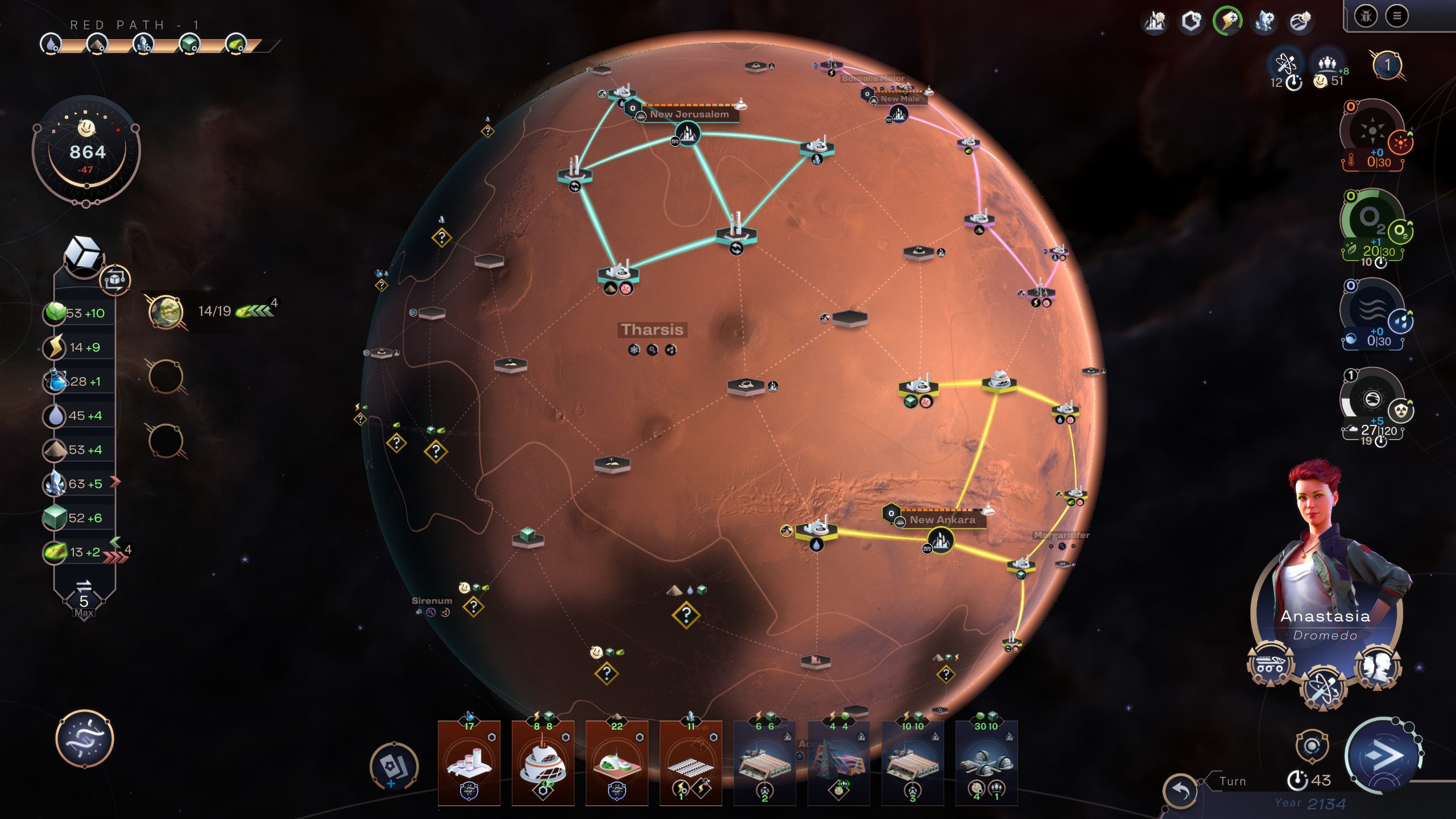 Here you can see the planet's surface, with three cities and their networks of controlled regions.

Along the way, you need to keep the “support” of your Martian populace up, or face public sentiment turning against you and losing the game if it reaches zero. Certain buildings provide bonuses to support, and exploring new and exciting places often gives one-time boosts, but over time the population starts to have higher expectations, represented by increasingly larger drops in support happening periodically over time. A typical game for me starts off with support being positive and banking a large store of it, then a long mid-section where it’s negative and I need to keep it up by exploration and having enough stored, then finally an end-game where it becomes positive again as terraforming starts to take hold and conditions outside the cities become more tolerable. (I’ve never personally lost a game to losing support, but I've heard of it and could see it happening if you don’t prioritize it enough!)

As you develop your colony, you'll start getting projects to terraform the planet. There are four parameters: atmosphere, heat, oxygen, and oceans, and different buildings provide various bonuses. You can breach aquifers to provide a one-time boost to ocean progress (instead of using them to supply water over time), and there are space projects that can provide large boosts to various parameters as well. Eventually, you'll be able to start introducing life; Mars's surface is broken into a number of “climate zones,“ with each zone able to hold one type of bacteria, plant, and animal. These have different requirements (penguins can obviously handle colder temperatures than elephants!), and provide different bonuses: Methanogenium bacteria increase temperature, for instance, Tundra Forests provide oxygen and atmosphere, and animals can keep your people happy and supportive. I'm still learning how the system works, but it's nice to watch the surface of Mars slowly turn green as oceans spread across the dry and dusty plains. 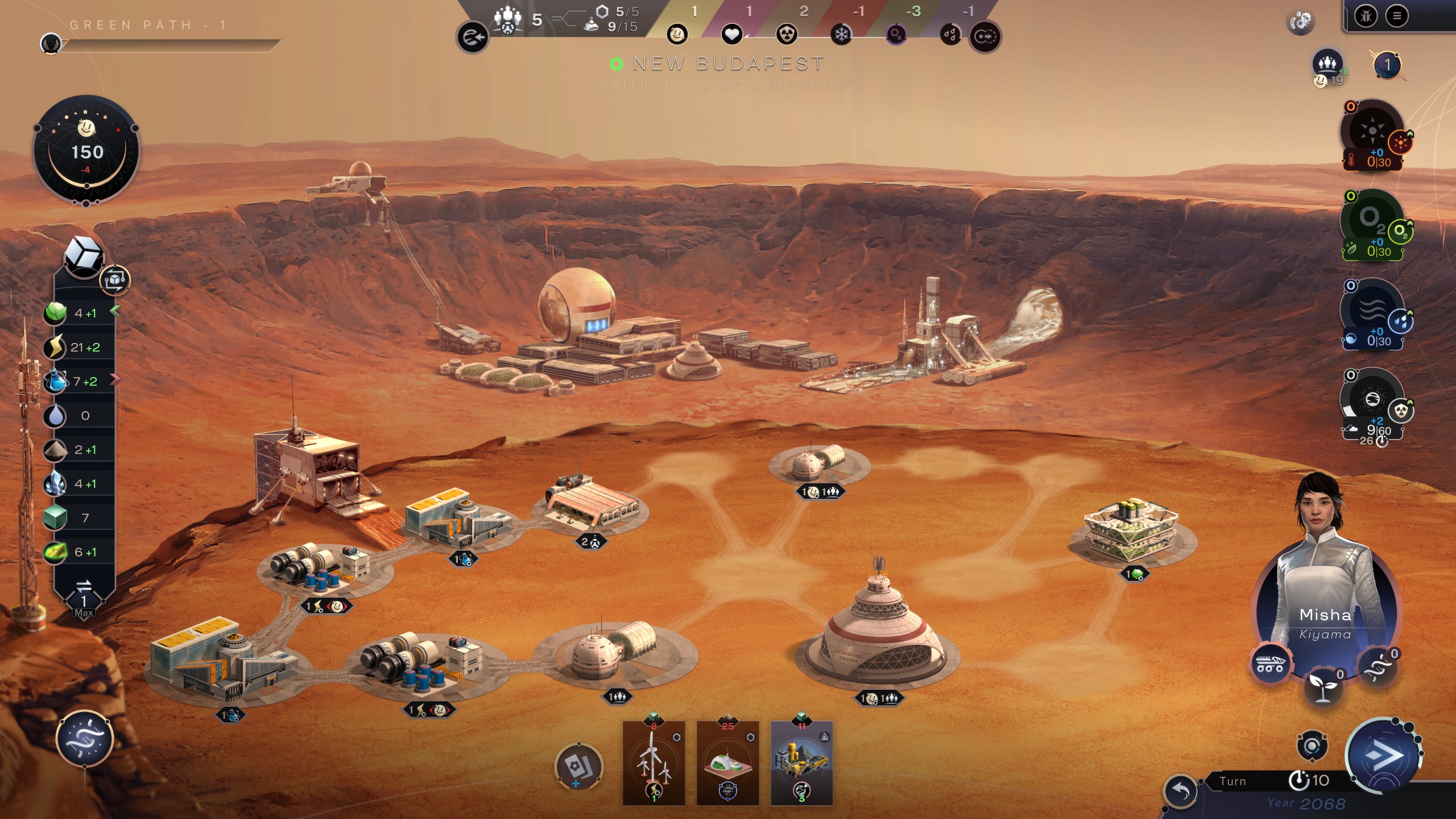 This is the city interface screen, where you can place buildings. Quite a few have adjacency bonuses, making efficient cities an interesting puzzle.

If all this sounds interesting, you can actually play a free, standalone prologue on Steam called Terraformers: First Steps on Mars which was released last October (see this previous article). It’s not the same as the full game, as the developers have iterated on it since then and changed several features (for the better), but it gives a good indication of what the game is like. The prologue is limited to 30 turns, but in the full game you have no turn limit and the challenge is simply in being more efficient and completing the goals of the various scenarios in as few turns as possible. Speaking of which, there are a number of scenarios at the moment with goals like “get this many victory points” (calculated from a variety of things), “produce this much of these specific resources,” or “fully terraform the planet.” While there’s currently no free-play option, the developers released a roadmap upon the game releasing into early-access and that’s one of the first few goals. 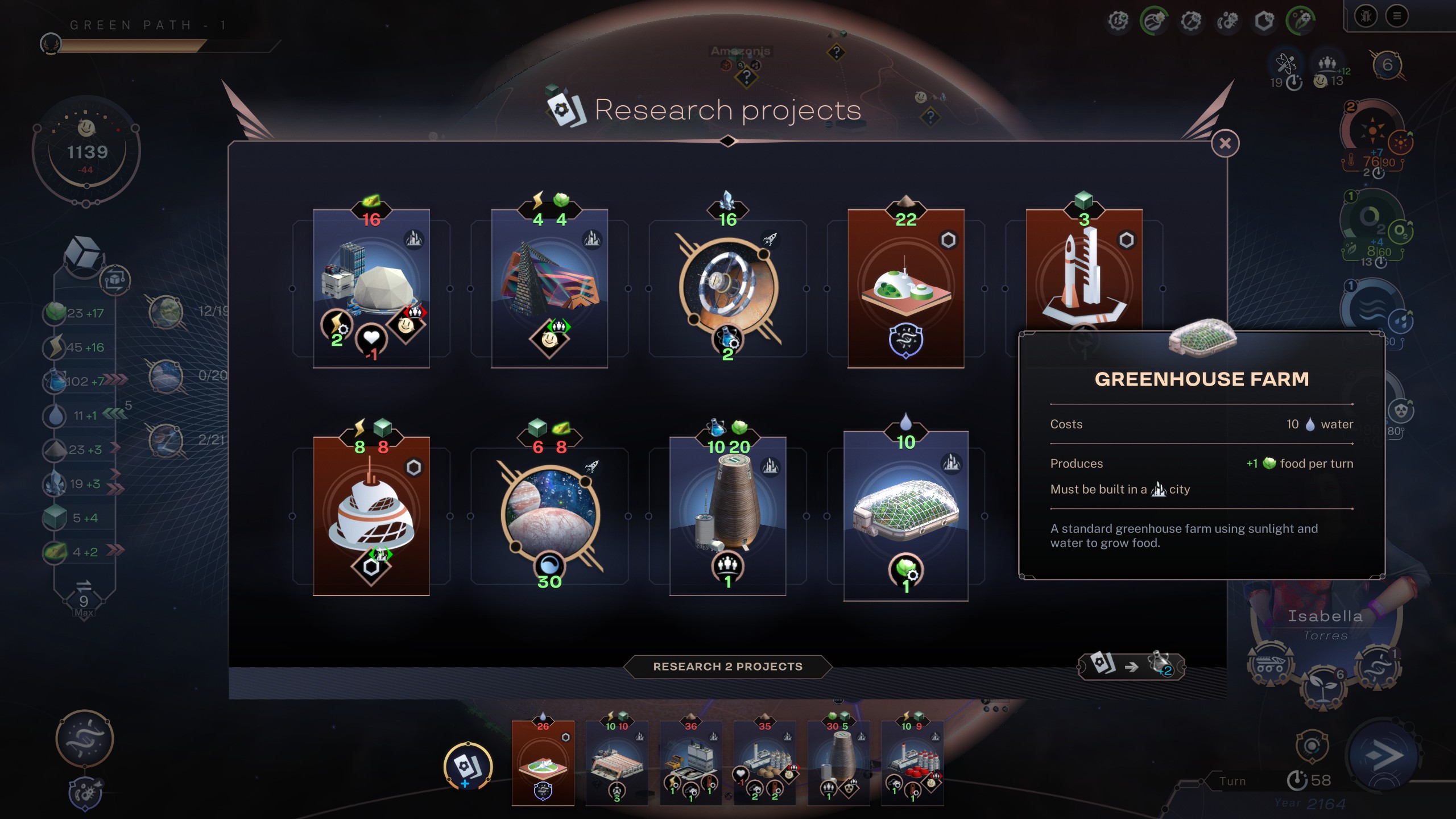 Some of the projects you get to choose from each turn. (Normally you start with just three choices; in this screenshot I've built some buildings that increase the number available, and this is actually the largest I've ever seen.)

Terraformers plays fine on Linux, and has had a native version from the first day the prologue came out (and even before that when it was a Steam Next Fest demo). On release, Terraformers had a critical bug on Linux that prevented progress past the first turn, but after a few people reported it on the game’s Discord server the developers were very responsive and fixed it the next day. (In the meantime, it worked flawlessly on Proton.) Other than that I’ve never encountered a crash or major bug in my nine hours in the prologue or the eight hours I’ve played of the full game so far, so I have no reservations recommending it.

Overall I quite enjoy Terraformers; it’s a relaxing game with a great art style and no time pressure, which allows you to challenge yourself to beat your previous best. (It has a bit of a “board game” feel to it, if that makes sense.) If there's one thing I'm not entirely sold on it's that there's definitely a large element of randomness to the game. The map is randomly generated each time, so sometimes you might find yourself searching for a while to find more minable nodes of a particular resource or good locations for cities (which can only be built on certain nodes on the planet's surface). Generally, however, it averages out of the course of a game (typically ~50 turns or so in my experience with the scenarios so far), and trade routes do a good job of letting you mitigate resource shortages. This is the fourth game about terraforming Mars in my Steam library, and I expect it’ll be one I return to for a long time to come, especially as the developers continue to add more to it.

We do often include affiliate links to earn us some pennies. We are currently affiliated with GOG and Humble Store. See more here.
About the author - Philadelphus

I grew up gaming on Windows and wanting to be an astronomer, then discovered in college that nothing in astronomy is done on Windows. Having been exposed to Linux at work, here I am a few years later using Linux exclusively at home.
See more from me
Some you may have missed, popular articles from the last month:
5 comments

View PC info
Seen this game a lot on Twitch lately, but had no idea what was going on. Enjoyed the writeup, thanks. Just me or are there a lot of Mars games coming out lately? Red Planet Farming and Planet Crafter come to mind.

EDIT: Red Planet farming actually came out in 2018, which also saw the release of Terraforming Mars (no relation to Terraformers). Maybe 2018 was the true Mars gaming year.

EDIT: Red Planet farming actually came out in 2018, which also saw the release of Terraforming Mars (no relation to Terraformers). Maybe 2018 was the true Mars gaming year.

Could be. Surviving Mars was also released in 2018.

As for Terraforming Mars, boardgame was out already in 2016. I don't know how big influence it was for rest of the games.
4 Likes, Who?

Cheers! That does seem to be the case. There's also Per Aspera, which came out in 2020.
0 Likes
Purple Library Guy 25 Apr

Cheers! That does seem to be the case. There's also Per Aspera, which came out in 2020.

Say, Philadelphus, you look kind of different. I could swear you used to be a lot more green, and less anthropomorphic.
1 Likes, Who?

Quoting: Purple Library GuySay, Philadelphus, you look kind of different. I could swear you used to be a lot more green, and less anthropomorphic.