Yes, the Steam Deck will eventually get Ray Tracing, once the AMD GPU driver matures

There's been a lot of talk lately about Ray Tracing and the Steam Deck, especially after the recent Digital Foundry video but there's a few things that need to be cleared up.

As a reminder: the Steam Deck runs Linux, specifically it's SteamOS "Holo" based on Arch Linux. Right now, Ray Tracing is supported on Linux both for Native Linux titles and Windows title through Proton. NVIDIA has supported Native Vulkan Ray Tracing a long time now, and DirectX Ray Tracing (DXR) is getting into shape too with VKD3D-Proton (that translates Direct3D 12 to Vulkan) version 2.5 that was released back in October 2021 mentioning "DXR 1.0 support is more or less feature complete" and "DXR 1.1 is now experimentally exposed".

For the Steam Deck, the issue isn't specifically to do with Proton. The problem is largely the open source AMD GPU driver in Mesa named "RADV", that just isn't ready yet. Our friends at Phoronix have covered a lot of the bring-up work involved. It works, but it's slow and improvements on it are being done constantly. While there may be some adjustments needed in Proton (which is likely true for NVIDIA too), the key point is the GPU driver on the Steam Deck. You can even enable it per-game right now, by setting this as a launch option: RADV_PERFTEST=rt %command% but again it won't work well. DirectX games likely still need VKD3D_CONFIG=dxr / VKD3D_CONFIG=dxr11 launch options depending on what they use, as noted in the VKD3D-Proton release notes linked above.

Quake II RTX for example runs on the Steam Deck but as you can tell from the screenshot — not well. First is the default OpenGL renderer, second is RTX (click them to enlarge): 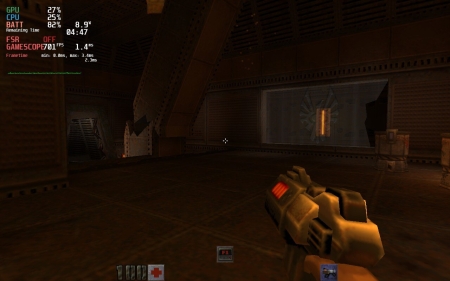 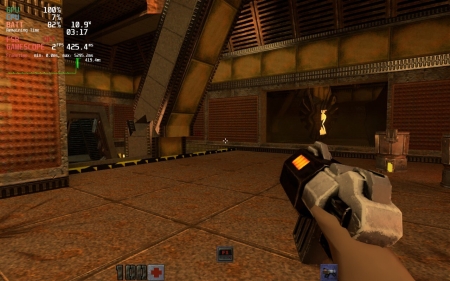 For Control, swapping it to Proton Experimental from the default Proton 7 (guide here) and having the launch option set as: VKD3D_CONFIG=dxr RADV_PERFTEST=rt %command% enables the Ray Tracing options to be enabled on Steam Deck too. First picture is the default graphics, second is with Ray Tracing turned on Medium: 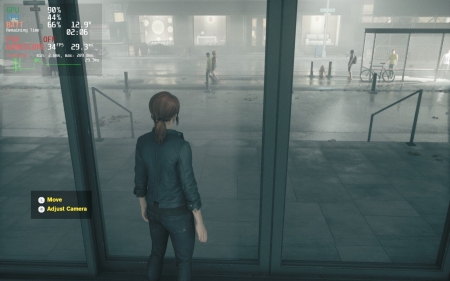 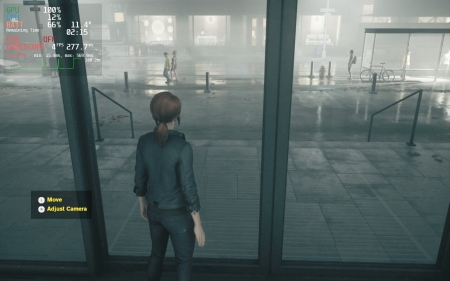 Eventually, once the RADV driver is in good shape for Ray Tracing performance, I do expect it to work okay on the Steam Deck when Valve pull in the needed driver updates into SteamOS since some of it is already clearly there, just hidden behind that launch option above.

Hopefully that clears it up somewhat as a few other much bigger websites have mentioned things like "RT features cannot be accessed from Linux" (Eurogamer) and thinking it's Proton itself that cannot "recognize Steam Deck's RDNA 2 cores" (Ars — which was also wrong on Quake II RTX, it's a Native Linux build and doesn't use or need Proton) and whatever else other websites say. Even Digital Foundry were technically incorrect in the video. Really, the point is just to clear up some continuing misconceptions of Linux and the Steam Deck.

Anyway, the DF video is below if you wish to see: 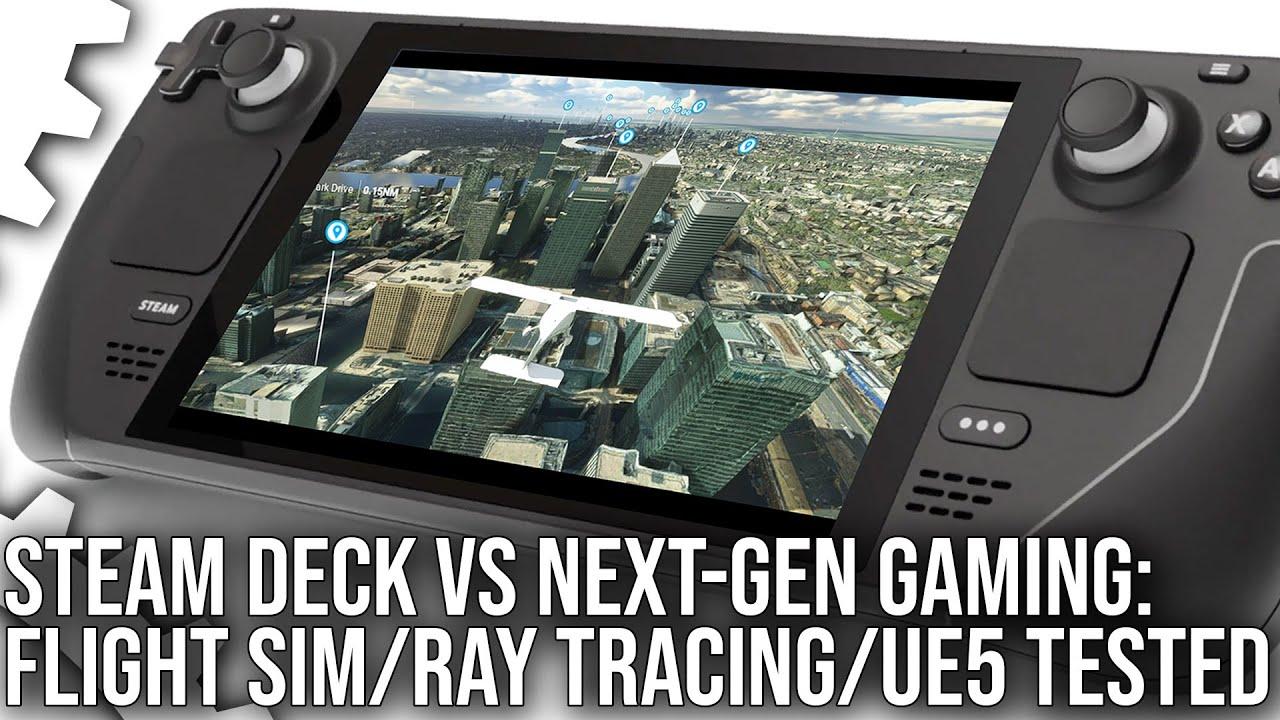 Personally, I don't see Ray Tracing as the key to anything when it comes to the future and longevity of the Steam Deck. What we need is more developers taking a look, and optimizing for it directly so that games still look good and play well, considering it's a portable with limits.

View PC info
Thanks for writing this. It was annoying me as well, that outlets weren't quite getting what the deal was; now we can all just point them at this article :)
7 Likes, Who?

View PC info
Is RADV on the Steam Deck even using dedicated RT hardware?
I mean, Quake 2 RTX is nearly playable on my Rx 480 (which is ancient and obviously does not have hardware raytracing) if I enable "RADV_PERFTEST=rt" and use a low-enough resolution...

jordicoma 14 Apr, 2022
View PC info
Just an hour ago I was looking for trying quake 2RTX with my new rx6600xt that arrived yesterday.

I just tried and it has 2 brown big polygons and 0.5fps. Hope it improves

QuoteQuake II RTX for example runs on the Steam Deck but as you can tell from the screenshot — not well.

Even with the Windows ray tracing that DF were so excited about in the video, they needed to turn the resolution way way down to get any performance at all.
1 Likes, Who?

Quoting: GuestNot surprised DF were so wrong but then they're tech enthusiasts, not journalists.


I kind of feel that's the wrong way round. At least, you would imagine a tech enthusiast to look into the actual underlying technical detail and a journo to spout off surface level tidbits & quotes for the uneducated masses to chomp on.

Most 'tech' (hate that word now TBH it's been ruined) enthusiasts of today are just Bugmen who like shiny toys, marketing fluff for sponsorship money. they aren't actually capable or interested in the 'nerdy details' i.e the way something ACTUALLY WORKS.
6 Likes, Who?

View PC info
To be fair to Digital Foundry and co they are used to playing in the console and Windows PC sandbox, and they are very much fish out-of-water in terms of Linux.

Give it time and they will become technically astute Linux users too.
3 Likes, Who?
TheRiddick 15 Apr, 2022

View PC info
RT with my 6800XT has never worked correctly or at all. I've used mesa-git/dev releases too. Sometimes it would work but fps was unplayable, other times it would have major graphical issues (like on The Ascent), and then other times it would crash my entire system like someone ripped out the 6800XT from its socket (like trying to use RT in CP2077).

So to say RT in RADV needs more work (even amdgpu-pro drivers are borked for most things) is the understatement of the year!

ben-green 15 Apr, 2022
View PC info
Underlying the mistakes around understanding of RT on Steam Deck, and on Linux in general, are misunderstandings of the driver situation. For most recent AMD hardware Linux users have a choice of the AMD drivers (AMDGPU-Pro) and Mesa. The Mesa drivers are solidly outperforming AMD's own now, due in part to Valve's contributions to the shader compiler ACO (AMD COmpiler). This is what the Steam Deck uses. It was really strange to hear Digital Foundries say at 3:15 in that video:

"... before we do that this does offer us the opportunity to run the same games on windows as we've already done on Steam OS and to kind of try to calculate the efficiency of the proton compatibility layer."

No, it can't ever do that because you are comparing a completely different driver, with a code base truly varying at all levels of the stack. The comparison you are making is { Game -> Windows Drivers } vs. { Game -> Proton -> Mesa }. Mesa is doing so well, but lacking RT support.

It would be good to have an article clarifying which drivers are available, which are default, and their strengths, weaknesses and platforms supported.
3 Likes, Who?
1/2»
While you're here, please consider supporting GamingOnLinux on: