No need to wait on Valve, the Steam Deck Docking Station from JSAUX is great

While many will no doubt wait on Valve for the official Steam Deck Dock, a lot of hardware vendors are coming out with their own versions. JSAUX are one of them and they sent over their Docking Station for Steam Deck for me to take a look at.

Since the Steam Deck is a full PC, you might want to hook it up to a proper monitor to use the desktop mode or just on your big TV and this will allow you to do just that without fussing around.

JSAUX actually sent over both their original model and the newer upgraded version (HB0603). Testing both, I've come away very impressed. Honestly, at this point, you probably don't need to wait on Valve for the official one because the Upgraded Docking Station for Steam Deck from JSAUX does pretty much everything you need and it works a treat. While you could go for any number of USB-C hubs from the likes of Amazon, there's something special about a proper dock like this designed and tested to work nicely directly with the Deck.

Testing it extensively with my TV and my PC monitor, I've really not had much trouble at all. Most of my issues were just software quirks on the SteamOS side, and as Valve continue to improve the docked experience with SteamOS upgrades over time the quirks will be improved and they've done work on that a few times recently. 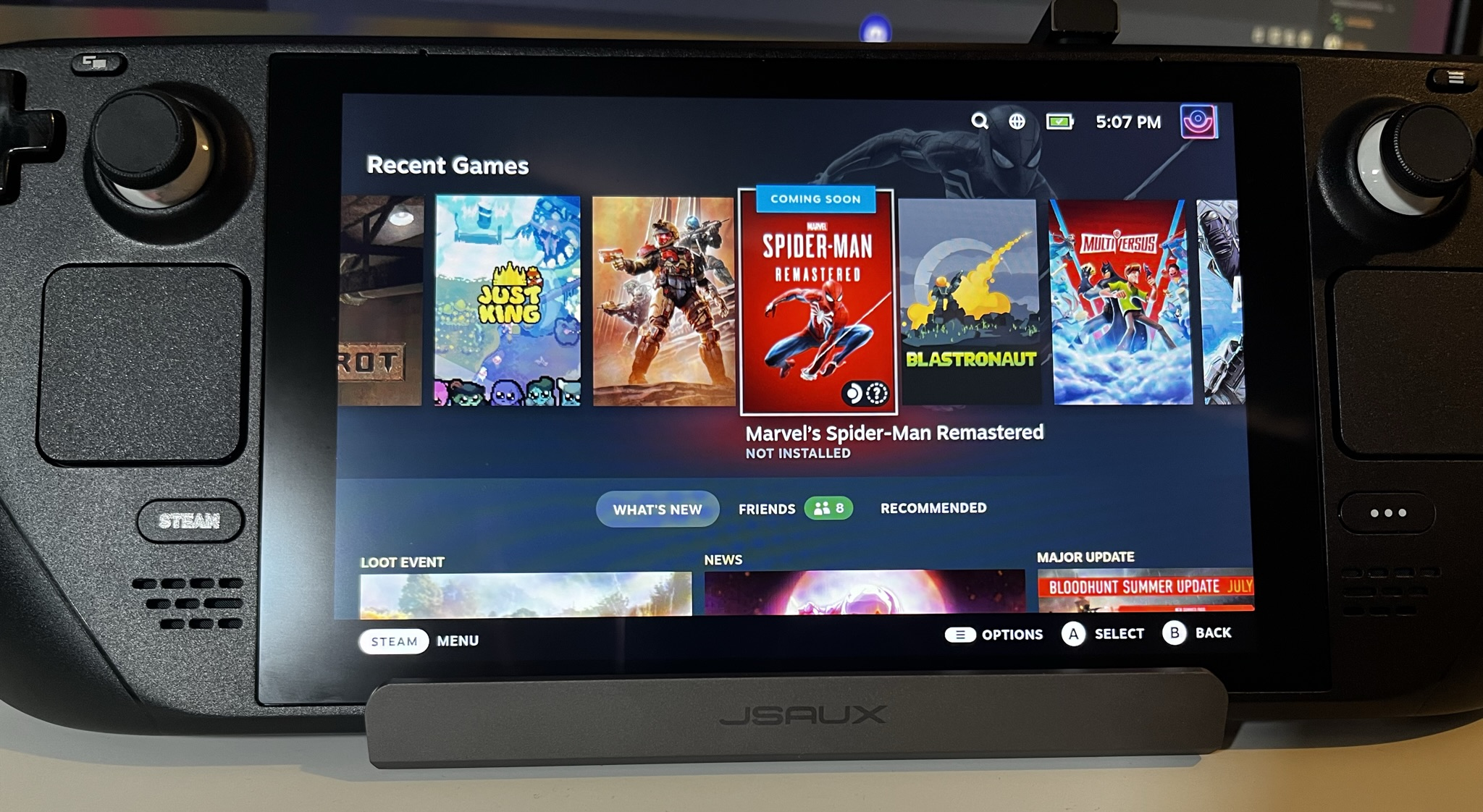 The upgraded model (which I ended up sticking with) features gigabit ethernet, USB-C for the charging, three USB-A 3.0 ports and HDMI out with 4K 60hz support. The charging is full-power too, so no problems leaving it on charging through the Docking Station while you're using it.

How good is the ethernet? Does the upgraded model have a better speed like it says? Absolutely, you're going to have no issues with ethernet speed on the higher model. 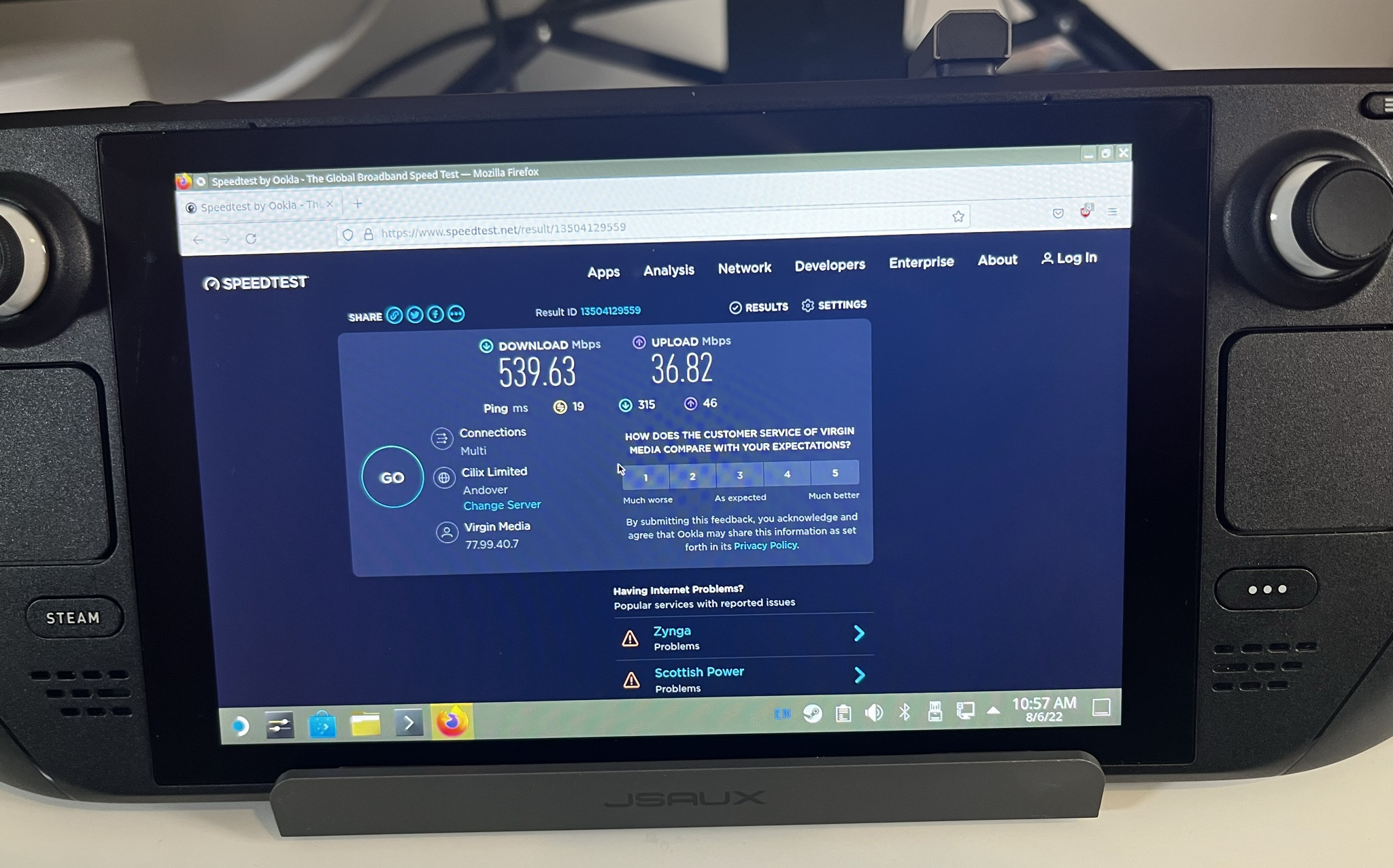 For the most part, the design is close to perfect. While it might not be perhaps as slick as the Nintendo Switch dock with you just sticking it straight in, the design of the Steam Deck doesn't really allow that. JSAUX went with an easy approach here though. Just place the Deck into the gap at the front, then pull over the attached USB-C cable that fits perfectly. With some great anti-slip pads included, the Deck won't be moving while sat inside it. Great build quality too, it looks and feels pretty premium. My only real gripe with the design is the ethernet being on the side, it would have been better if that was on the back too as you can see the ethernet poking out.

Really, there's not a whole lot I can actually say about this without padding it out unnecessarily and that is absolutely a good thing. Everything works great. It's a simple device with a simple purpose and is exactly what you want to nicely rest the deck while powering / charging and gaining a few more ports.

We still don't know how much the Valve model will cost, and it won't exactly offer a great many advantages over this. Sure it has an added DisplayPort and a bump from USB 3 to 3.1 but I imagine a lot of people won't actually need that. So really JSAUX are positioned well here with pretty reasonable pricing too.

You can buy each model at the links below. Really, just get the upgraded model though unless you're really penny-pinching:

I can happily recommend it. It's now one of my favourite Deck accessories from anywhere.

I need to check out the delivery fee, but sounds like a good way to get one.

Tho my deck isn't delivered yet, but that's good to have a not so expensive choice here.
0 Likes
Miles 1 Aug
...aaaaaand ordered! ...Along with a BUNCH of other stuff. :P
2 Likes, Who?
Miles 1 Aug

Quoting: MisterPaytwick$50 for a dock?

I need to check out the delivery fee, but sounds like a good way to get one.

Tho my deck isn't delivered yet, but that's good to have a not so expensive choice here.

They gave me free shipping on my order.
0 Likes
Kithop 1 Aug

View PC info
Neat! My partner and I have been playing our new Steam Decks a heck of a lot more than spinning up big, loud, hot gaming rigs this summer, and her PC is getting old enough now that the Deck isn't even really that much of a downgrade, so I'm very tempted to get a dock for her and just... let her have this as her everything-PC.

That said, I do genuinely want a DisplayPort out as an option, so I think I'll sit tight and wait for Valve here; we have some other generic USB-C 'docks' (really dongles) that came with e.g. a work laptop or a smartphone that work - having a full mouse + keyboard definitely made setting up all the stuff in KDE Plasma / 'Desktop mode' wayyy nicer.

The nice thing about using actual standards, of course, is that these 3rd party offerings can exist at all, and unmolested, to boot, and don't have strange non-compliant setups reusing the same connectors (looking at you, Nintendo). ;)
4 Likes, Who?

View PC info
I ordered the $50 one a month ago. Hopefully it arrives some day in the next month.
2 Likes, Who?

pmk1c 1 Aug
View PC info
I‘d really like to have a docking station with HDMI-CEC Support, so it can start and stop my TV when (dis)connecting like every TV console does. I guess this needs support from the Deck AND the station, but I‘m not sure. Has anyone more info on that? Or is the JSAUX maybe even capable of doing stuff like that?
0 Likes

M@GOid 1 Aug
View PC info
The side port for Ethernet must be that they are utilizing a existent PCB, and changing the case form factor to accommodate the Steam Deck.
0 Likes

View PC info
I've got a Dell docking station for my home work setup and it works really well, but doesn't look as good as that or keep the Deck upright. Also cost my employer almost $200USD.
0 Likes

View PC info
I also ordered several items from the them more than a month ago and they havnt shipped. I sent them a message last Monday asking when they planned to ship and they asked me to "wait a day please" that was 6 days ago now and no further response or fulfilment.
3 Likes, Who?
1/2»
While you're here, please consider supporting GamingOnLinux on: