Rollerdrome is a thoroughly odd blending of mechanics and style found in the likes of Tony Hawk Pro Skater, a little Jet Set Radio and Max Payne. This is easily one of my biggest surprises so far this year. Runs great on Linux with Proton and Steam Deck Playable.

A game all about style, with combat thrown in. There's no filler here and no crazy unlock systems. Just you, some skates and some guns. This is a single-player third person shooter that has you skate around, take down enemies and do some pretty cool tricks to get your ammo back up. I've been pretty amazed at how ridiculously fluid the skating is in this game and yet somehow it's also a pretty good shooter too. 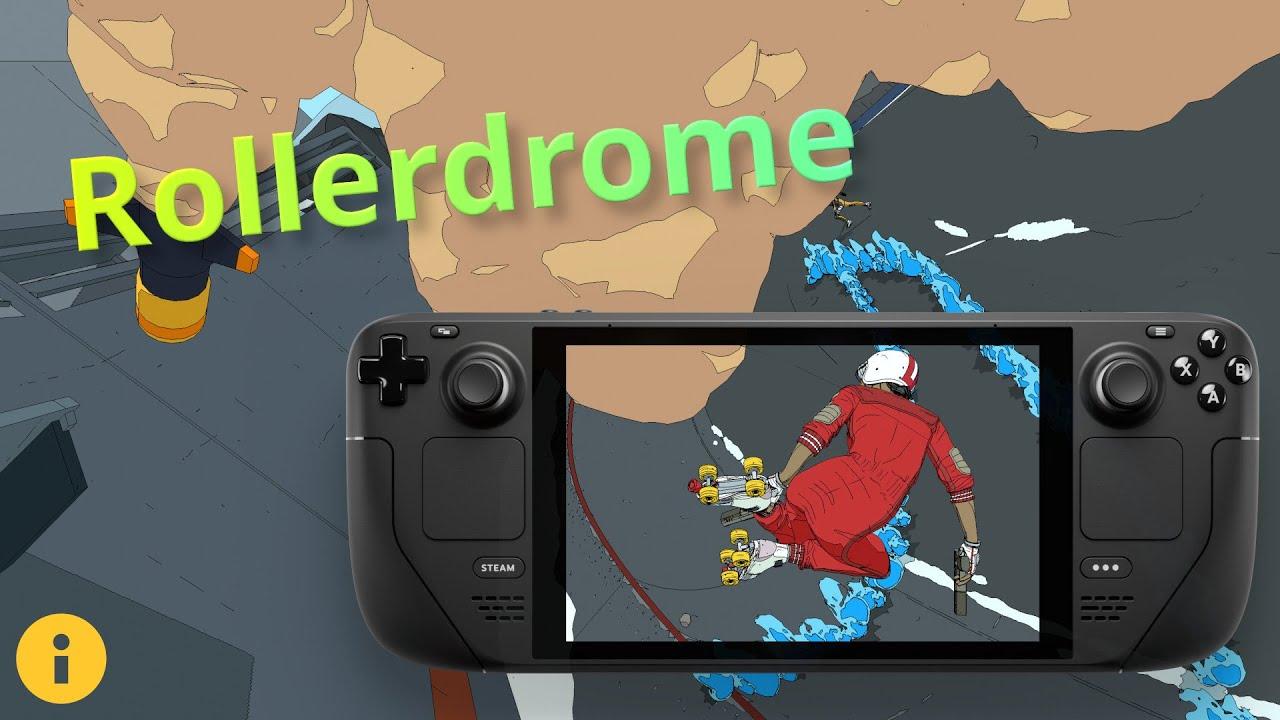 There's plenty to love about this game. While it's fast-paced it gives you plenty of wiggle room to be rubbish. Not only does it have an element of auto-aim so you don't need pin-point accuracy but there's also a Max Payne style bullet-time to make it that much easier on you. It will still make your fingers and thumbs ache though but it's a whole lot of fun. The point isn't just the shooting though, it's about looking ridiculously cool while doing it and that's largely the focus of it. Perfecting dodging, shooting while grinding, grinding along a wall, spinning in the air while taking out a sniper — it wants you to look awesome.

It is a sport after all, the whole idea of the setting in Rollerdrome is that this is a blood sport in a world where corporations rule and they keep the masses distracted with ridiculous things like this. Sounds almost like real-life.

Another point to like about it is that each mission has various challenges for completionists and high-score chasers. However, even that was done to a point where it's accessible and not overly difficult. You can re-run levels any time you want and completing a challenge doesn't need you to actually win the level again. You can jump into a level, complete a challenge in thirty seconds and die and it keeps that you've done it. I really like this. Something extra to work towards without being annoying about it. Makes me want to come back for more and not need to put it down and take a frustration break.

That's only briefly touching on the gameplay feel. The rest of it is brilliant too from the musical score to the art style. The soundtrack is suitable dystopian sounding like it's out of a futuristic movie and the art is stylized without looking cheap, it all comes together very nicely.

Grogan 20 Aug
View PC info
Sounds amusing, I may try that just for the fact that it's unique.
1 Likes, Who?

View PC info
I discovered it when the topic of ligne claire was raised on Fortune's Run's Discord.

It seems to be in a weird-ish niche that has some nice appeal to me. I just hope the devs manage to get some really good performances out of this. It seems to be the kind of game where it's possible to do so (small-ish spaces, the artstyle allow to cheat on a lot of this and avoid those heavy computation, etc).

Is the autoaim mandatory? I'd rather fuck up 80% of my shots first over feeling forced to have that.
2 Likes, Who?

View PC info
Tony Hawk's Pro Shooter
1 Likes, Who?
trev0r 20 Aug
I didn't think I would like it, but the game is fun as hell.
0 Likes

Grogan 20 Aug
View PC info
The game mechanics seem really good. I'm not going to play it properly (not going to do those moves and key combos) but I was impressed with the game play physics. For a Unity game, too. They also make it so people who are only mildly interested can play it, I don't have to get carpal tunnel syndrome, I can just relax and shoot people while flitting around on roller skates. I accomplish "challenges" just by fumbling with the keys too while jumping and stuff :-)

I appreciate the cheats in the "Assists" menu. Turning off leaderboards is a feature to me, not a penalty (I hate that shit).

This amused me for an hour or so last night, so mission accomplished. I'll play it some more, I was enjoying it when I quit.
0 Likes

View PC info
Looks cool. I hope the release it on GOG.
0 Likes

Ready to get it when it will be modded to look like:
https://en.m.wikipedia.org/wiki/Muteking,_The_Dashing_Warrior
0 Likes

View PC info
Sounds fun, especially the last part of the video when it seems to become a bit more challenging.
Can you play with multiple players? Does it have combos like more power, more something if you perform complex stunts?
0 Likes

Quoting: Geppeto35Sounds fun, especially the last part of the video when it seems to become a bit more challenging.
Can you play with multiple players? Does it have combos like more power, more something if you perform complex stunts?

No multiplayer, there's no way for that to work with bullet time. Combo is only for scoring here I think, and you maintain it by killing and grabbing the five tokens scattered around each arena. Tricks feed your score and refill your ammo, with bonuses to both for complexity and variety. Perfect dodges, super reflex (entering bullet time right after a perfect dodge for bonus damage), and at least one weapon-based damage multiplier add more to the timing & situational awareness aspect.

Can confirm it is extremely fun.
0 Likes
Deleted_User 23 Aug

I have to say it looks really cool. I really appreciate the art style, since i'm really fed up with pixel art (i suspect at least 80% of the developers of "pixel art" just being lazy) and not a huge fan of voxel art - so there isn't so much left over given that linux-playable and medium computational ressources are also limitations.
0 Likes
While you're here, please consider supporting GamingOnLinux on: