Steam Charts, the name of the new system Valve just launched gives us a better look behind the curtain on how games are doing on Steam overall. This replaces the basic stats page that showed the online count for Steam and the Top 100 most played games with a lot more information.

We still have the Most Played games list, although it's a bit more real-time as it's updated every 5 minutes now and it gives you a little more info like the price and any current discount making it a lot more useful: 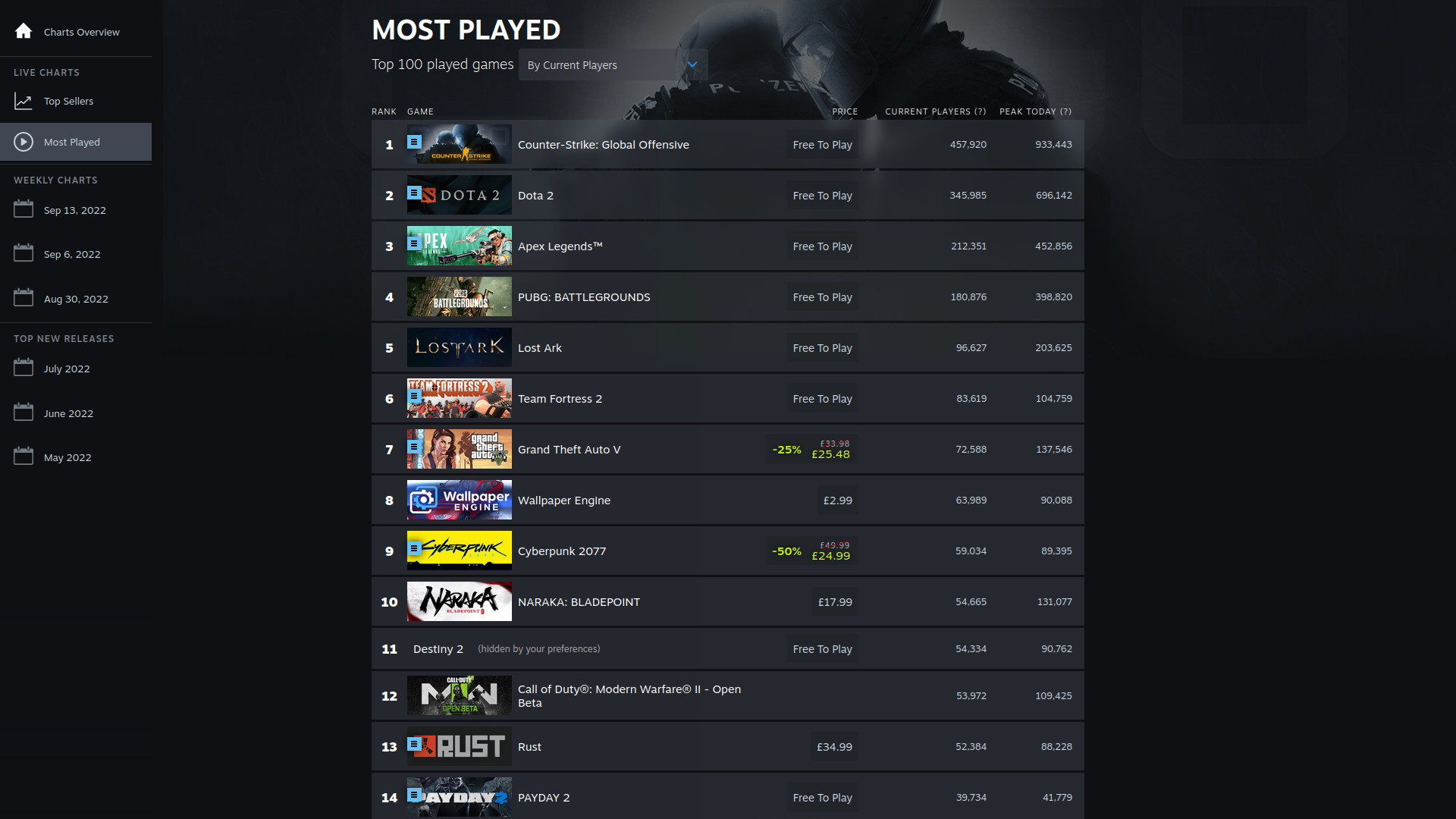 The brand new Top Sellers system is also pretty slick. Giving a real-time look at what is the most popular on Steam, with you being able to filter it to various countries. This includes the number of weeks in the top sellers, the weekly change in rank and it accounts for the total revenue (DLC, various different editions etc). If a DLC for a game is what bumped it up the list, that will be noted too. 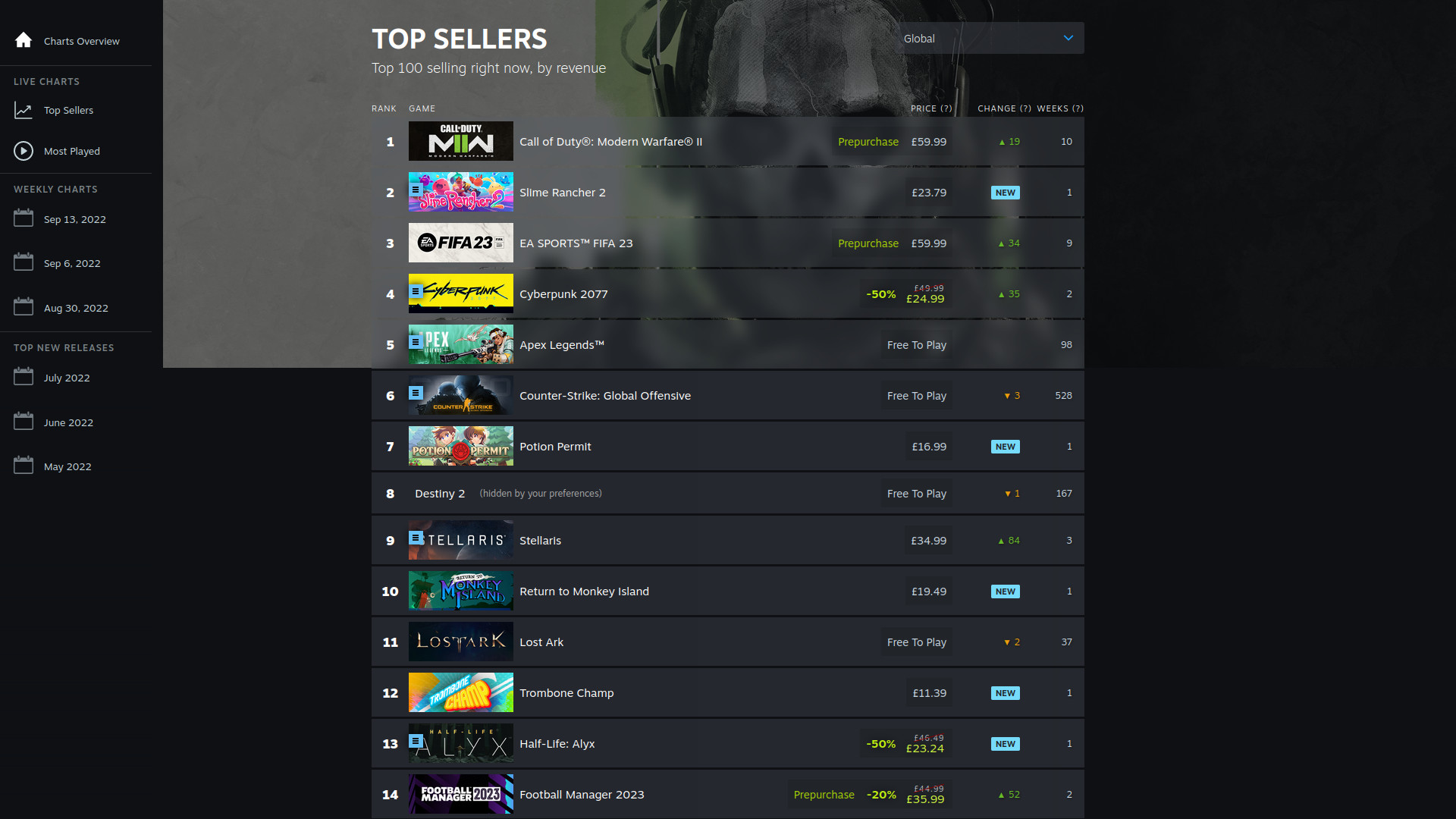 Interestingly though, it doesn't list the Steam Deck here but they are listing that in their Weekly Charts still. Probably makes some sense, given that it's not a real-time thing you can just purchase at any time since it's still in the reservation system. So once there's no queue, it may end up in the real-time list. 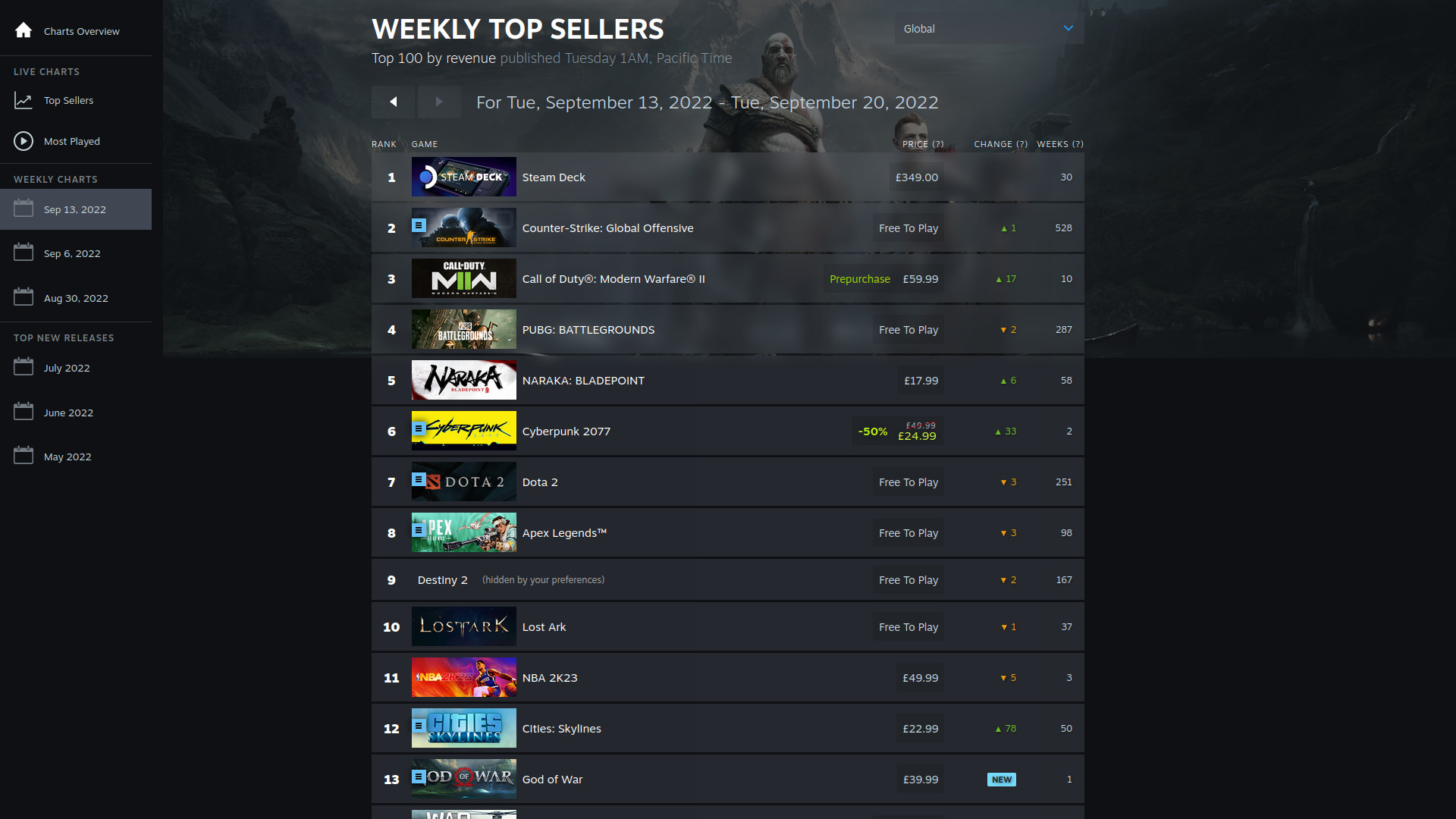 Once again, it's great to see Valve continue to give more information to users and continue upgrading their store.

Given how the industry is often rather secretive about any form of stats on their games, it's thoroughly refreshing to see Valve actually make this a more prominent and useful feature.

View PC info
Hah - seems we have the same games in our libraries, with God Of War being the only exception :)
0 Likes

Bumadar 23 Sep
Bit of a shame for https://steamcharts.com/
1 Likes, Who?

View PC info
I love this, looks nice, clean and everything in the client. I just hope we could get some addons for steam also. Could be curated. Like steamdb, ability to covert eu/dollors to sek or any other currency. And other cool addons.
1 Likes, Who?

Lachu 23 Sep
This maybe disallow grew up for new companies, but it is free market law.

If vendors of top-sellers would made a discount to kept their titles on the top-sellers list, we will had a problem. Maybe there no new company will emerge, not new games, etc. :-(
I hope it would not be true.
1 Likes, Who?
Purple Library Guy 23 Sep
I notice that there are free to play games in the "Top sellers, by revenue" category. How does that work? I guess 30% of zero is better than nothing . . .
0 Likes

Quoting: Purple Library GuyI notice that there are free to play games in the "Top sellers, by revenue" category. How does that work? I guess 30% of zero is better than nothing . . .

I guess they count in in-game payments (rightfully so)...
1 Likes, Who?

Quoting: Purple Library GuyI notice that there are free to play games in the "Top sellers, by revenue" category. How does that work? I guess 30% of zero is better than nothing . . .

QuoteThe new top-selling lists rank games based on total revenue, including all sources such as DLC and in-game transactions so we can all get a more complete picture of which games players are excited about getting into and continuing to play.

5 Likes, Who?
While you're here, please consider supporting GamingOnLinux on: