Well, this wasn't what you were expecting to read was it? After years laughing about people who go over the top with RGB lighting in their PCs I am now a convert.

I've never really been into the hardware customization side of PCs but I think that's about to change. All it took was a good PC case I wanted to do more with and now I want to see how far I can push things. I want people to walk into my office and be blinded by the power of my PC. Something like that anyway.

You see, recently I picked up the Fractal Design Torrent PC case, and I did a successful transplant. The operation was a complete success, although touch and go for a moment with a few bits of sweat and some tears, IT LIVES! Two annoyances though: the first being the spacing between where you connect up the SSDs and the mass of wires coming down the back from the front panel, and needing some completely flat SATA power connectors for the HDDs (I have a lot of drives).

It truly is an absolutely gorgeous case, a recommendation from the GamingOnLinux Discord and I couldn't be happier with the result. 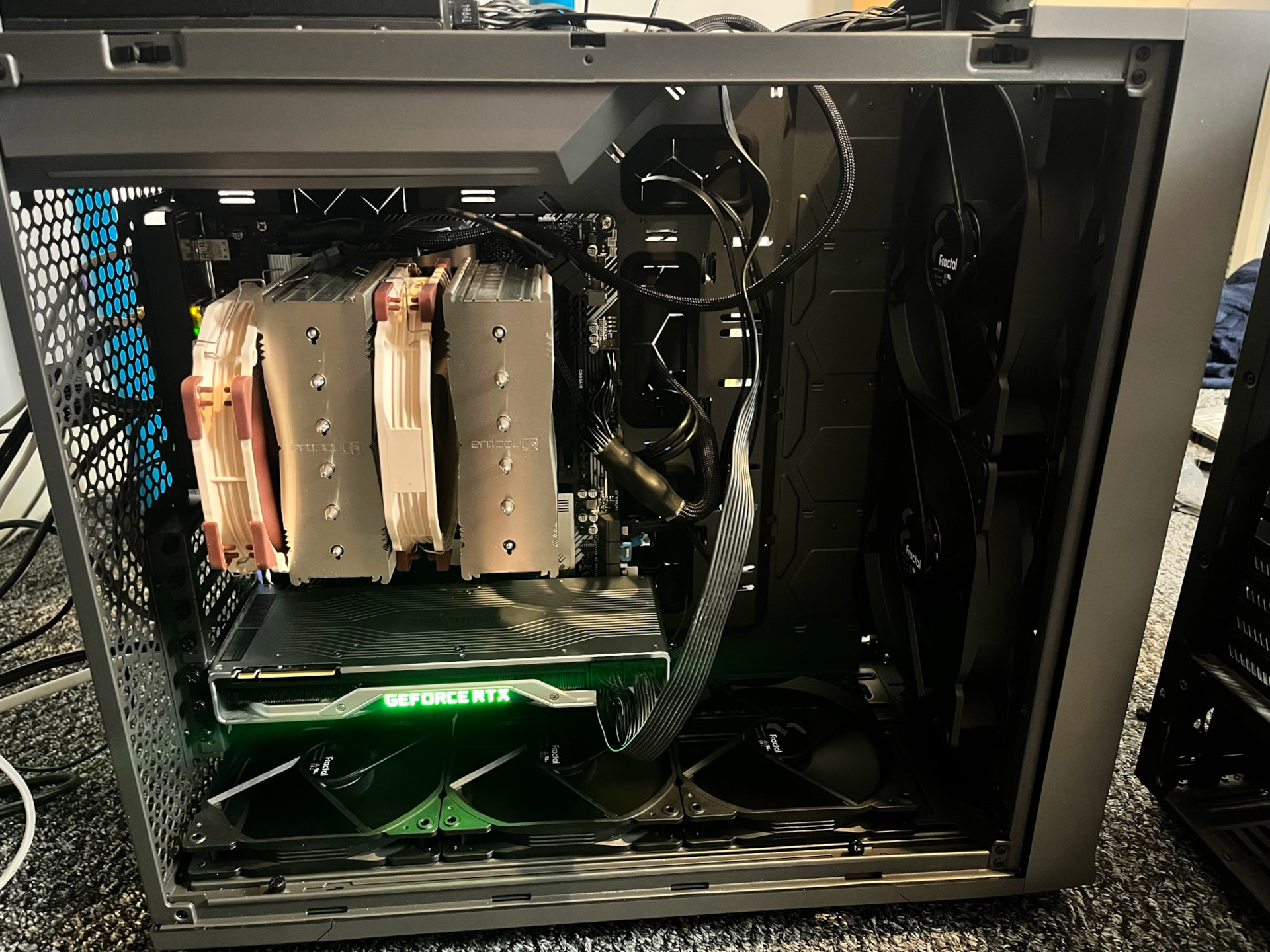 Now I have a nice case, and the inside looks pretty tidy with glass panels to see into both sides of the machine — I thought "why stop there?". So, doing something I never thought I would, I shopped around for some colourful additions to place inside the case.

I ended up going for the Addressable Speclux LED Strip Light. Cheap and cheerful for my intro into the world of RGB lighting. A great decision too as it turns out, because even though it's cheap and I only have two strips, I'm just a little bit more in love with my PC now. Thanks to this, my rather dull office has been lit up and I can suddenly see why people like RGB LEDs so much (and just RGB lighting in general), because it really does give you a little extra spark of happiness and that should never be underestimated.

Thanks to my motherboard having a connector for RGB lights, I plugged it in there and stuck the strips into my case and when powering on my case came to life. I'm all excited about it for another reason though, a fun bit of open source software called OpenRGB. Regular readers have probably seen it, because I've written about it a few times now but never really used it properly myself — until now.

With OpenRGB you can control the lighting on many different devices, and it works very nicely. My surprise here again though is that directly from my Linux desktop with OpenRGB, I can change each individual LED to a different colour, set up profiles, effects and more. Gosh, I love open source developers doing amazing stuff like this.

So now I have a good case, and it looks awesome. Bring on the rainbow.

I can happily recommend both the case and the lights.

I wonder what else I can do to make it even more ridiculous. What do you suggest? Have you set up your gaming rig with some cool lighting? Let me know all your thoughts in the comments. Show me your rig.

About the author - Liam Dawe
I am the owner of GamingOnLinux. After discovering Linux back in the days of Mandrake in 2003, I constantly came back to check on the progress of Linux until Ubuntu appeared on the scene and it helped me to really love it. You can reach me easily by emailing GamingOnLinux directly.
See more from me
Some you may have missed, popular articles from the last month:
31 comments
Page: 1/4»
mr-victory 28 Dec, 2022
View PC info
Welcome to the Light Side, Padavan!
4 Likes, Who?

Too much energy wasted imo.
I used to have led strips on the back of the monitor connected to an arduino to react to screen content.
I wrote the sketch for arduino, is here:
https://github.com/kokoko3k/adalight-smart
But for the same reason, they are sadly turned off now.

View PC info
It's always a relief when it powers up for the first time.

Looks great! will be better when the rx7900 arrives

Quoting: buonoIt's always a relief when it powers up for the first time.

Looks great! will be better when the rx7900 arrives

Sadly, no 7900 for me. OverclockersUK oversold on it and didn't actually have my order in stock - they did this to quite a few people. I will never shop with them again.
5 Likes, Who?
Lofty 28 Dec, 2022

But that's why you offset that with using a steam deck.


Quoting: Liam Daweit really does give you a little extra spark of happiness and that should never be underestimated.

Turns a monolithic black box into something a little less bland. But i prefer subtle lighting and it costs less.

Quoting: Liam DaweI wonder what else I can do to make it even more ridiculous


A-RGB Fans (not RGB). They should be controllable if you select the right fan model by the same software.

On my laptop keyboard LEDs draw ~4W which decreases battery life a lot for me. (2.5 hr -> 2 hr) On a desktop where your GPU pulls 300W? Leds are very innocent.

View PC info
🎵 Why are there so many
Computers with rainbows
And what's on the other side? 𝅘𝅥𝅮🎵
7 Likes, Who?

View PC info
I just want RGB LEDs to not be a mandatory part of any hardware that costs more than $5. Nothing against it as extra stuff. I have leds on my motherboard and GPU, and I wish I had them without leds. But I have no choice.
11 Likes, Who?

People can hate on it all they want but you really hit the nail on the head here:


Quoteit really does give you a little extra spark of happiness and that should never be underestimated.

It's really amazing how far OpenRGB (and OpenRazer for that matter) has come in just the last two years.
0 Likes

On my laptop keyboard LEDs draw ~4W which decreases battery life a lot for me. (2.5 hr -> 2 hr) On a desktop where your GPU pulls 300W? Leds are very innocent.

20 or 30watts are 20 or 30 watts.
They are not justified because something else draws even more.
8 Likes, Who?
1/4»
While you're here, please consider supporting GamingOnLinux on: