The Fertile Crescent, a currently free RTS that's like a retro Age of Empires had a big update

The Fertile Crescent from LincRead is a small real-time strategy game set in the Bronze Age that feels like an indie retro Age of Empires.

It currently enables you to play 1v1 against the AI on random maps and you can also play online battles, it's a pretty sweet idea and it does look good. With the latest update, it works great too as it improves the Linux version quite a lot. During my previous testing, it suffered from now-fixed a Unity bug with some of the screen being distorted. They've upgraded Unity and it's all working great now.

The latest update also adds in the first defensive structure you can build, the Watchtower. 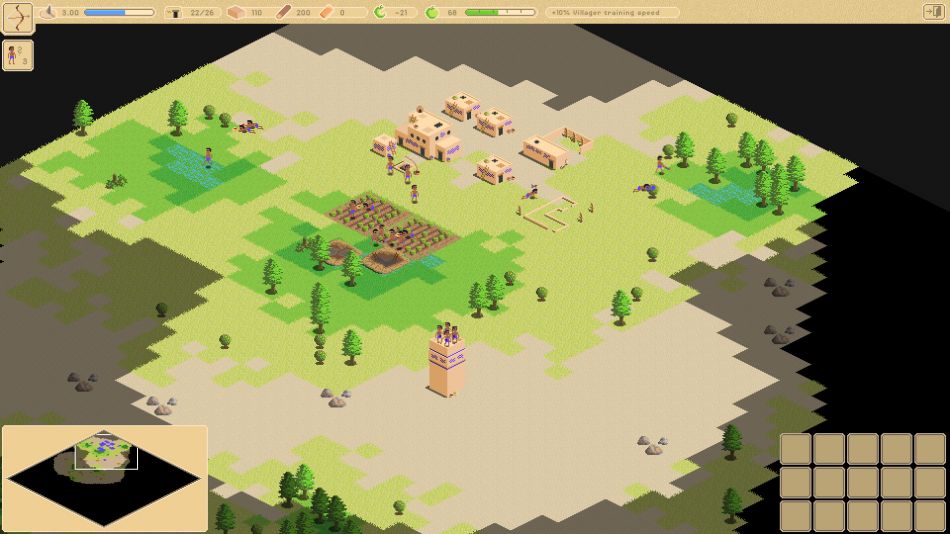 It's a little different to how you might expect it to work though, as it's not the traditional structure you build to just fire at incoming enemies. It acts more like a garrison, with you putting troops inside to shield units, while also giving them increased vision and attack range.

They've also tweaked the combat to last a bit longer and be less of a click-fest, farming and foraging speed has been increased a little so you worry less about starving and have the ability to build a bigger army, new villager animations when carrying resources, improvements to the enemy AI and plenty of bugs have been sent back to the stone age.

I actually think it's a brilliant little RTS, really excited to see how much further they develop it. As it stands right now, it's already very playable and quite fun too. I hope they continue to improve the AI, it would be nice to have some more interesting battles when others aren't available online. I think they're onto something here though, exactly the kind of RTS I love to play and great that they support Linux.

You can currently find it free on itch.io.

View PC info
Cool! Watchtower sounds like a Starcraft bunker then :) I will give this a go sometime, is there an in game lobby or how do you find opponents?
0 Likes

Quoting: buenaventuraCool! Watchtower sounds like a Starcraft bunker then :) I will give this a go sometime, is there an in game lobby or how do you find opponents?

It has servers for different regions, so you go in find a game or make one it seems, quite handy.
0 Likes
Purple Library Guy 4 Jun, 2019
Age of Empires . . . that reminds me, did anyone ever do a baseball game called "Age of Umpires"?
0 Likes

Quoting: buenaventuraCool! Watchtower sounds like a Starcraft bunker then :) I will give this a go sometime, is there an in game lobby or how do you find opponents?

It has servers for different regions, so you go in find a game or make one it seems, quite handy.

Cool, OK! Gonna try it out with a linux friend some day then :D
0 Likes