Supraland 2, a sequel to the highly rated first-person metroidvania is crowdfunding and coming to Linux

While the original Supraland isn't on Linux (yet), Supraland 2 is coming and it's currently crowdfunding to make a bigger sequel to the very highly rated first-person metroidvania.

The campaign doesn't really give the best idea of the actual gameplay, as it seems it's largely assuming you already know the first game. It's basically a big play area, full of puzzles, things to combat and this is going to be more of the same with a brand new area and improved combat.

The developer is clear about platforms too, as listed on the Kickstarter campaign: 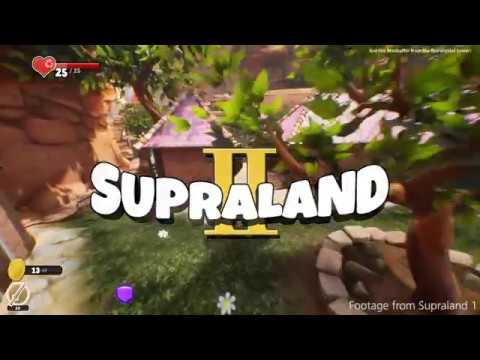 The funding goal is a reasonable €20,000 and with 31 days to go they've already raised over €5,000 so it should do rather well. I also like how clear they are about going exclusive to the Epic store, with the FAQ page simply saying "No.".

As for a Linux release of the original, I spoke to the developer personally about it. They replied with a very clear "Yes, soon." about a Linux version which is great news.

Phlebiac 29 Jun, 2019
View PC info
They also responded affirmatively to the original coming to Linux in the Kickstarter comments:
https://www.kickstarter.com/projects/supragames/supraland-2/comments
1 Likes, Who?

View PC info
I would instantly back this - if it wasn't for the recent Epic-Shit-Store debacles that burned me enough to abandon crowdfunding...

I'm eagerly awaiting Linux for part one, played it a bit via family share + proton and loved it - so good to know that part 2 will have Linux in mind from the beginning :)
0 Likes

Quoting: EikeAnybody knows what happened with their first Kickstarter campaign?

Completely failed to raise any awareness, probably didn't do any marketing and spreading the word at all.
24 backers looks to me like the dev just put the game on there and hoped for the best.

Also not really an easy idea to sell.
If I hadn't played Supraland, I probably wouldn't believe someone could pull that idea off so well.

Now that the first game was such a success, the developer is of course in a much better position to gain funding.

View PC info
Supraland is one of those games that I bought straight up after playing demo version not caring about Linux version (works great in Proton), it was no brainer, loved it. I did 100% the game, it was that good. Excellent combination of puzzle and exploration, especially end game exploration where you are given free rain to go nuts and find the most obscure secrets.
0 Likes

View PC info
Coming to Linux? Gaaahhhh! Ok. I'm gonna wait till then. I want the dev to see my purchase in response to a native Linux release, not as a Windows/Proton sale, so I'll wait. But damn, this looks soooo like my kinda game, it's not going to be easy.
2 Likes, Who?

View PC info
i really would like to back this, but i have such a big pile of shame, that i should resist this urge.
0 Likes

View PC info
Supraland 1 now available for Linux (no store icon yet).
1 Likes, Who?
While you're here, please consider supporting GamingOnLinux on: