The Inanimate Mr Coatrack, a free comedy adventure worth taking a look at

Made for the Adventure Jam 2019, The Inanimate Mr Coatrack from Powerhoof is a rather silly comedy adventure.

The Adventure Jam 2019 ran back in June from the 8th to the 22nd, so considering they only had two weeks I'm astonished at the quality of it. Not only does it have some lovely artwork, the voice acting is amusingly good too, as is the story and gameplay. Not surprising then, that it actually won first place in the Game Jam. 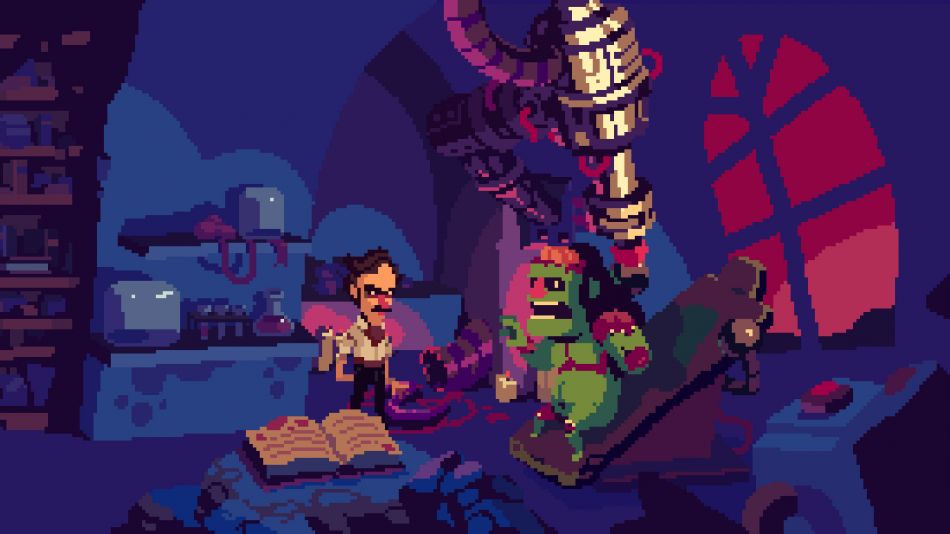 Dr. Victor Bernhardt is on the verge of conquering the last great frontier... Death.

Everything is ready, thanks to the recently deceased Argyle Coatrack, who donated his organs for science... though only his brain was salvageable after his fatal fall from a 3rd story window. But... Mr. Coatrack wouldn't let a little thing like that set him back!

The Inanimate Mr. Coatrack is a bawdy buddy-comedy adventure full of sweary undead shenanigans, jokes about willies, and plenty of dismembered limbs!

It wasn't a perfect experience and I wasn't expecting one from something done so quickly, as it had a few times where it seemed to freeze for a second or two. Overall though, a really good job was done on this. It's the kind of light-hearted dark comedy that sits well with me.

Find it free on itch.io, go and have a good chuckle with it.

Phlebiac 6 Jul, 2019
View PC info
No idea of the quality, but I saw the same developers have a number of other free games (some are adventure games, some are other types):
https://powerhoof.itch.io/
4 Likes, Who?

Quoting: PhlebiacNo idea of the quality, but I saw the same developers have a number of other free games (some are adventure games, some are other types):
https://powerhoof.itch.io/

That's a very looking portfolio.
Plus they seem to have a sweet spot for Linux.
2 Likes, Who?

View PC info
I played Crawl since forever, lately got the Regular Human Basketball and yet again, didn't let me down at all. Powerhoof are the only studio that can still make me play games out of Steam. I saw their Ludum Dare entry called Snowed In and couldn't stop playing until I finished their whole portfolio. Those short games they made should be bundled up together and released on Steam for real money but I guess it's not possible since they seem to be a "dynamic" crew of mixed friends. I wouldn't be surprised if they were not able to say where the copyrights lie with most of their small titles.


Last edited by cprn on 9 July 2019 at 7:54 pm UTC
3 Likes, Who?
While you're here, please consider supporting GamingOnLinux on: