Valve moves on from OpenVR, goes all-in with OpenXR for SteamVR

Recently, Valve released a new SteamVR Beta that was aimed at developers with initial support for the OpenXR specification and it appears they're going all-in.

We've been wondering how Valve would be proceeding since then and they've now announced their further plans in a blog post titled "Transitioning To OpenXR". Currently, the Valve-made OpenVR is the default API and SDK for SteamVR but that's about to change. 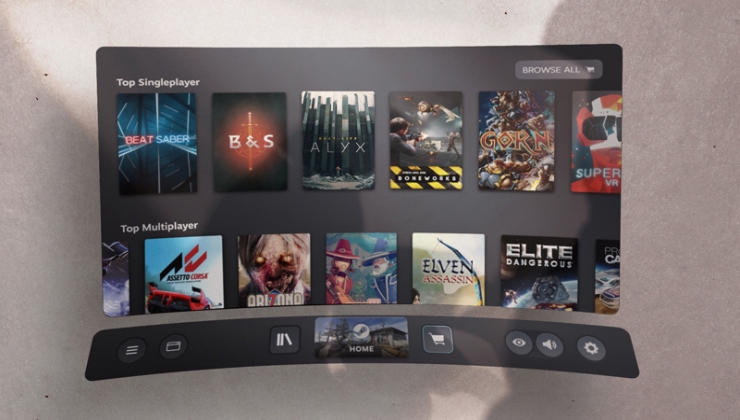 In the post they mentioned the challenges VR faces with developers needing to target multiple SDKs, this is what OpenXR is supposed to solve. An open standard run by The Khronos Group who also oversee OpenGL, Vulkan and other APIs. OpenXR also has the backing of a lot of companies including AMD, ARM, Epic, Facebook, Google, HTC, Microsoft, NVIDIA, Qualcomm, Unity, Valve, and many more.

Valve have said they now expect new SteamVR features to appear on the OpenXR side, rather than through OpenVR. However, OpenVR designed apps will continue working as normal but the future is clearly with OpenXR. Valve themselves worked closely with others to help develop OpenXR too, so it makes a lot of sense for Valve to want to move away from their own API and onto a proper standard and this is a good thing for the health and future of VR.

If you're a VR enthusiast, what do you think to this?

View PC info
Yes! This feels like a huge win. Valve are staving off the whole OpenGL vs D3D battle in VR land before it even has legs. Great news to see such a big leader in VR take the open plunge so early. This can only be a positive move.
8 Likes, Who?
Zlopez 25 Jun, 2020

OpenXR is amazing project, it's great to see it adopted by big company like Valve.
4 Likes, Who?

View PC info
Sounds like good news :D
Lets hope thats the reason that SteamVR on linux seems to kind of stand still with longstanding big issues like power management (lighthouse not powering down), Dashboard not working, fix async reprojection and so on.

View PC info
Nice. Are they going to use Monado too for the actual implementation? And what exactly are they using now for OpenXR runtime, their own blob?

View PC info
Now developers can just target OpenXR instead of having to maintain both SteamVR (OpenVR) and Oculus (OVR) modes. It should make cross compatibility between standalone headsets much better as well because right now they all use their own apis.
0 Likes

Quoting: ShmerlNice. Are they going to use Monado too for the actual implementation? And what exactly are they using now for OpenXR runtime, their own blob?

I've seen you ask this before so I'll answer: no they are not using Monado and Monado still has a long way to go. If they do end up using it, you can be sure it will see an article.
3 Likes, Who?

It's something I'd expect them to get behind like they did with Mesa (radv, aco etc.). Or they are already doing it just not using in the actual client yet?
0 Likes

View PC info
Speculation: They bet on all the race horses and once the winner emerges they narrow their bets. VR is emerging technology.

Very exciting to see OpenXR developments, It's going to be a exciting year for VR @ Valve & hopefully VR @ Linux too.
1 Likes, Who?
mike456 26 Jun, 2020
I'll get a HP Reverb G2 in fall and hope it will work also on Ubuntu/X-Plane. OpenXR sounds good but if it's also needing Monado...oh well. I don't expect anything from HP, they even told me, while I still had warranty on my laptop, to buy a new motherboard as I forgot the bios password! So no more HP laptop for me and I would also happily dismiss G2 if competition would arise. Index is to expensive and low resolution. What headsets are working in Linux/steamvr apart Index?
0 Likes
Purple Library Guy 26 Jun, 2020

Quoting: mike456I'll get a HP Reverb G2 in fall and hope it will work also on Ubuntu/X-Plane. OpenXR sounds good but if it's also needing Monado...oh well.

2 Likes, Who?
1/2»
While you're here, please consider supporting GamingOnLinux on: