Valheim is just an incredible experience you need to play

Why is Valheim so popular? People have asked. Well, how we feel about games is always highly subjective and here's my own initial thoughts on it after many hours lost inside its world. Note: key provided by the publisher.

For me, it's honestly like the first time I discovered and played Minecraft. Seriously, it's just that good. As someone who regularly burns out on games, it's just been that transformative of an experience. It's not trying to be realistic but it has a coherent and good-looking style, mixed with some absolutely fantastic lighting, it's a gosh darn pleasure to run around in. It blends together the ability to be seriously creative with building like Terraria and Minecraft, and there's been some ridiculously amazing stuff out there, along with combat that's actually quite challenging.

Valheim isn't perfect by any measure, it's still in Early Access and so issues are to be expected but it's got so many things right that other games don't necessarily get wrong but Valheim just does better. There's a hunger system for example but it doesn't kill you only make you weaker. Get a bunch of food, eat up and see your maximum health and stamina increase but you can't die from a lack of it. You also don't need to worry about drinking water. So it's survival game, that doesn't force you to survive in the normal sense. 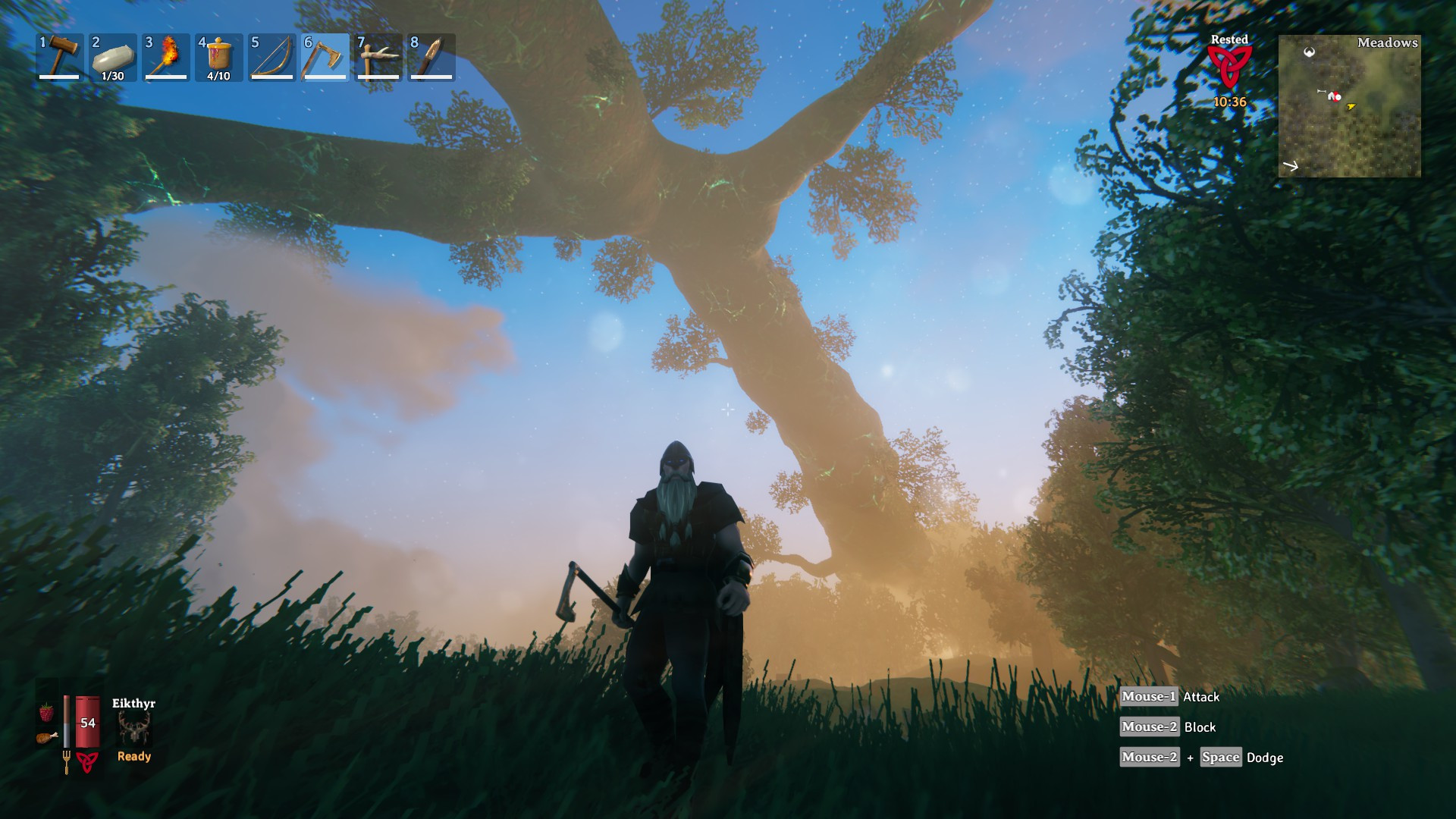 How items work is a great too. There is a durability system but items don't break and vanish, you just can't use them until you get to repair them at the correct station - which is free to do. Valheim pushed over a lot of the barriers that many survival games put up and it makes it less frustrating. There are frustrations though! No game is complete without them. The items you use level up your skills the more you use them. Oh, did you die? Say goodbye to some of your skill levels.

There's plenty it takes from other stalwarts of the survival genre too though, like progress being gated behind acquiring items to unlock new crafting recipes. Boss battles are part of that progression system too, as you need to defeat each of them to gain certain items that I won't spoil here. Boss battles can be repeated as well, so you can get plenty of what you need and if you enjoy the battles you can keep doing them.

Feeling creative? The building system can be a little tricky to get right but it offers up a lot of ways to create really awesome buildings and all sorts of craziness. Objects can snap together for a proper fit but you don't have to build like that, you can free-form build to get things exactly where you want them and positions objects snug around others. You even need to take structural integrity into account, objects can't just float and stay up - they will break.

Building a nice house isn't just for fun though, it's needed because of the bonuses you get from it. Make a good home, your comfort level goes up which will then boost your Rested status which gives you buffs to both Health and Stamina regeneration.

The world is absolutely massive too, after 30 hours in we had explored so little of it and constantly discovered new things.

Valheim is as exciting as it is terrifying at times too. There you are just casually mining some copper, when you hear a sudden thud and turn around to see this staring at you: 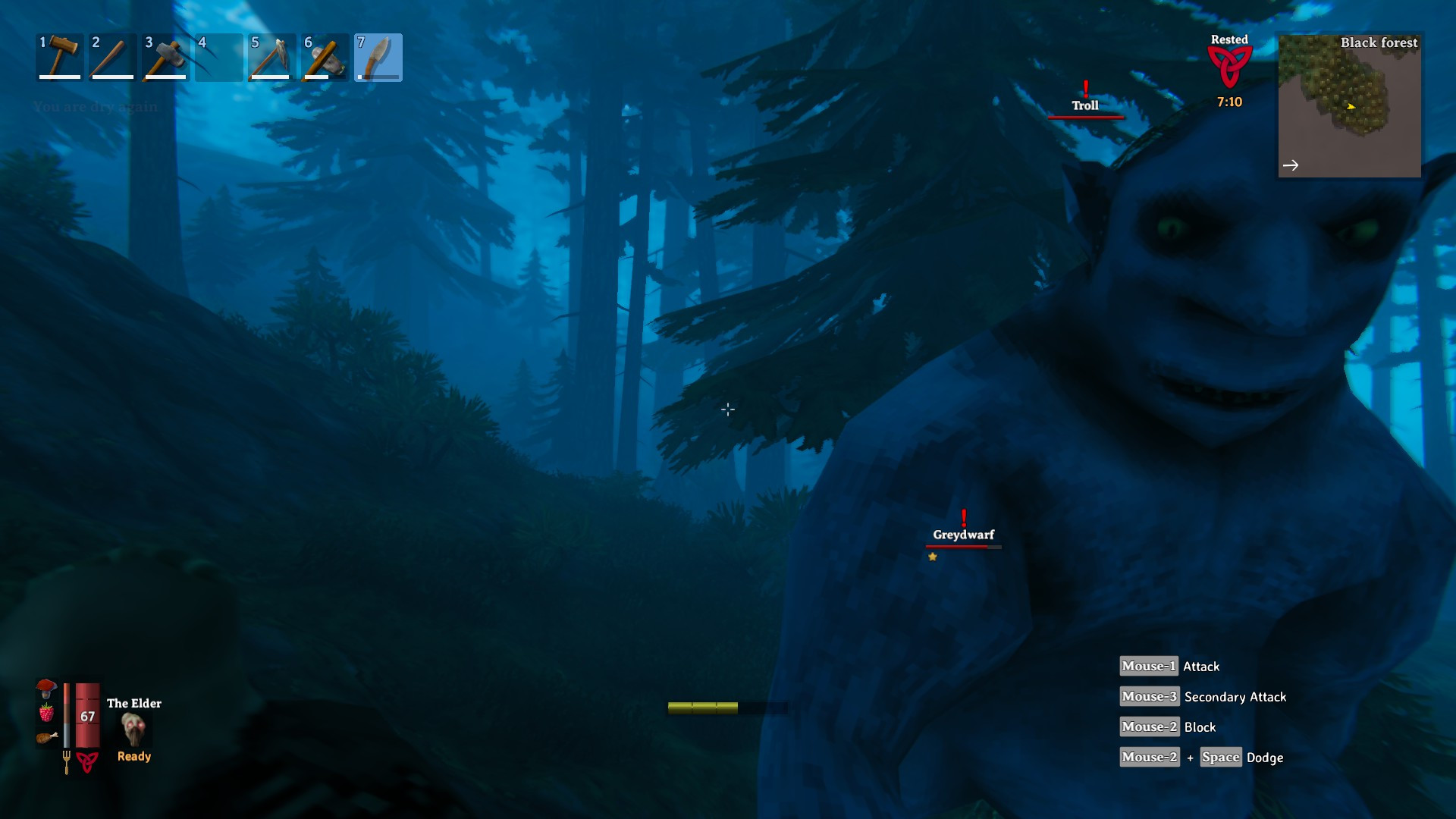 You never forget your first up-close encounter with Troll kind.

The design work on the creatures is just fantastic too. Trolls are huge and they actually feel huge too, they can throw big rocks and smash around, some of them carry around a huge log to smash with too. Combat with the different creatures needs actual thought into it, you can't just button-mash your way to success with the majority of them. Think you've spotted a lone Wolf and think you can take it on? Fire an arrow, jokes on you — there was two and they're really fast. Wolves are scary okay. There's also these little bastard goblin things in the Plains area that throw javelins at you, then laugh at how puny you are when they one-shot you. Yes really, they will laugh at you, I would know as I died 10 times in a row to 2 of them just recently…they also destroyed my boat. Woe is me.

Valheim is quite playful too in a few ways too, it's not an overly serious game which is again a highlight. Your bee hive will tell you "The bees are happy", meat tells you to cook it for "a tasty treat", put the head of a beaten boss on your house and it will talk to you now and then, a bronze axe is "curved like a smile" and it wishes you a good morning when you wake up from a nap.

For those curious, it's just as absorbing to play it solo as it is in co-op with others, at least I found myself happily enjoying it either way. 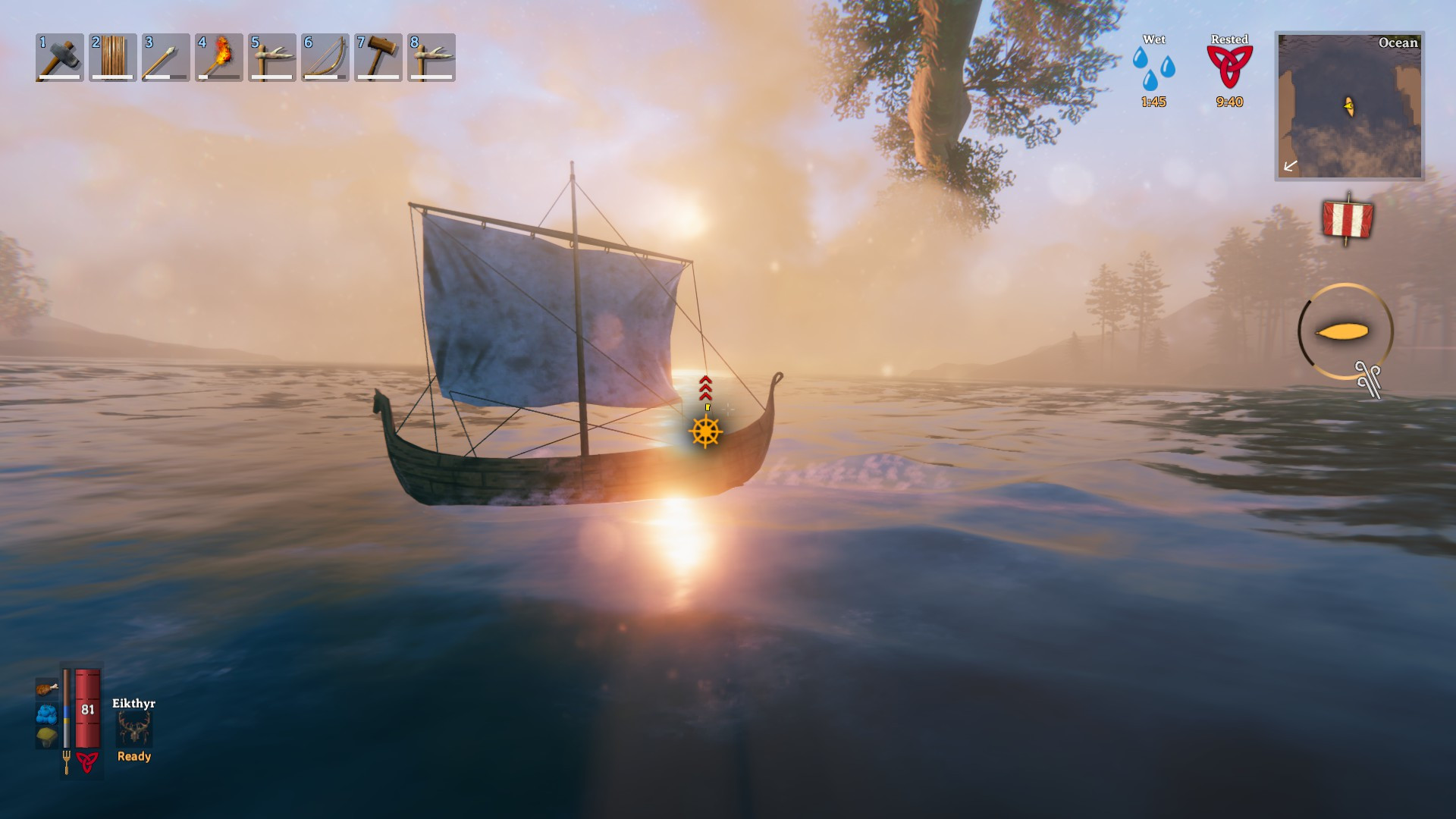 Everything in the world of Valheim fits snugly together with the crafting, the building, the Souls-like combat, the exploration and discovery. Most importantly though, Valheim just makes it feel like you're going on actual adventures. Something we could all do with a little more of. Once you get the first proper boat (the raft is a bit rubbish), things really open up too as it's pretty fast across the water.

Considering they've sold multiple millions, hopefully we can expect the team to just keep on expanding the world. Buy Valheim on the Humble Store or Steam.

About the author - Liam Dawe
I am the owner of GamingOnLinux. After discovering Linux back in the days of Mandrake in 2003, I constantly came back to check on the progress of Linux until Ubuntu appeared on the scene and it helped me to really love it. You can reach me easily by emailing GamingOnLinux directly.
See more from me
Some you may have missed, popular articles from the last month:
The comments on this article are closed.
41 comments
Page: 1/5»

[email protected] 16 Mar, 2021
View PC info
Congrats to Valheim devs for the success. Five million sold games in a month and a half is the dream of any indie developer. And to know it was developed by Linux guys, is just a little thing that any Linux enthusiast could be proud off.
17 Likes, Who?

View PC info
Yeah yeah, okay okay... I'll finally buy it :D
Have been looking at it for quite a while, and just for the native Linux support I wanted to support the devs.
But I have no idea when I'm going to play it, so I was hesitating. Well, not anymore. It's bought. Thanks -.-

Advertisement? Sorry, but I won't buy this game. Still thinking, that it's not worth trying at current stage.
0 Likes

View PC info
I just picked this up off Steam last night. Haven't had a chance to play yet, but it looks like fun.
0 Likes

Quoting: DMGAdvertisement? Sorry, but I won't buy this game. Still thinking, that it's not worth trying at current stage.

Oh, it really is. As Liam says, it's not perfect - for me, the inventory system feels a bit fiddly, and I can't quite put my finger on why - but I've seen plenty of final releases that feel less “finished” than this.
1 Likes, Who?

View PC info
took me 125 hours to beat the final boss, worth it, every minute of it was... Such a good game, what it makes it great for me, is that, it's massive the world is sooo big that u never explored everything, and it's also very random, so it always feels like you are visiting a place that you were never before . And how the game progress is very smooth, how you unlock weapons and technology to defeat the next boss seems a very well thought difficulty curve. In some sort of way is like adaptative because if you can't kill a boss you can resort to like over powering your character leveling up (leveling up does take a lot of effort in the final stages) but it's sort of a flexible system.
I played in co-op with sometimes three but mostly with two players, I know friends that are taking their sweet time and playing in solo that probably are going to take like 200 hours to get to defeat the final boss, so that's also one thing to take in consideration, if you play on solo the game is considerably more difficult and longer than playing in co-op.
Personally I would recommend playing this game in co-op is much more fun and sort of the right difficulty level for me.

Not sure what you're asking. Is this an advert? No. I enjoy it, I wrote about it. These are my thoughts on it.
17 Likes, Who?

I've got 250 hours into this game and I'm basically at the point where the only thing left to do is explore, farm, and build. This is easily my favorite game from the last few years and it's not even close.

That being said I'm a little sad to see that a new world may be required for new content but then again it's an early access game and characters transfer between worlds easy enough. I'm going to be sad if I have to leave my rather elaborate plains farming complex behind but I'm sure whatever new content this game has to offer will be worth it.
3 Likes, Who?

Used to enjoy spending many hours in 'The Long Dark', surviving, exploring and simply enjoying the landscape.
3 Likes, Who?

Indeed it is a stellar experience, it evokes so many feelings I have long missed from games.
3 Likes, Who?
1/5»
While you're here, please consider supporting GamingOnLinux on: