Humble Bundle announced back in April they would be making changes to the purchase sliders based on (much hated) testing, then backpedaling in May, they've announced again some changes are coming to always give Humble a cut.

Previously when buying a bundle you would be able to adjust the sliders of who gets a cut, to give 100% to charity if you wish (or developers/partners) and you could even give nothing to Humble. That's going away. The sliders themselves this time will continue to be an option, so you will be able to adjust who gets what. However, Humble have made it clear they will always have a minimum cut between "15 – 30%". This brings them more inline with other stores but it does mean it's far less generous to charity and developers. 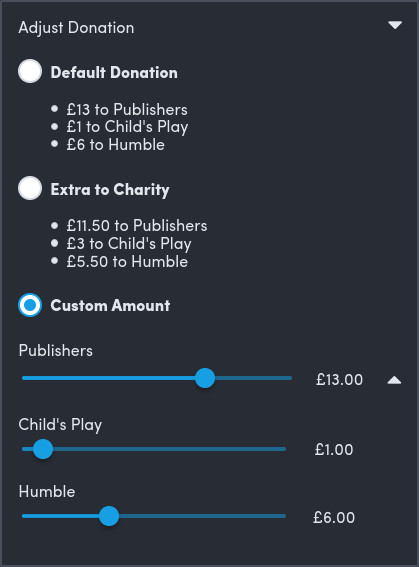 Pictured - the current sliders on bundles.

This change comes after 10 years of Humble allowing people to give them nothing. To play "devil's advocate" for a moment: it's not even remotely surprising they want to do this though, they are a business and they do obviously want to always be able to pull in money from customers, they aren't a charity themselves. However, after enabling full customization for this long, it's obviously still not going to go down well with a large portion of their customer base.

Explaining why they're doing it now, Humble said "The PC storefront landscape has changed significantly since we first launched bundles in 2010, and we have to continue to evolve with it to stay on mission. The update will allow us to continue to offer great prices on amazing games, books and software all while supporting important charitable initiatives with every single purchase" and that the change will allow them to invest more in their content. They also noted they're closing in on $200 million in donations to various charities.

In an email with Kotaku, Humble boss Alan Patmore said "Operational costs, such as the cost of acquiring content, have risen dramatically" which is one of the reasons why they're doing this.

QuoteThis change comes after 10 years of Humble allowing people to give them nothing. To play "devil's advocate" for a moment it's not even remotely surprising they want to do this though, they are a business and they do obviously want to always be able to pull in money from customers

The writing was on the wall when the site got sold to ign. That it is not surprising only emphasises the dubious ethics of the original owners selling their costumer base in this manner.
4 Likes, Who?

View PC info
it won't be long before there gone,there constantly back peddling.this is not the same humble bundle that had awesome bundles.
4 Likes, Who?

View PC info
I'm going to play devils advocate here...
I honestly do not see anything wrong with Humble wanting to get some money from their bundles. I'm sure they're doing quite well outside the bundles, as they're still alive. That said, even if Humble was an actual non-profit (which, as far as I can tell, they are not) it's still expected the organization gets paid.

I still like some of their (non-game) bundles. I especially like the (game-dev oriented) art and audio bundles they often have.

I'm not claiming they're a perfect company or that they're even totally above board in all their decisions... but, they're no worse than GOG, Steam, or Epic, and wanting some kind of compensation from their bundles isn't an obscene ask.
3 Likes, Who?

Quoting: ObsidianBlkI'm going to play devils advocate here...
I honestly do not see anything wrong with Humble wanting to get some money from their bundles.

Agreed, but I'm surprised by the numbers. It's not like the current market they're talking about is going up to 30% at the moment. I expected less than 10% as their minimum part.
3 Likes, Who?

View PC info
After I had a problem getting a refund on a game I purchased from a 3rd party, I'm pretty leery to buy Steam keys outside of the Steam store itself. I don't return games much at all, but this one didn't even work on my computer. So when I buy Steam games on Humble, I only do so after accepting the risk.
0 Likes

QuoteHumble boss Alan Patmore said "Operational costs, such as the cost of acquiring content, have risen dramatically" which is one of the reasons why they're doing this.

Sounds to me like Epic is at fault for that given the sums they have offered for their give-away titles.
0 Likes

View PC info
I deleted my account awhile back when they first did that switch-n-bait with the bundle payouts. I backed up the only game I did not have else in DRM FREE format which was Skullgirls and kept it moving.
0 Likes
Beemer 2 Jul, 2021

Quote"Operational costs, such as the cost of acquiring content, have risen dramatically"

What content is Humble acquiring? They have a storefront where others that make content can sell their stuff. I know occasionally in the past, they've paid to have something ported. Does Humble Bundle make games or other content for sale now?

Anyways - This is a wholly unexpected development.

Quote"exploring different approaches to the sliders and how splits work, along with new ways to incorporate charity into other parts of the user experience"

This is PR speak. They made a change they thought or hoped no one would either notice or care about, with the express purpose of forcefully increasing their profits per bundle sale.

IGN is only backtracking now because people did notice and did care and IGN figures they will lose more than they stood to gain if they kept the changes.

The quoted statement is completely unnecessary in the context of the original sliders, which give buyers complete choice on how the money they spend is split. Which of course could mean, for any given buyer, $0.00 for IGN.

The quote is only valid if they want to limit buyer choice in the sliders in the future, ostensibly to ensure a minimum percentage cut per sale. My gut tells me they'll either wait a bit, then re-introduce with some made-up back story as to why it's necessary (a story they don't have currently) OR, they will try to sneak the changes via smaller incremental ones.

(quote edited for spelling and highlighting)
1 Likes, Who?

WildCoder 2 Jul, 2021
When the default is 6 times more to Humble than to Charity, maybe now would also be a good time for them to drop the word "Humble" from their name.
3 Likes, Who?
Purple Library Guy 2 Jul, 2021
I suspect that what's going on here is partly that Humble isn't perceived the same way by its customers any more. In the early days of Humble Bundles, Humble was seen as this broke, ahem, "humble", little underdog practically doing a public service. So, if you went to buy a Humble Bundle, you'd naturally want to send some money their way, in the same way you'd naturally want to give some money to the charity.

At the same time, I'm not going to go out of my way to shop Humble based on the notion that they're a good guy underdog, because they no longer are.