Some games live on forever and that's very much the case with Zork, a true classic interactive fiction adventure from 1980 and thanks to Ryan "Icculus" Gordon there's also now MultiZork.

In a post on Patreon, Icculus gives a brief history of their love for Zork, a game that "not only uses its own programming language, it uses its own CPU" and so it's been made to run practically everywhere. As long as a system had a working Z-Machine emulator it would work, and that was needed as this was back in the days where there wasn't much of a standard for PC systems. All it needs is a working text interface and so you can play it across so many places.

For fun Icculus wrote MojoZork, a "single C file that is just enough of the Z-Machine to complete Zork 1 (and probably several other early Infocom games)" and it seems due to the way it was made there's just enough room to squeeze in a couple of extra players and so that's what Icculus did.

There were quite a few steps needed to enable Zork to work as a multiplayer game that I won't quote all of, but the end result is that you can now have several people try to complete Zork together. Although there's times it doesn't quite work:

There are places where this whole concept is janky, and in the spirit of a game that can be merciless about allowing you to make it unwinnable, I decided not to work around them. There are not enough light sources for four players in a universe where darkness equals death, or someone could be holding a crucial object and disconnect, leaving it frozen to their immobile body until they return...if they return. There are possible solutions to fix these concerns, but one could also just make the game unwinnable without warning by eating the garlic seven moves in, so for now I’m hoping this produces the occasional hilarious disaster; for example, the troll might kill the player that has the sword and lamp, scattering him and his belongings in the forest above ground, leaving everyone else in the room defenseless against the troll and unable to flee because of the grues. They’ll be joining him above ground shortly. 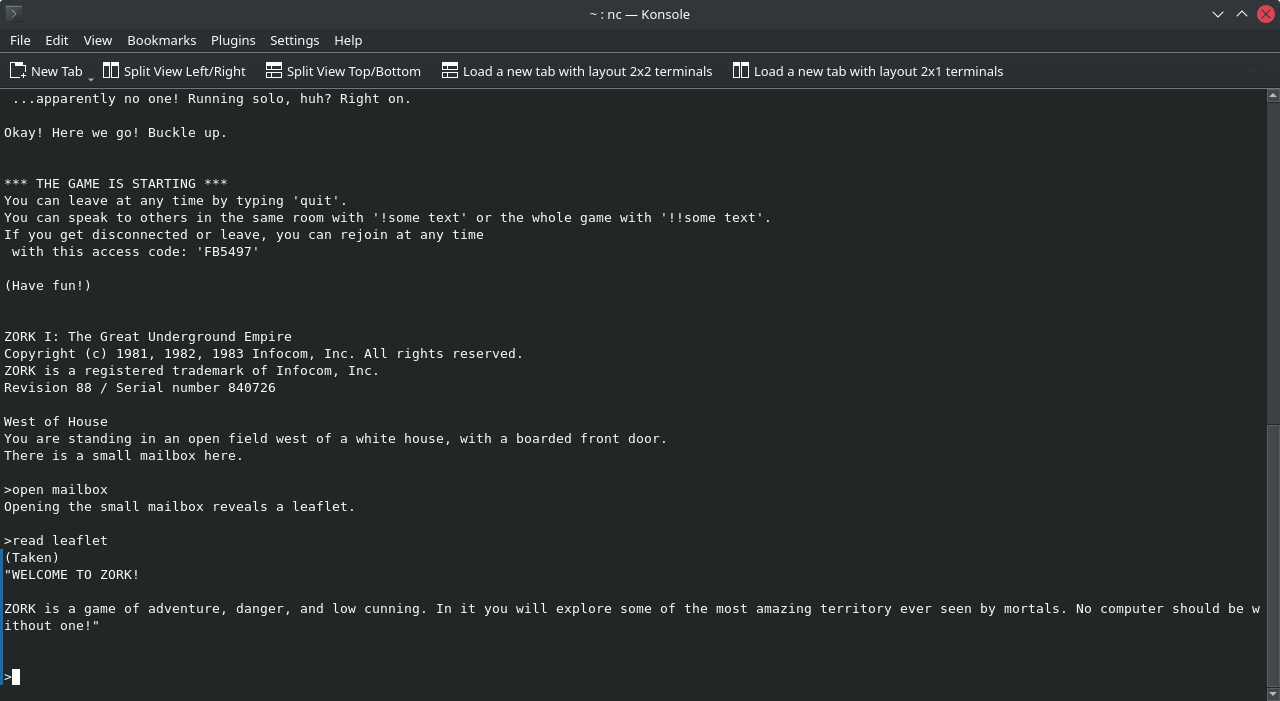 You can try it out using telnet, which should just work in terminal with this command nc multizork.icculus.org 23 and from there you're put right into Zork with MultiZork. You can start a new game and get a code to give to others, or jump into an existing game with a code. You can also just play it solo right there if you wish.

Do read the Patreon post for the rather interesting full explanation and the code is on GitHub.

QuoteSome games live on forever and that's very much the case with Zork, a true classic interactive fiction adventure from 1980 and thanks to Ryan "Icculus" Gordon there's also now MultiZork.

I didn't have the chance to play Zork as a kid, but I did it for the first time some years ago. It's a unique experience that I recommend. Now you can do it on Linux exclusive multiplayer!

I mean the server is exclusive, according to the readme:


Quote...there is a telnet server called multizorkd...This probably only works on Linux/Unix systems...