Good news for fans of the tiny Raspberry Pi 4 Model B, as it has been announced that the v3dv Mesa driver has hit Vulkan 1.1 conformance officially now.

Shared on the Raspberry Pi website, with a post from Igalia’s Iago Toral they mention that it's been almost a year since the driver officially hit Vulkan 1.0 so it's great to see it continue to advance. In the post they noted that all the required changes are already merged in the upstream Mesa project. This means it will be available officially with the next major Mesa release later this year (Mesa 21.3).

In addition to Vulkan 1.1 support they've also implemented support for geometry shaders, which was previously only in the OpenGL ES driver and more optional Vulkan features and extensions. More work also went into their shader compiler, resulting in "significant" performance improvements for games and apps with expensive shading for both the OpenGL and Vulkan drivers which should help stuff made with Unreal Engine 4. However, it's also noted that Unreal Engine 4 is "quite expensive" so don't expect playable performance for much. 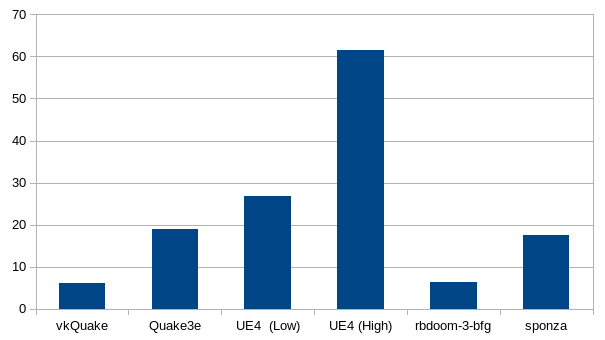 Performance improvements (in %) across various Vulkan games and demos

Support for RenderDoc and GFXReconstruct was also improved, and they said "very excited to continue improving Vulkan support for Raspberry Pi devices in the future, so stay tuned for future news".

Hopefully with all this advanced work in place, once a new model eventually comes out, a lot of code could probably be reused reducing the bring-up time.

Solarwing 31 Oct, 2021
Good work so far.I own Raspberry Pi 4 with 8 mb RAM but I haven't tested it yet properly.There is Ubuntu 21.04 in it atm. Still it lacks proper software support in my opinion.For example some programs in ubuntu don't work yet so there is room for improvement.But does anyone here have any experience of using Rasp4 for playing?I'd like to know...