A fresh month, which means a new Steam Hardware & Software Survey is out. Looking over the October 2022 data, it appears we've hit a fresh high point.

At the end of October, Linux hit 1.28% on Steam against 2.23% on macOS and 96.50% on Windows. Going by our Steam Tracker, where we've been tracking the Linux user share for a few years, it is the highest it's been in over 4 years now! Still tiny compared with Windows of course but it's some clear steady progress.

This growth at the moment is largely thanks to the Steam Deck, which you probably already guessed. That much is clear when looking over the Linux-specific data page on the Steam Survey which shows these as the top Linux distributions:

SteamOS (at least going by that list on face value) is the most popular Linux distribution for gamers on Steam, by a wide margin there too with the caveat being we don't know exactly what's in the "Other" category, which could be full of various forms of Ubuntu that could push it to the top when added together.

When checking further, in the GPU list for Linux, the growth is clear with it noting that "AMD Custom GPU 0405" (the Steam Deck) has hit 25.01% (+7.94%). I should note as well, that this GPU still doesn't even show up when filtering to just Windows and so it's clear that the vast majority of gamers on Steam Deck are sticking to SteamOS which goes to show just how good it is as an experience overall. 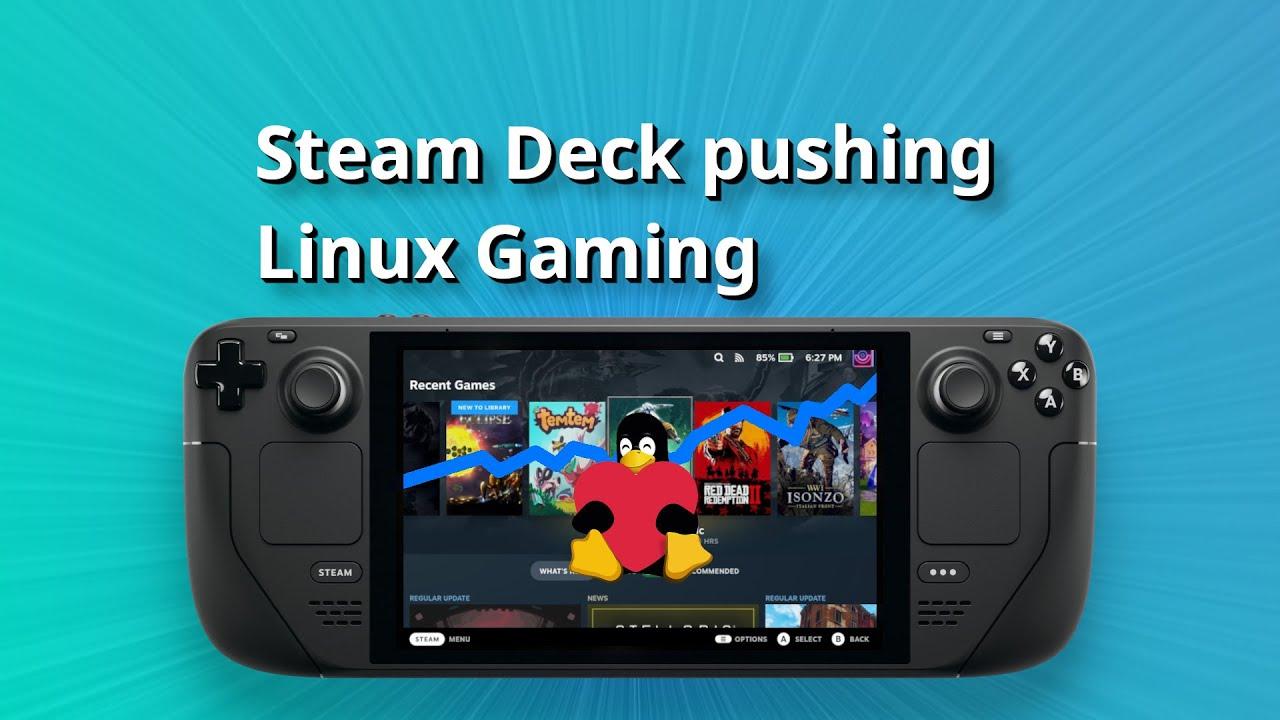 About the author - Liam Dawe
I am the owner of GamingOnLinux. After discovering Linux back in the days of Mandrake in 2003, I constantly came back to check on the progress of Linux until Ubuntu appeared on the scene and it helped me to really love it. You can reach me easily by emailing GamingOnLinux directly.
See more from me
Some you may have missed, popular articles from the last month:
40 comments
Page: 1/4»

View PC info
It's interesting to see how this is turning out over time. I was a Mac user between 2004 and 2008, and the gaming situation (and, as far as I know, percentage) on Mac OS X back then was similar to how it is on Linux now, if not a bit worse - but with even more fighting tooth-and-nail for native game support, because there wasn't a tool like Proton! Having been there for that, I can't help but feel that we've got it pretty good on Linux these days.

Quoting: PenglingIt's interesting to see how this is turning out over time. I was a Mac user between 2004 and 2008, and the gaming situation (and, as far as I know, percentage) on Mac OS X back then was similar to how it is on Linux now, if not a bit worse...

The difference is that there went a lot of work into making Linux a gaming platform. Whereas Apple keeps undermining their platform. MacOS is the only mainstream platform where Vulkan is not supported, and OpenGL is stuck on version 4.1 (2010), so you are forced to use their proprietary Metal API. Switch to ARM processors is objectively not a bad thing, but it does make the burden of supporting games on macOS even worse, especially when taking into account old games. Not to mention the hostile licensing to even be allowed to develop anything on macOS.
9 Likes, Who?

View PC info
It's also the seventh month with shares above the long term trend line. It might be worth to draw two trend lines: one before the release of Steam Deck and another after the release - this might give better predictions for the future.

OTH, we had a strong growth over most of 2021, followed by a collapse in early 2022, so maybe half a year is too short to play around with trends.
5 Likes, Who?

View PC info
I was a bit surprised when i got the hardware survey prompt on my deck. Somehow would have thought they don't need the survey they... ^^
4 Likes, Who?

And how bad of an experience Windows is.

SteamOS is pretty good (not perfect at all tho), but honestly, it would have to be pretty damn bad for Windows to be the better option.
Windows is fine on desktops, but on touch devices and even more so on handheld devices such as the Deck (gamepad + touch) it just doesn't cut it.

Lightkey 2 Nov
View PC info
It's worth looking at the last graph on the Steam Tracker page again. For English-only users, it was the biggest jump yet, by 0.46 points. The reason why this translated to such a small 0.05 point gain overall is because as the second graph shows, Simplified Chinese users (where Linux usage is near zero) also had a huge spike from 26 % to 32 %, the highest yet.
4 Likes, Who?

View PC info
The climax may be reached in the next couples of years when 1/ microsoft will end its low-cost key politics to fight against piracy and 2/ if they really make the new incoming windows with yearly or monthly subscription, as they have begun with Office and as rumor says about this next windows '12'?
1 Likes, Who?

Quoting: Geppeto35The climax may be reached in the next couples of years when 1/ microsoft will end its low-cost key politics to fight against piracy and 2/ if they really make the new incoming windows with yearly or monthly subscription, as they have begun with Office and as rumor says about this next windows '12'?

I'm so glad, I don't need Windows any more, even for work. :)
Yet there have been so many things Microsoft did that made us think people would migrate to Linux... it sadly never really happened. 3rd party support, MS Office and laziness...
1 Likes, Who?
1/4»
While you're here, please consider supporting GamingOnLinux on: