I spoke with a developer of ANTRAXX [Official Site, Kickstarter] a little while ago when they were considering full Linux support, now they have launched their Kickstarter for their online mech battler and Linux is a go. 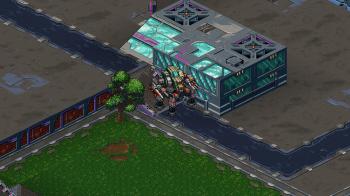 Mechs are apparently customizable with collectable parts and weapons, it also has a map editor.

It has a handy in-browser demo, but sadly it doesn't let me play. Every time I click a game it just disconnects me which is a shame. I was hoping to write a few brief thoughts on this one. This is the same issue I told them I had back in July, so it's a shame to see it still not fixed months later when their Kickstarter has launched, doesn't fill me with a lot of confidence.

If I'm going to be honest as I can, It's hard to write anything interesting about a crowdfunding game when a demo is offered that hasn't worked for 3+ months.

The developers are looking to get €30,000 and they have a long way to go, but hopefully this fun looking mech shooter will prevail.

Article taken from GamingOnLinux.com.
Tags: Action, Crowdfunding, Indie Game, MMO
0 Likes
We do often include affiliate links to earn us some pennies. We are currently affiliated with GOG and Humble Store. See more here.
About the author - Liam Dawe

I am the owner of GamingOnLinux. After discovering Linux back in the days of Mandrake in 2003, I constantly came back to check on the progress of Linux until Ubuntu appeared on the scene and it helped me to really love it. You can reach me easily by emailing GamingOnLinux directly.
See more from me
Some you may have missed, popular articles from the last month:
The comments on this article are closed.
1 comment
info@antraxx.com 4 Oct, 2016
Hello Liam,

Thanks for the announcement about our Kickstarter.
I've sent you a e-mail with a invite to our discord link.

If you get on our Discord we can track down the bug that is happening to you.
0 Likes
While you're here, please consider supporting GamingOnLinux on: