UPDATE: The developer provided some clarifications here. I think the key point to take away is this "Last but not least, we are shelving the Linux port, not outright killing it. This doesn't mean we won't do it after the launch."

ORIGINAL: Book of Demons [Steam], a dungeon crawling hack and slash with deck-building will no longer get a native Linux port. Steam Play is part of the reason. 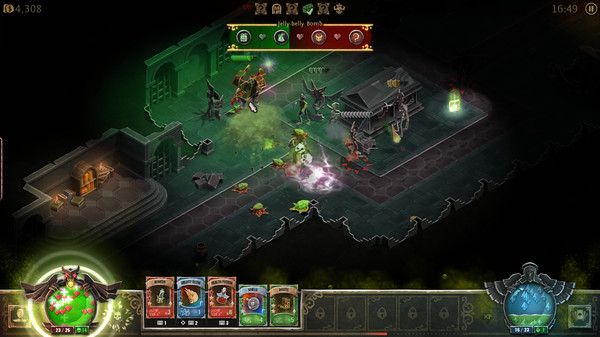 It won't be the last game to do this I'm sure. At least in this case, they aren't pulling support for an already released game like Human: Fall Flat as Book of Demons didn't have a public Linux version. Anyway, writing on the Steam forum the developer noted a few vague issues they were having.

Things like "We had as many different issues with the build as testers. With each flavor of Linux came different issues." along with "Right now everything indicates that Linux port would be very high maintenance.". I always find these types of statements highly unhelpful, unless they actually say why that is. Let's be clear on this again too, you do not need to support all Linux distributions, support the most popular.

They went on to mention the issue of users only getting a single choice between Native or Proton, since Steam has no built-in way of picking between Steam Play or a Native build. An issue that seems to be mentioned more lately by gamers and developers. So, they said they will "focus our efforts on supporting Steam Play and Proton.".;

This does bring up some interesting thoughts. To be clear, I'm very open minded about Steam Play especially since sales will still show up as Linux and that I do like.

However, there's a lot that's unclear right now. When developers say they will support Steam Play/Proton, how will they do that? It would at the very least, require them to test every single patch they do on a Linux system through Steam Play to ensure they haven't broken it. Anything less than that and I wouldn't say they were actually supporting it. If it is broken, finding out why might end up being a hassle and hold them back and end up causing more issues. They can't really guarantee any degree of support since it is Valve and co handling it for them, the way I see it is that the game developer is not really doing anything.

We do often include affiliate links to earn us some pennies. We are currently affiliated with GOG and Humble Store. See more here.
About the author - Liam Dawe
I am the owner of GamingOnLinux. After discovering Linux back in the days of Mandrake in 2003, I constantly came back to check on the progress of Linux until Ubuntu appeared on the scene and it helped me to really love it. You can reach me easily by emailing GamingOnLinux directly.
See more from me
Some you may have missed, popular articles from the last month:
The comments on this article are closed.
63 comments
Page: 1/7»

View PC info
... And this is exactly what the pessimists were worried about.
27 Likes, Who?

Quoting: Beamboom... And this is exactly what the pessimists were worried about.

If they can get Linux support basically for free they'd sure go for it. Especially if they don't have any personal feelings for Linux and FOSS in general (I'm not judging of course). So yeah, it's not good but considering the market share it's much better than nothing. And if they see any significant Linux share, they might reconsider.
9 Likes, Who?

QuoteIt would at the very least, require them to test every single patch they do on a Linux system through Steam Play to ensure they haven't broken it. Anything less than that and I wouldn't say they were actually supporting it.

This. If they are agreeing to "support" it, they must be willing to field bug reports from users.

Other than this, I don't have too much of a problem with this approach. It's going to be good in some cases, terrible in other cases.

Having had the occasional Linux native game just stop working after a while, I've come to the conclusion that what I want more than anything is a library of games that keep working. So this basically means devs supporting their software one way or another.
7 Likes, Who?

Quoting: PatolaIn theory, yes, they should only support Ubuntu and SteamOS, but in practice users of different distros complain in the forums, give negative reviews and return their games as much as they have problems. So it doesn't help giving this advice, those users feel entitled to the game as much as any user of the support distributions.

This is the first time I hear about such an issue. Do you have any examples of negative reviews because the game didn't work on Arch or Gentoo? I had an impression that non-mainstream distro users (as well as most of the Linux users in general) are very eager to report the bugs and support the developers in their quest. And the reports come quite detailed also. If the game still doesn't work, they're usually quite understanding.
8 Likes, Who?

View PC info
Linux is sort of on the bleeding edge, always changing and a bunch of experimentation going on. Perhaps when Linux has a larger market share and one particular distro rises to the occasion the platform will be more stable and easier for developers to support. Though if that were to occur I think Linux would ultimately be worse off as it probably be slower to progress in performance and design to maintain legacy support and whatnot.
0 Likes

View PC info
Gotta be honest, as long as I can play the game on my system without having to worry about a Windows partition or mucking about with Wine, I am happy.
2 Likes, Who?

And WHO excatly told them to support EVERY flavor? Just support Steam OS and/or Ubuntu. And for the most part it will work on any Distro.

Quoting: GuestMost people who pretend that "Everything is fine", are casuals who only use vanilla versions of Ubuntu/SteamOS, possibly even outdated versions...

Damn casuals, they ruin everything.
7 Likes, Who?
1/7»
While you're here, please consider supporting GamingOnLinux on: