Google are starting to boost their library of games for Stadia, with Borderlands 3 and Dragon Ball Xenoverse 2 now available. Tom Clancy’s Ghost Recon Breakpoint will also be launching, although not until tomorrow December 18th but it comes with something extra. 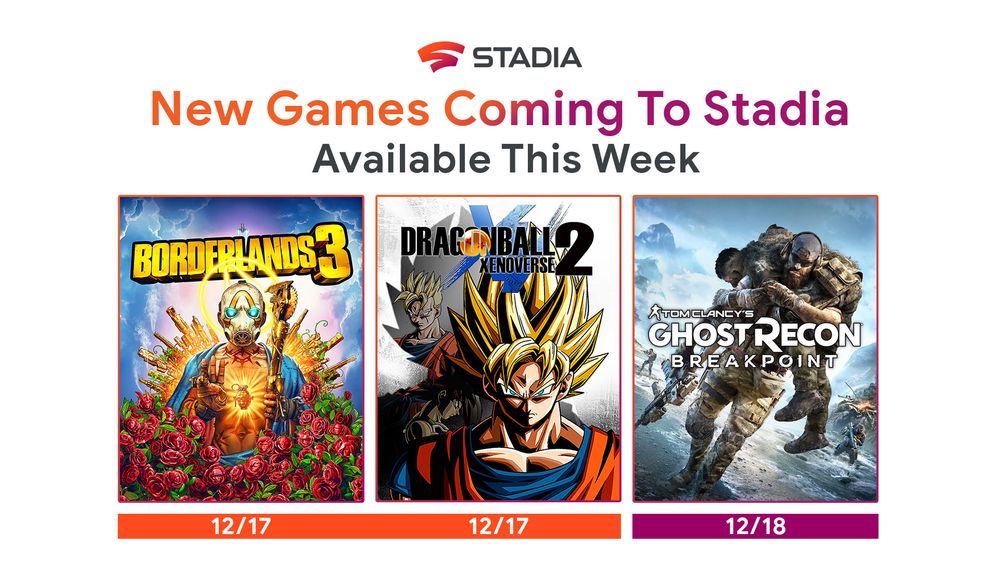 Ghost Recon Breakpoint seems to be the first title on Stadia to use their very interesting Stream Connect feature. This is where you team up with others, and actually see their screen on yours at the same time in a box and it supports doing that for "up to three teammates". That's one of the reasons why Stadia is interesting, the extra processing power to do special things like that (more info). However, Breakpoint reviewed pretty badly overall, so probably not the best test-case for it.

Today, they also put up some discounts on other games for Stadia Pro (pretty much everyone right now) like 60% off the new GRID, which has a Stadia exclusive Endurance Mode with 40 racers.

As a reminder, Stadia works very well on Linux in our testing. With either Chromium or Chrome (and other browsers with some tinkering). You can see our first impressions here and a full Stadia on Linux livestream VOD here. Our livestreamer, Sin, will be testing Borderlands 3 on Stadia tomorrow on our Twitch Channel so be sure to follow us. We're also currently giving away one Buddy Pass.

It's going to be a lot more interesting once Stadia opens up to everyone (country access permitting) next year. Being out in the wild for anyone to load up Chromium, buy a game and play it. Once a ton of additional people get their hands on it without requiring you buy a hardware bundle—that will be Stadia's true test. Will you be trying it or are you firmly against it? Have a chat in the comments.

Article taken from GamingOnLinux.com.
Tags: Game Streaming, Google, Stadia
5 Likes, Who?
We do often include affiliate links to earn us some pennies. We are currently affiliated with GOG, Humble Store and Paradox Interactive. See more information here.
About the author - Liam Dawe

I am the owner of GamingOnLinux. After discovering Linux back in the days of Mandrake in 2003, I constantly came back to check on the progress of Linux until Ubuntu appeared on the scene and it helped me to really love it. You can reach me easily by emailing GamingOnLinux directly.
See more from me
23 comments
Page: 1/3»

View PC info
Maybe aspyr will finally make Borderland 2 playable again?
How many months have passed since basic function of the game does not work?
3 Likes, Who?
Grifter 17 December 2019 at 7:18 pm UTC

pmatulkaMaybe aspyr will finally make Borderland 2 playable again?
How many months have passed since basic function of the game does not work?

Yeah, this is bullshit. It's been almost a year now

pmatulkaMaybe aspyr will finally make Borderland 2 playable again?
How many months have passed since basic function of the game does not work?

Yeah, this is bullshit. It's been almost a year now

I emailed them last week, no reply.
6 Likes, Who?

You know Ialwayskill when met. Sorry.A bad joke. Nevermind. I haven't tested Stadia. Maybe it's good for those who haven't a proper rig. Still I have many games in steam and my rig is good enough. So I'm not terribly interested in Stadia for now. Maybe in the next year...

Until then have fun in borderlands 3 tomorrow!

poke86Wasn't Borderlands 3 supposed to be a 6 month Epic exclusive?!

At this point we can all agree that Epic exclusives are more like a Steam veto agreement.
15 Likes, Who?

View PC info
By the way, you could own Ghost Recon "forever" on PS4 disc (and resell later) for $16 the other day.

That said, if anyone tries it out on Stadia, I'd be pretty curious. ;)
0 Likes

View PC info
Xenoverse 2 is a good game. If it wasn't Google Stadia, I'd check it out.

...Hang on, does that mean that there is a Linux version of Xenoverse 2? They should put that on Steam.
1 Likes, Who?

tmtvlXenoverse 2 is a good game. If it wasn't Google Stadia, I'd check it out.

...Hang on, does that mean that there is a Linux version of Xenoverse 2? They should put that on Steam.

While I don't have any certainty, I think that any game running on Stadia has eventually been ported to Linux+Vulkan. Unfortunately it doesn't mean devs are willing to release it for a normal Linux desktop (support costs, the usual distro difference excuse etc).
3 Likes, Who?