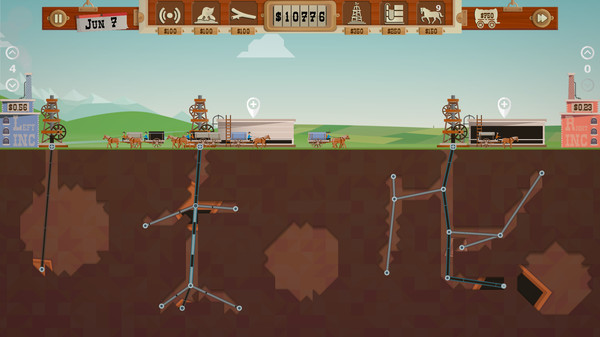 The developers of Turmoil, a simulation game about digging for oil are looking for testers using SteamOS.

We mentioned a while ago it would come to Linux and it's good to see them now moving to do it! They already have enough testers for Mac and Linux, but now they specifically need people using SteamOS.

About the game
Turmoil offers players a visually charming, tongue-in-cheek take on the simulation genre inspired by the 19th century oil rush in North America. Get a taste of the rush and rivalry of the time as you earn your way to become a successful oil entrepreneur. As you make money digging up and selling oil, the town will grow along with you.

Lease land at the town auction and search for oil. Build a rig, create an efficient pipe network and bring up the oil to store it in silos. Sell the oil at the best times to maximize profits. Then buy essential upgrades in town to cope with rock, gas and ice. Acquire more town shares than your competitors in a bid to become the new mayor. Article taken from GamingOnLinux.com.
Tags: Simulation, Steam, Strategy, Upcoming
0 Likes
We do often include affiliate links to earn us some pennies. We are currently affiliated with GOG and Humble Store. See more here.
About the author - Liam Dawe

I am the owner of GamingOnLinux. After discovering Linux back in the days of Mandrake in 2003, I constantly came back to check on the progress of Linux until Ubuntu appeared on the scene and it helped me to really love it. You can reach me easily by emailing GamingOnLinux directly.
See more from me
Some you may have missed, popular articles from the last month:
The comments on this article are closed.
3 comments
killyou 14 Jul, 2016
Greetings to all fellow Albertans! I predict this to be the most popular game in Fort McMurray.
1 Likes, Who?

Or Oil Imperium on the Amiga (also released on other platforms).
http://www.mobygames.com/game/black-gold
0 Likes
While you're here, please consider supporting GamingOnLinux on: