Digging for riches and falling onto spikes in SteamWorld Dig 2, now available for Linux 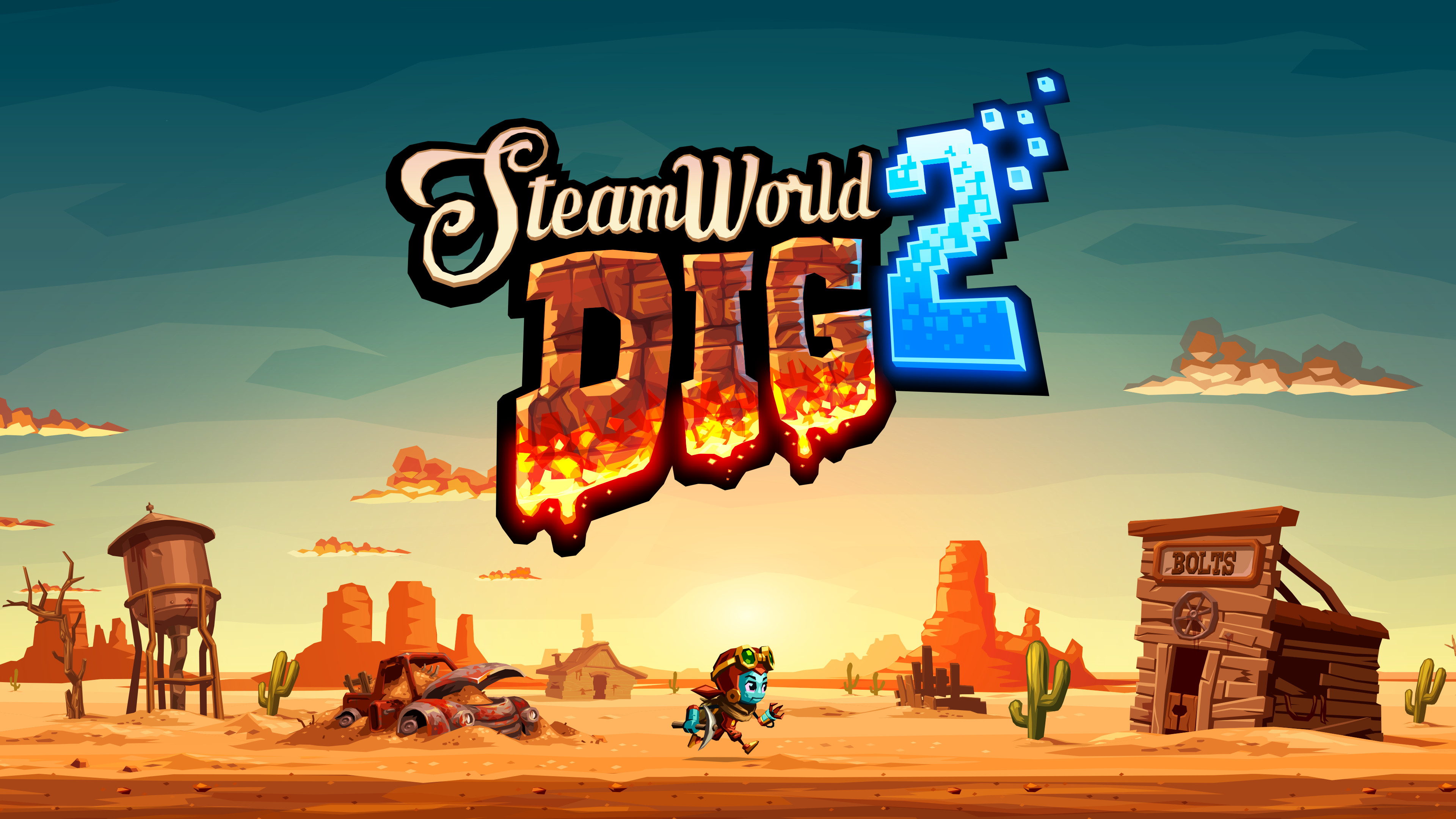 I'll be honest, the first game didn't hook me at all. Even with it being much higher quality than a lot of games, I generally feel quite burnt out by the amount of puzzling platformers we have already. However, SteamWorld Dig 2 did manage to mostly win me over. There's a lot of things to love about this game, from the presentation to the great gameplay, it's a fantastic game overall.

What really got me with the game, is that it was exciting even from the early stages. A lot of platformers are too slow to build up for me, but within the first few minutes I already hit a minor boss fight. One moment I was dodging fire, the next I was wall jumping and then sprinting off a platform onto the enemies head. A few smacks later and I was done. 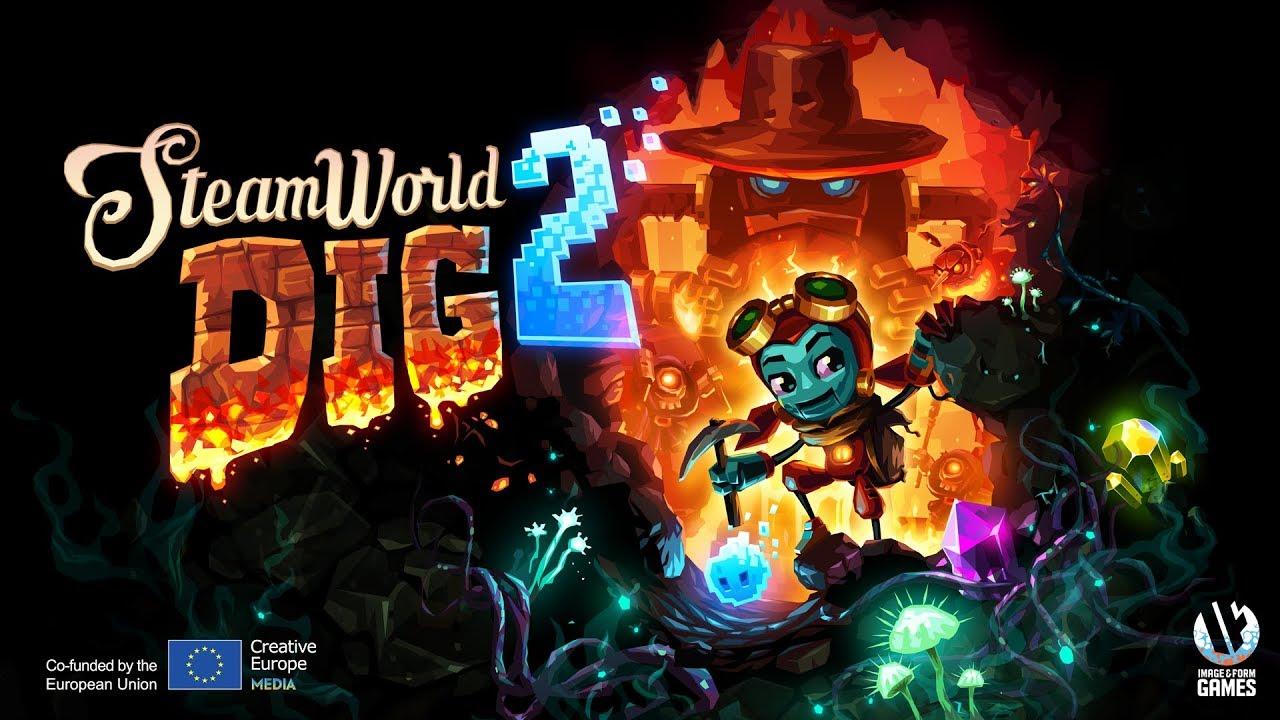 Sadly, once you get past that bit, it does end up becoming quite slow and ends up feeling a little like a re-hash of the first game. Since a lot of it is exploring, mining, selling and repeat. Thankfully, there's plenty that does redeem it.

The graphics, for example, are fabulous. You will see what I mean in the shot I took below. The lighting is fantastic, all the backdrops and the platforms have a great amount of detail to them and it's just so lush. The overall design of the game is practically perfect. 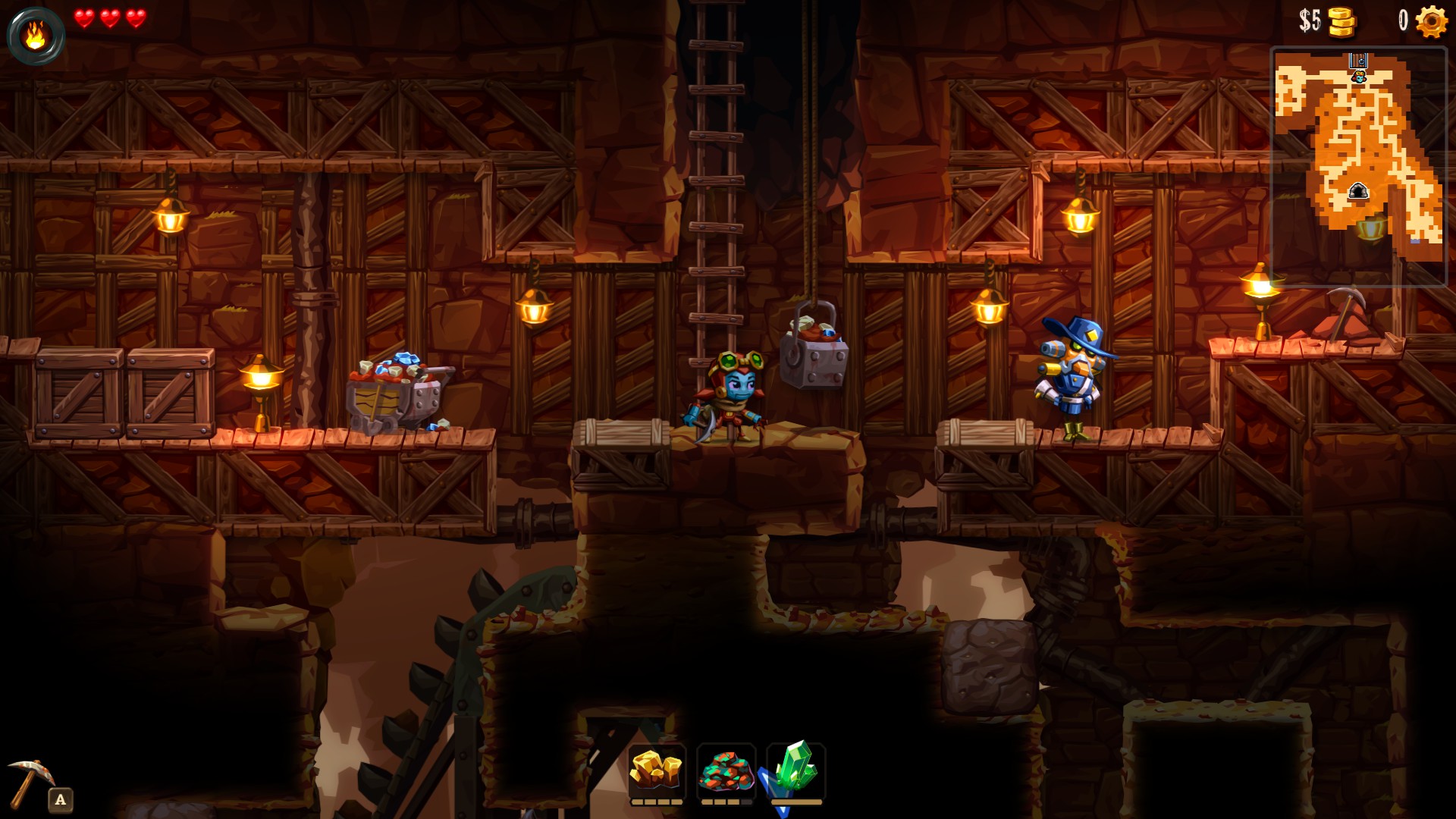 The upgrade system is great too, as it offers many different options for the playstyle you're going for. You could pick to mine faster, carry more, make your light last longer and so on. It does at least allow you a sense of progress that just keeps going, so all that exploration can pay off in a big way. The system is actually in two parts, with the basic upgrade system and additional mods you can pick using cogs you've managed to find. 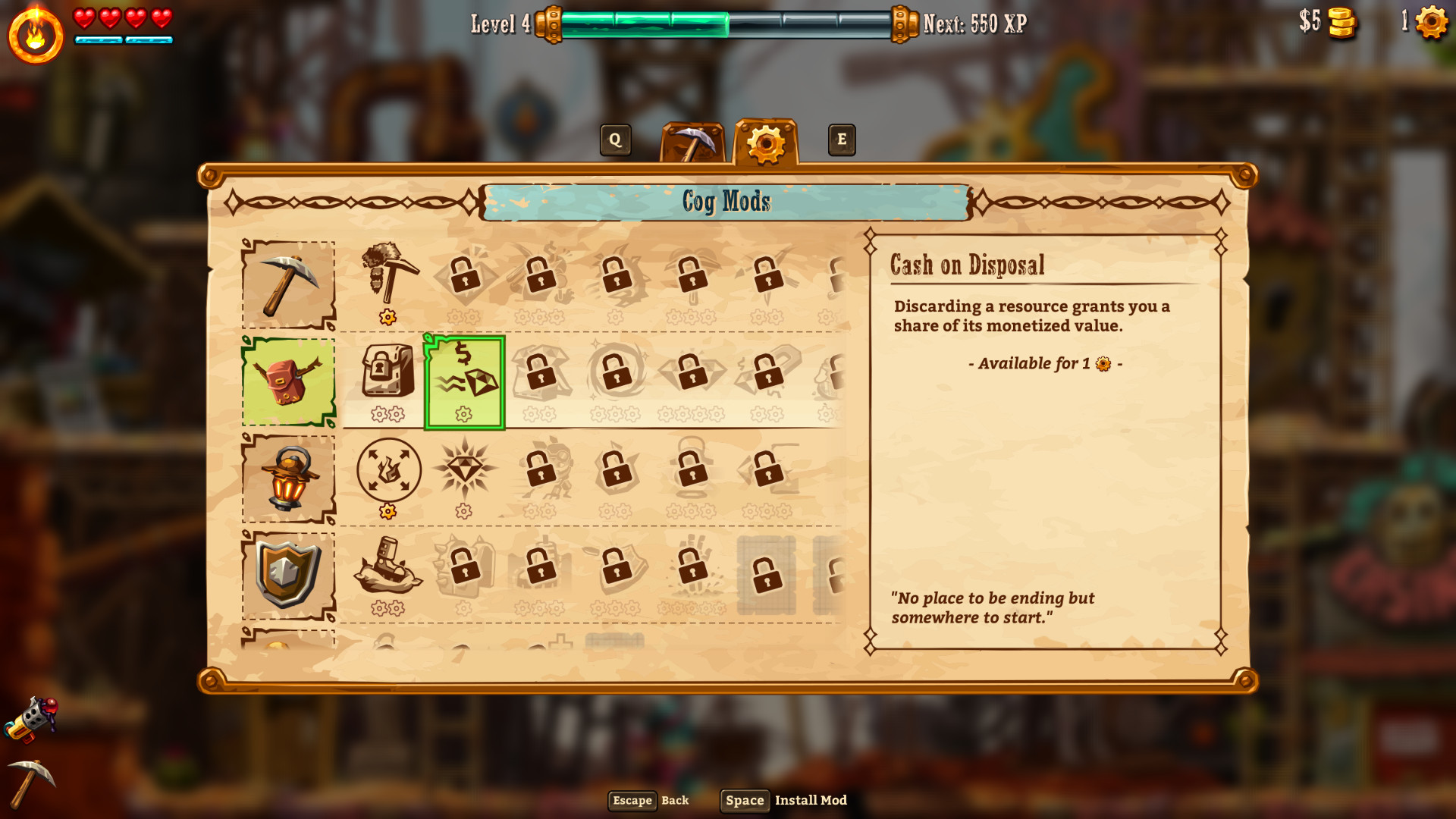 The cog system is great, because you can switch around your cogs at any time. Since there's a limited amount to find and it can be a while before you find them, allowing you to switch them around based on your situation is a fantastic idea. I won't spoil where to find the cogs, but I will say that you might find some in unexpected places.

On top of that, you can also recover artefacts which, when traded-in, will give you blueprints.

The game does offer a good risk/reward system. If you spend long enough exploring, you could recover vast riches to upgrade. However, stick around too long with a full backpack and you might bump a few too many bugs, hit a trap or get squashed and lose all that you've recovered as you're sent back to a checkpoint. Those lost resources do not magically reset either. Once you've mined something, it's either yours to sell or it's gone forever. 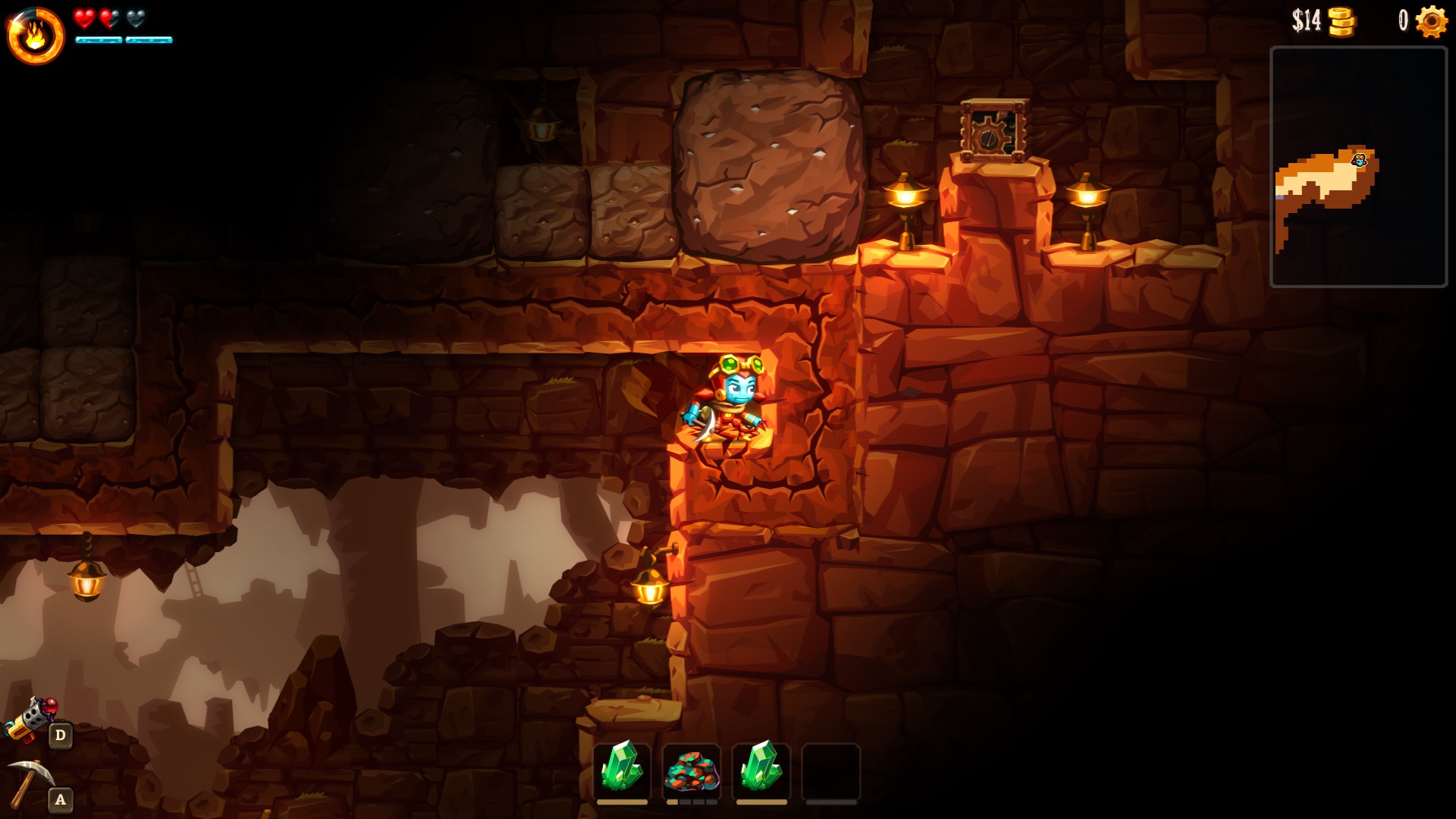 There's been more times than I care to admit when I've lost everything. Thankfully, with the amount of content to explore, losing everything a couple times isn't all that fatal. An annoying setback, sure, but a chance to explore and uncover more secrets. Slightly less annoying with the upgrade system though, since it allows you the option of losing less resources too.

Plenty of times I've lost something, has been inside one of the various challenge caves. This was such a great feature that breaks up the usual exploring. They all offer different challenges and rewards and some of them really got my heart racing. One near the start sees you break apart a block, which causes a chain reaction as many more rocks fall down, so it becomes a mad dash backwards across the cave to survive.

Here's another example of just how wonderfully detailed the graphics are: 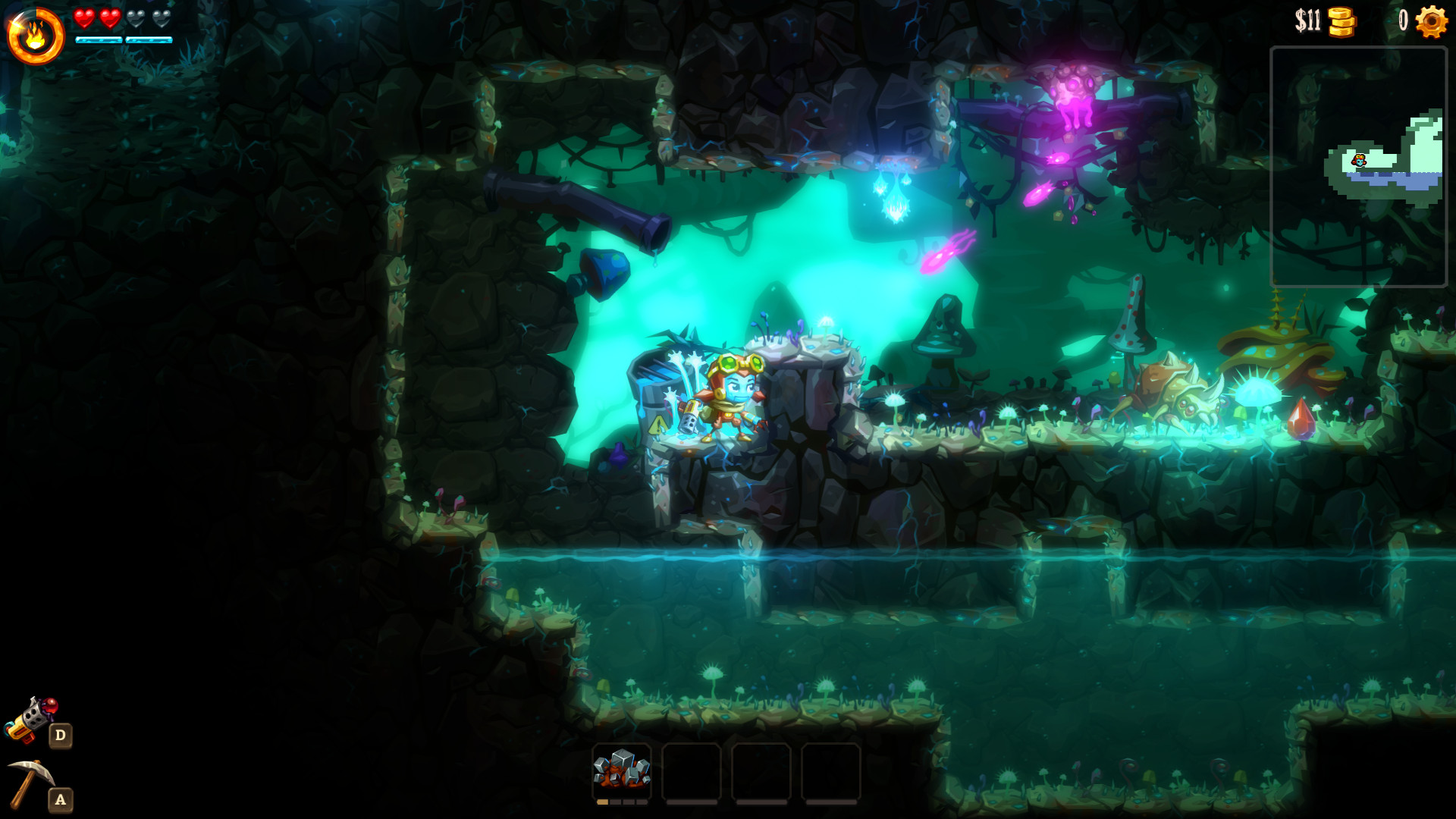 The game by default has a map marker system, showing helpful icons of where you need to go. However, these can be turned off any time if you prefer a more "classic" experience. So they've managed to balance it nicely for those who want a slightly more difficult experience, with those who want to get through it.

The most amazing part of the game has to be the various types of creatures you can find lurking in the deep. Seeing them fight amongst themselves was quite hilarious. The weird rolling snail that shoots spikes caught me with such a shock, I was chuckling for a while after. Seeing them shoot their exploding spikes and then watching them fall is so great!

It also worked perfectly with my Steam Controller, so that's yet another notch in its favour.

It hooked me in way more than I though it would, I could hardly stop myself playing. Image & Form have created such a fantastic world to explore that's rammed full of imagination and personality throughout. A solid Linux release and a pleasantly surprising game.

You can find SteamWorld Dig 2 on Steam and GOG.

Article taken from GamingOnLinux.com.
Tags: Action, Adventure, GOG, Indie Game, Platformer, Review, Steam
8 Likes, Who?
We do often include affiliate links to earn us some pennies. We are currently affiliated with GOG, Humble Store and Paradox Interactive. See more here.
About the author - Liam Dawe

I love steamworld 1. In my first gameplay, I found it boring, but I didn't notice that has passed many hours. Some days after, I came back and I got addicted.
0 Likes
rustybroomhandle 24 September 2017 at 10:54 pm UTC

Had a good time with this over the weekend. I actually enjoy the mine, sell, repeat stuff and was happy once the game opened up an I could just explore and buy all the upgrades and find the secret areas.
1 Likes, Who?

View PC info
Very sweet, just bought in on GOG! I totally like that this is a DRM-free day-1 GNU/Linux release.
1 Likes, Who?

View PC info
great metroidvania with a really good grade of customization of the experience, really enjoyed it over the last weekend.
0 Likes
no_information_here 25 September 2017 at 8:40 am UTC

I rarely purchase anything at full price on release, since I am very patient. However, the devs had impressed me with their previous games so I gave them full price.

Verdict: The balance is good and the graphics are perfect. Story is solid and the difficulty is always fair.

I actually like the slower parts that Liam complained about, since it gives some variety in exploration. I don't need action all the time. That is the beauty of a metroidvania.

My steam controller worked with no extra configuration (uncommon). However, there were a couple places I wished I had the precision of a proper D-Pad. It is definitely playable with the SC, though.

First playthrough: 18 hours with all the secrets (but not all the achievements). I only looked for a hint on a couple hidden things (out of 42) so the sidequest items are quite naturally "discoverable". I like to take my time so YMMV.
4 Likes, Who?

View PC info
Looks like a lot of fun. Gotta keep an eye on this one!
0 Likes

View PC info
There's no need to miss out on the first one. Just go and grab it, too. They're both excellent and this is a continuation of the first, so it just makes sense.
0 Likes