It might not look like the most graphically impressive shooter around, but the WWII shooter Easy Red [Steam] is being reviewed rather well for the gameplay.

Linux support arrived yesterday, although it doesn't yet have a SteamOS icon to indicate Linux support it was announced directly on Steam. 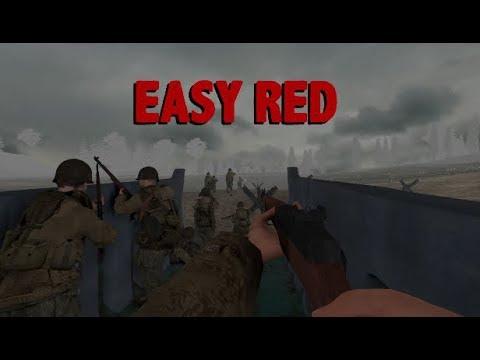 The graphics really aren't great, but it has gameplay that actually looks decent enough, including vehicles which looks fun.

Welcome to the Operation Overlord. Prepare to land on all five Normandy sectors: Omaha, Juno, Sword, Utah and Gold. Fight on the sand, by the forests, parachute on the fields and conquer the hills: Welcome to Easy Red.

In Easy Red you will fight on the most significant battles of the D-Day, from the sea landings to the capture of Caen. You will able to drive vehicles, use many weapons, command your squad as team leader or take cure of it as a medic, refill magazines from your inventory, parachute from the sky, and much more.

Buying Easy Red you will have access to all the future DLCs and updates.

I've reached out to the developer for review keys, so hopefully we will be able to give it some thoughts soon.

View PC info
Oooo, puts me in mind of the very first C.o.D. game. I'm glad you brought this to our attention Liam, because normally I would pass on something like this at first glance. I would (wrongfully) have assumed it was just another tired old multi-player FPS toy. It's so nice to once again see someone making a single-player, campaign-based FPS. That it has such positive reviews is icing on the cake.
0 Likes

View PC info
I wouldn't recommend it right now.
The biggest issue I had is that once you die/win, the cursor disappears, until you restart the whole game.

It's incredibly annoying
1 Likes, Who?

View PC info
It looks like Flashpoint in wwII :-)
2 Likes, Who?

View PC info
The graphics don't bother me at all, as long as it's fun to play. I look forward to your review Liam :)
0 Likes

View PC info
It reminds me of Arma Cold War and Medal of Honor Allied Assault.
The graphics do indeed seem primitive but if the gameplay is fun then I have no objection :)
0 Likes

View PC info
Already refunded: As commented above, the mouse cursor will disappear after you get in game. That means you can't even use the inventory unless you blindly 'feel around', and if you die you're gonna have to quit the game, really poor show on the dev's part.
1 Likes, Who?

View PC info
This is what i dont understand about game development companies. This one dude, made this..which is still a work in progress mind you, but it is playable, and so far a little enjoyable. He made a Linux version. Now the larger development teams that use Unity, and argue about not having enough funding to port to Linux doesn't make sense.

Quoting: OrkultusThis is what i dont understand about game development companies. This one dude, made this..which is still a work in progress mind you, but it is playable, and so far a little enjoyable. He made a Linux version. Now the larger development teams that use Unity, and argue about not having enough funding to port to Linux doesn't make sense.

My guess is the bigger the game the harder to port.
Also team politics might come into play but again all I am doing is speculating.
0 Likes
1/2»
While you're here, please consider supporting GamingOnLinux on: