Hello and welcome to my first article on GOL. Today I will talk about a game I played on Android and eventually on Linux called Exile Kingdoms. I first played this game on a tablet, under circumstances I have honestly forgotten, but it left an impression. I decided to pick it up on Steam to relive the experience on a more comfortable platform.

However, I won't lie, the game is primitive by modern standards. The graphics are somewhere between Dink Smallwood and Diablo 1, and the combat is retro with lots of stutter.

Yet despite all this, I like it. I like it a lot. So why is that? Well for one it has a big world. And due to the lack of fast travel, excluding mage towers that can teleport you, it just feels big. In this respect it reminds me of Morrowind, where you had to use Silt Striders and Mage Guilds to move long distances. Oblivion, by comparison, seemed to lose a lot by allowing the player to teleport everywhere like Captain Picard.

While combat looks primitive, it has depth. You have four classes and multiple damage types such as lightning and death magic. You can plan tactics versus certain monsters, learn about their weaknesses from talking to NPCs and use various items and potions to your benefit. This actually reminded me of the preparations you undertook in the Witcher games, brewing potions and oils and using various spells to outwit monsters.

The classes are pretty standard, almost taken straight from the MMO template of Warrior, Rogue, Mage and Cleric. There is a variety of skills to learn and picking one and then focusing on it can make a big difference.

As a warrior I chose two-handed weapons. When I got to the last level I had a good chance to stun enemies in combat which saved my butt many times when my health was running low! 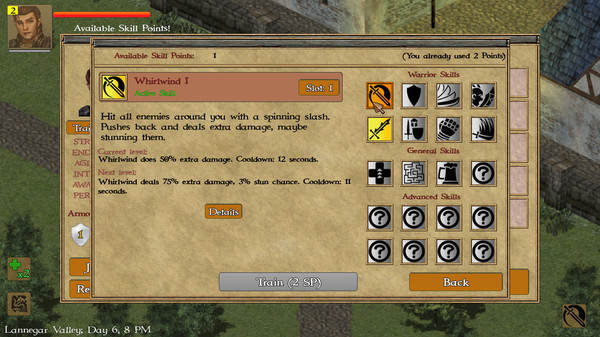 Gameplay is fairly standard. You go from town to town completing quests and progressing towards your main goal. Most towns have standard merchants to help you out such as the inn, blacksmith or priest.

You get two uses per day of an ability that fully restores you, then you must rest at an inn. The cost to rest increases per level. You can get healing potions but early on they're expensive and money is best spent on equipment. 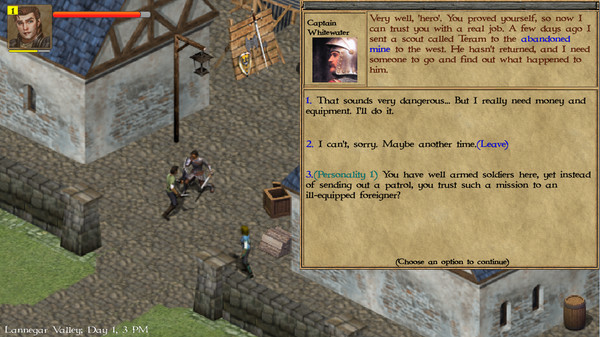 Another good thing is that the game rewards quest completion far more than level grinding. The quests are fairly basic as usually you must kill enemies to get to the objective, but the context is often interesting in each case. For example, "Recover a mace from the tortured soul of a monk" or "Obtain war plans from orcs". And nobody suggests that you must kill everything on the way.

There is also a faction system that adds even more depth. The factions are non compatible so you may need several playthroughs depending who you support. Again I have to draw a parallel to the Elder Scrolls games, namely Skyrim. But in Skyrim, you could join the assassins, culminating in you killing the Emperor, then as if nothing happened, you could join the imperial army to fight rebels. Here your choices seems to matter. For example I decided to be kind to an imprisoned savage and give him a wolf skin that reminded him of his North homeland. This pleased "Savages" and increased my reputation with them but decreased my reputation with "Desert Kingdoms" who kept slaves and another faction (which I sadly do not recall).

Another example is the religion in the land. Nobles worship at grand temples while the common folk worship the Three (sort of a play on the Holy Trinity). The priests of the noble caste scoff at you for helping the priests of the Three.

Yet another example is in the third town. A lady who is a spice merchant has lost an amulet certifying her bloodline as a merchant and so cannot sell to the upper class. She offers a quest to recover her amulet but as I leave town, the merchant guild ask me to return her amulet to them so they will have a monopoly on the market. This does add an element of depth that keeps the story interesting.

There are also random encounters which will spawn in your travels. It could be a thief desperate to sell some "hot" property, an alchemist or armourer selling their wares or some savage hunters willing to buy wolf skins from you.

In a nutshell, while I admit that the presentation is flawed, the game does compensate well with its depth and the interesting world. If you are unsure that you would like this, I'd suggest perhaps get it on sale. 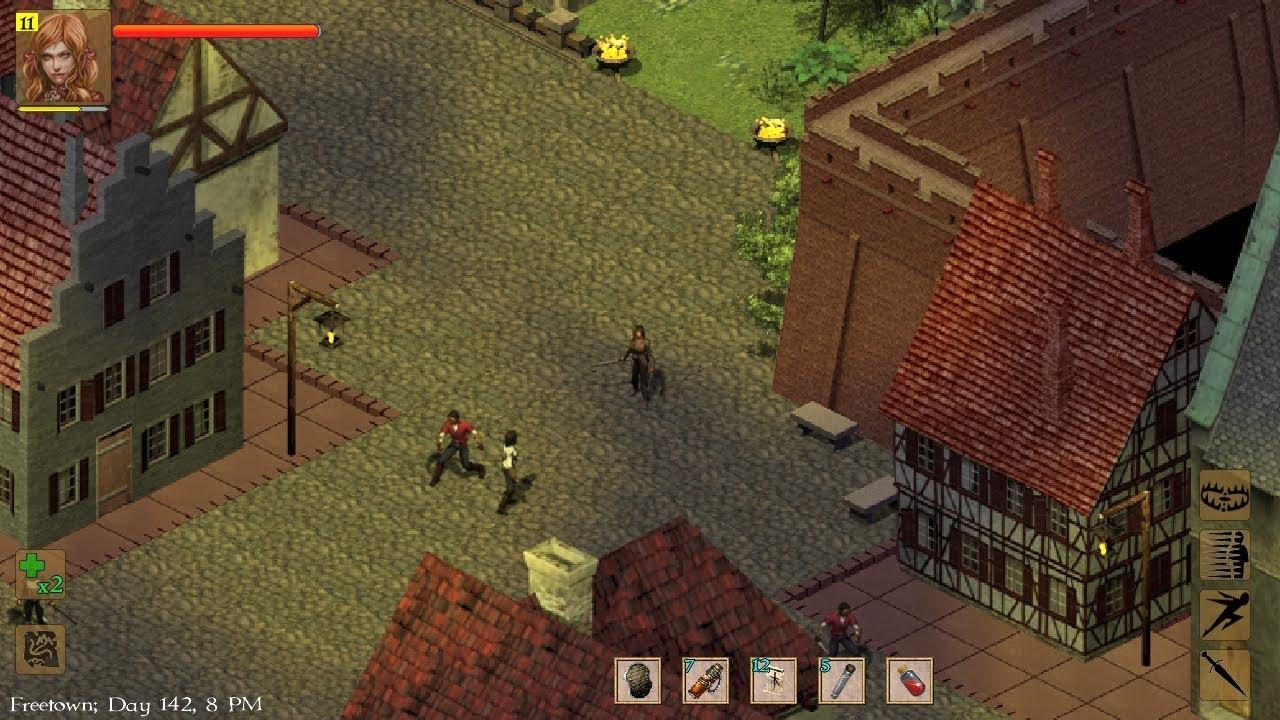 Minor note : I gifted a copy to Samsai, who played it on stream. He mentioned it would be good to be able to move by keys rather than clicking (as you would tap a phone/tablet screen). It turns out you can! However, the default bind is the arrow keys instead of WASD.

You can find the game on Steam and as mentioned, it's also available for both iOS and Android. Sadly, not available on GOG, but there's a forum discussion here. Don't forget to check the wiki if you get stuck!

Article taken from GamingOnLinux.com.
Tags: Action, Adventure, Open World, Review, RPG, Steam
9 Likes, Who?
We do often include affiliate links to earn us some pennies. We are currently affiliated with GOG, Humble Store and Paradox Interactive. See more here.
Some you may have missed, popular articles from the last month:
The comments on this article are closed.
6 comments

View PC info
Pretty sure this game was built using some of the assets from Flare RPG.

View PC info
Hi! its gonna be a pleasure to read you
0 Likes

View PC info
The best games articles are those written from personal passion. You can't force this kind of thing on a weekly basis (no hard feelings, Liam). Your recounting has me sold despite the fact that I almost always reject games simply for poor presentation, being 2D in this case. !GoLbot notify me when the DRM-free build arrives.
0 Likes

Quoting: GustyGhostThe best games articles are those written from personal passion. You can't force this kind of thing on a weekly basis (no hard feelings, Liam). Your recounting has me sold despite the fact that I almost always reject games simply for poor presentation, being 2D in this case. !GoLbot notify me when the DRM-free build arrives.

No hard feelings at all, you're exactly right. It's why we are open to submissions of all types, so we get a nice mix of content.
2 Likes, Who?

View PC info
I've been trying to play it for the last three months or so, but the difficulty, and the combat system are quite killing me. It's not a "hack'n'slash". You basically must use the Space Bar in order to be sure to hit your target, because you cannot just click your mouse like in a Diablo or Sacred or Torchlight etc. The "ported from mobile devices" part of the game is maybe too strong to my taste. But i really would like to like it.. . Should try more, but again, time is not an infinite resource for a human being.
0 Likes
While you're here, please consider supporting GamingOnLinux on: