Robocraft, a free to play game that I’m actually quite a fan of has been through another little evolution with the Infinity Update.

In Robocraft, you build robots by sticking blocks together, then mounting all sorts of weapons and propulsion systems on them to create some rather amusing designs.

In the past, you needed duplicate items to use something more than once outside of basic blocks. The Infinity Update does away with this, to enable your creative juices to flow faster than before. Now, once you unlock something (or purchase a cosmetic item) you can use it as many times as you like. 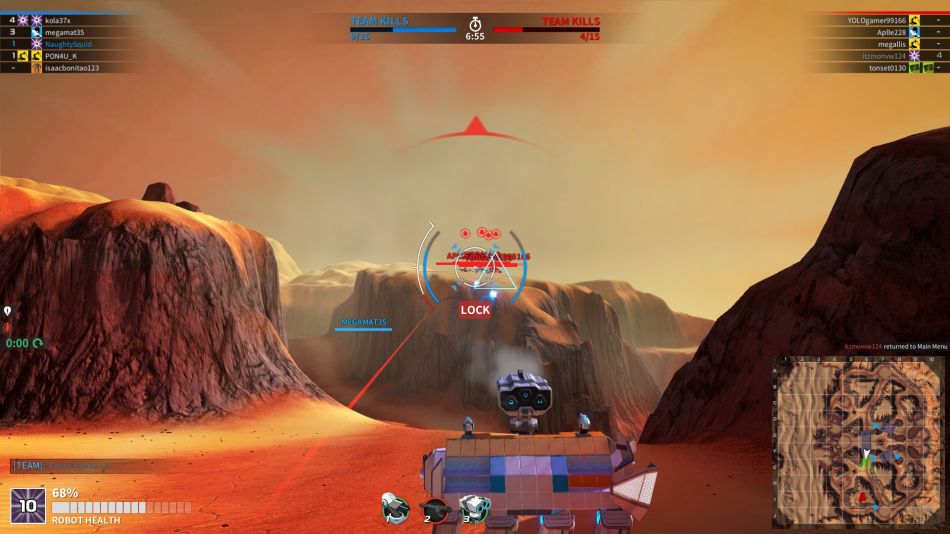 On top of that, players who don’t give them any extra money now have an expanded set of colours available to paint your robots. You now have 10, instead of 2 or 3 like it was before.

The Tier system has returned as well, so now each robot you make is given a Tier depending on what objects you have placed on it. To go along with the Tier system, they’ve also expanded the single-player experience to include campaigns suitable for T3 and T4 robots.

Robocraft’s UI has also been improved, everything is a lot clearer and easier to access. I think they’ve finally got the UI to a stage where it’s actually pretty good. They’ve also added in new weapon projectile effects, new weapon projectile hit effects, matchmaking improvements and so on. Tons more to it, see the full patch notes here.

While you can still buy a premium subscription or a premium for life pack, which gives you additional XP, more paint colours and a few other bits it’s really not pay to win at all now. You play it, you unlock tech and you use that tech as much as you like. Honestly, it’s much nicer now for both casual and dedicated players as the playfield is a lot more even.

After going back to it for a while after this update, I'm enjoying it a lot more than I did in the past. I liked it, sure, but now it feels like it's worth a lot more of my time. I've had a few seriously epic battles, it becomes really quite frantic. Definitely got the blood pumping, as I ran around a corner chasing down an enemy hopping away on one leg—oh crap there's another three of them.

The way they're going, makes me want to support them. The Linux version has been flawless for me too, super smooth on maximum graphics settings with my GPU purring away happily at well over 100FPS constantly.

Article taken from GamingOnLinux.com.
Tags: Action, Free Game, Indie Game, Steam
4 Likes, Who?
We do often include affiliate links to earn us some pennies. We are currently affiliated with GOG, Humble Store and Paradox Interactive. See more here.
About the author - Liam Dawe

is the game Crossplattform Multiplayer?
It seems it is some "pay to win title", or do I get this wrong?

is the game Crossplattform Multiplayer?
It seems it is some "pay to win title", or do I get this wrong?

View PC info
My youngest son runs around with various Legendary weapons mounted on the side of his behemoth vehicles and has a great time. Multiplayer appears to be "non-toxic" too - people get on and play.
0 Likes

Nice to here. I will tell my son about the game. Perhaps he likes it and can play it with his friends. The only problem may be, that his friends actually can never play something else than only fortnite

View PC info
Kind of looks like a more complex Cybermorph from the Jaguar.
0 Likes

I've been playing roles too when I still was into that game. I played a dick. Literally. A flying dick built out of pink and red blocks. It was a bit underpowered due to aestetical limitations but I won many battles with it... probably people weren't able to concentrate when they saw that phallic phighter. I should definitely give this game another try.
3 Likes, Who?

I played it a long time ago (a year maybe or more?) and it was quite fun. Didn't even know it has a Linux support. I was usually running hybrid support or full-blown healer. Some of the creations of others were so great. Having unlimited cubes that sounds amazing, I might give it another try

View PC info
Someone can confirm that it is still locked by EAC to *buntu family? I'm particularly interested in OpenSUSE.

Bard 30 Nov, 2018
View PC info
I played this game a lot when it was in EA many years ago and it was great fun. Then I didn't play for a long time, but came back a year or so ago for a revisit and I found that it was completely changed - and for the worse. I didn't like it at all.

Now I tried it again and I like that I now can use as many cubes of an unlocked tech as I like and I also like the way painting the robot works as well. It is quite fun to play again and imo the game is much better than it was a year ago.

I don't know if this is any help to you Gryxx, but I use Steam/Debian 9.