I guess it's time to come back from the cruel wasteland and take a look at this simple yet fun indie strategy game that is not quite like anything I've seen before.

Cannon Brawl by Turtle Sandbox is a fast-paced game that combines real-time strategy with Worms-like artillery mechanics. You are an airship pilots who's in charge of the battles which are not handled quite like your ordinary RTS. You don't simply click to places and buildings get built, you must first travel to your HQ and buy the building and then fly back to the place where you want to deploy that building. You must also directly take care of the combat by flying to your buildings to deploy shields or aim and fire different sorts of weaponry at the enemy to try to destroy his HQ while protecting your own. 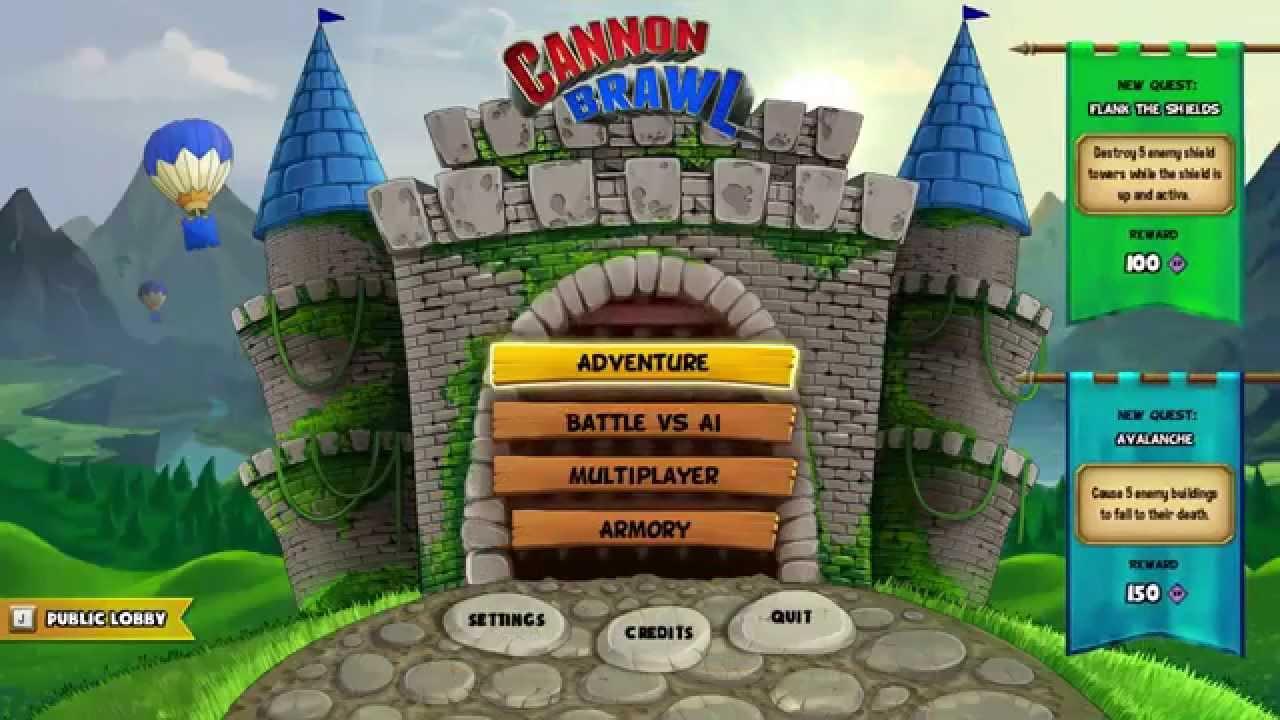 YouTube videos require cookies, you must accept their cookies to view. View cookie preferences.
Accept Cookies & Show   Direct Link
This game was something completely different to the games I've played. It mixes so many genres that it's difficult to even categorize it. However the gameplay is very simple and you can pick it up and play it almost instantly. These days I normally dedicate more than an hour to learn about the different mechanics of the games I play. This time it took me just 25 minutes to figure out everything that was necessary to demonstrate the game.

The basic idea of the game is to try to built defensive and offensive buildings to try to take out your opponent's buildings and protect your own. You also have a simple form of economy, which is based on building gold mines on the limited resource spots that are spread around the map. With the gold you can build a wide variety of different buildings that range from simple cannons to missile launchers and shield towers. Most of the buildings must first be unlocked before you can use them either by playing the campaign or by buying them from the in-game shop using XP, which in turn is gained by completing different sorts of quests, which might include for example dealing X amount of damage to enemy buildings, winning certain amount of matches as the airship pilot X and so on. This approach at first seemed like a mobile pay-2-win scenario, but luckily there are no microtransactions involved in the game. Everything needs to be unlocked by playing the game.

The gameplay is very fast-paced and the fact that you must travel between your buildings and HQ means that you are constantly on the move. It also means that you need to weigh carefully when to leave your post, because your weapons are not firing without you and your base becomes quite vulnerable. It soon becomes a hectic struggle of managing your buildings and expanding to the plots of land that offer you the best firing position towards the enemy base.

Cannon Brawl was a surprisingly good game. I didn't initially expect a whole lot but the innovative gameplay convinced me otherwise. I've heard that this game is awesome to play with a friend and I believe that would be the case, though I have yet to try the multiplayer. Keep this one in mind, for it's something that I'm sure you never knew existed and possibly something you never knew you needed until now.

Article taken from GamingOnLinux.com.
Tags: Action, GOL Cast, Review, Strategy
0 Likes
We do often include affiliate links to earn us some pennies. We are currently affiliated with GOG and Humble Store. See more here.
About the author - Samsai