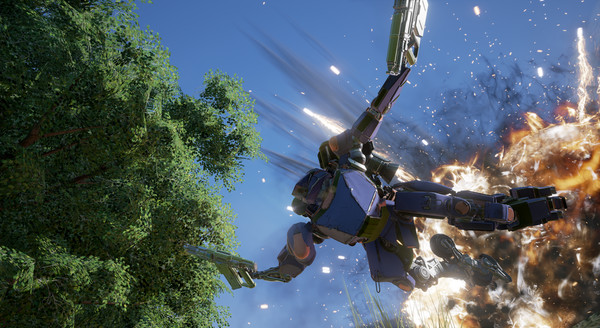 Heavy Gear Assault [Steam], an online mech-battle arena is now available in Steam Early Access. It has Linux support, but it has issues you should know about.

I don't have this particular issue, but there's a rather long forum post about it on Steam where lots of Linux gamers cannot even login in. I would keep an eye on that before you think about buying into it at this time.

An issue I do have, however, is that mouse movement for the camera appears partially broken. It seems you're supposed to be able to move the camera by just moving the mouse, but it doesn't do it. It seems to work at random. I pressed enter to chat and sent a message and then it worked, but as soon as I hit another button to do something in-game the mouse movement stopped again. Either the input in broken, or the keybindings are completely messed up. I don't seem to be able to adjust the keybindings either. I reported this a week ago and haven't received a reply yet. Article taken from GamingOnLinux.com.
Tags: Early Access, Action, Steam
0 Likes
Share

View PC info
I got the game for free by signing up for their newsletter, so I can't really complain. :) But I do hope they properly support Linux, and fix all the issues.
0 Likes

View PC info
Yes, the mouse bug it's already reported, it appeared in the latest builds. They are doing all they could (but are a small team) and they was very supportive with the Linux testers (I was involved in testing since many time ago). But yes, now anyone that it's interested be wary there is still many bugs, but it's a very promising project (not only for Heavy Gear fans but also for anyone that loves mechas).
0 Likes

boltronics 30 Dec, 2016
View PC info
I'm one of the people who can't log in, but I too got the game through the newsletter. I personally dislike games that require a separate login to Steam anyway, so no big loss.
0 Likes

View PC info
I am just waiting for my free key to arrive in my email.
0 Likes

Quoting: NovenTheHeroI am just waiting for my free key to arrive in my email.

They were distributed two weeks ago. I am afraid that chances of getting a key are slim at this point.
0 Likes

View PC info
I'm having the login bug too. Seems like it's not a Linux only issue either as there are posts from Windows users with the same problem too.
1 Likes, Who?
themixturemedia 30 Dec, 2016

View PC info
I am still having issue with login and even when I got the update from last night. I am not sure why they have another login to get into the game it really does suck. It should be an option not a requirement.
0 Likes

View PC info
Can't even start the game... It crashes after OpenGL initialisation on AMD drivers it seems, at least on MESA.
0 Likes

View PC info
I don't feel attracted at all by this "mechsuits" game. I much prefer slow heavy Mech model. I wish Mechwarrior online was on Linux. WINE perf are terrible with it on my machine, but it was fine 2-3 years ago when i was still dual booting. I tried yesterday again, from PlayOnLinux, not playable in good condition...
0 Likes
1/2»
While you're here, please consider supporting GamingOnLinux on: