You might remember, that back in September last year I talked a little about Lutris and Overwatch [Official Site] together and how it was working well. Here’s an update on how it’s been going.

Overwatch, developed by Blizzard, is an online team-based shooter that feels a lot like Team Fortress 2 from Valve. However, as much as I’ve tried to get into TF2 it just doesn’t stick. TF2 feels like it has no identity, it feels…bland.

Overwatch on the other hand, is an incredibly exciting experience and I’m still very much a beginner. It has a pretty loud and proud identity, along with various animated shorts which help to suck you into the world. It’s something friends play practically religiously too, so it’s one of those times where I’ve felt a bit left out, well—no more!

When I tried it previously back in September last year, the performance was pretty good. Fast-forward multiple months, a few new versions of DXVK have come along and the experience is mind-blowing. I don’t want to oversell it, but seriously it’s so smooth I completely forget that the work done to get it working on Linux wasn’t done by Blizzard directly.

I should note, there’s still one downside. Before a cache is built, it will stutter and it doesn’t look good. However, before even when the cache had built there would still be odd bits of noticeable stutter and slowdowns. Since switching over to DXVK 0.95, that’s basically all gone. Honestly, it’s smoother than the majority of actual Linux versions of games I’ve played recently and that’s saying something big. 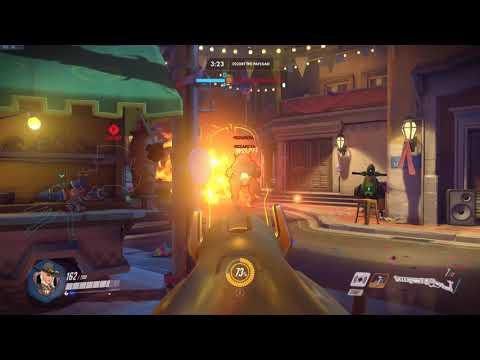 My complete lack of skill aside, how smooth it is in that video I took of a recent game should speak for itself. You can see how well it performs and that’s with it on very high settings.

Additionally, an issue where the Blizzard Battle.net client would fail to login and say it went to sleep (something like that anyway) also seems to have gone away so that’s awesome too. The only issue I’m left with, is it starting in windowed mode needing a quick ALT+ENTER to fix and away I go. That’s less effort than I have to put into for some “native” Linux games, so it really doesn’t bother me.

It’s funny really, some of my own first steps on Linux involved mucking about with Wine. Here I am some thirteen years later, enjoying another game thanks to it (DXVK has helped a lot too of course). In a world without Windows, having Overwatch run rather nicely on Linux could be a big help for those looking to switch and test the waters.

Another shout out to Lutris, for making installing and managing the game a mostly painless experience. If you do have issues with Overwatch on Linux, this page can certainly help.

Article taken from GamingOnLinux.com.
Tags: Video, Wine | Apps: Overwatch
12 Likes, Who?
We do often include affiliate links to earn us some pennies. We are currently affiliated with GOG, Humble Store and Paradox Interactive. See more here.
About the author - Liam Dawe

View PC info
> TF2 feels like it has no identity, it feels…bland.

Strongly and violently disagree.
18 Likes, Who?

I've no doubt plenty will, what games people like is a very subjective thing.
4 Likes, Who?

View PC info
So happy to hear that. OW is one of the main reasons for me to boot to windows (which resulted in not playing OW much, because even with SSD, it is still a chore to reboot and use an OS where is nothing installed and which constantly tries to ruin your gaming session with aggressive updates, even after applying several hacks to disable them). I should finally try it under tux. :D

View PC info
It's amazing, I bought it when Hammond was introduced (this summer, not sure when exactly) and I was still switching to Win to play. It mostly worked but I had a few issues with the installer and BattleNet. Now, it's been something like 2 months without even touching Windows. There are still a few issues, but I've been able to work around them:

- PulseAudio doesn't work, weirdly, except when I plug my recently bought headset. Then it works perfectly. If I don't, though, it tries to grab a stream and fails all the time. Completely stopping it and letting OW use ALSA works, though.
- LCONTROL is impossible to bind. Fixed by remapping the key to RCONTROL.
- Sometimes it stops registering a click-hold and I need to re-click with heroes like Brig, Mercy or Moira (possibly with others, but thouse are the "hold M1 to win" ones). I've gotten used to it so much I don't know if it still happens but it's a small thing.

The first two basically means that I need to have two scripts to launch it, but that's ok. Other than that it works amazingly well, I'm really impressed with DXVK. I haven't noticed the shader caching stutter with the last big path, either, so I'm glad that's fixed.
2 Likes, Who?
kuhpunkt 21 Jan, 2019

I've no doubt plenty will, what games people like is a very subjective thing.

But it already had great vibrant characters 10 years before Overwatch, and they already had shorts about the characters and comics and... hats! Many many hats! :(
6 Likes, Who?

I've no doubt plenty will, what games people like is a very subjective thing.

But it already had great vibrant characters 10 years before Overwatch, and they already had shorts about the characters and comics and... hats! Many many hats! :(

I just don't see it. To me, TF2 has such a basic and uninteresting design to it. It has as much character as any other shooter out there. I mean, just look at the classes, they're extremely generic. You have a Medic, a Soldier and so on. Where's the character in that? There is none.
2 Likes, Who?

Quoting: Darkhoggand I was still switching to Win to play.

i was Speed reading and it took me 3 reads and 1 minutes to figure out that you didnt miss typed this game was "pay to win", what you typed was: i was switching to windows to play it.

Quoting: elmapulliam you forgot one important thing...
whats your rig?

That can be see any time on my profile.
0 Likes

View PC info
Yeah Overwatch is super fun! and it runs amazing, even on not so great hardware, I used to play it on an ancient laptop, and you can crank settings really low to make it playable even on truly weak integrated chips on a laptop. Now with a pretty powerful (but not like mindblowing) laptop I can play on Ultra settings and it is smoother than essentially any other game, as you say. Blizzard really did make a very well optimized game!

We are a couple of us tuxxers who play almost every evening, so hit me up in the discord if you wanna join in!
1 Likes, Who?
1/6»
While you're here, please consider supporting GamingOnLinux on: