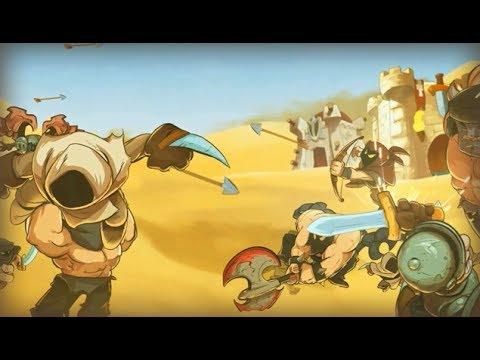 I still haven't even had a chance to play Kingdom Rush yet, I know, bad Liam. Too many games, too little time right now.

Really great to see a developer deliver when they say a Linux version is coming, something to celebrate again.

About the game (Official)
The world's most devilishly addictive defense game is back - welcome to Kingdom Rush: Frontiers!

Bigger and badder than ever before, Kingdom Rush: Frontiers is a whole new level of the furiously fast, enchantingly charming gameplay that made the original title an award-winning hit. Command your troops through an epic (mis)adventure as you defend exotic lands from dragons, man-eating plants, and ghastly denizens of the underworld -all with flashy new towers, levels, heroes, and more goodies to help you crush your foes to a pulp. (Don't worry, we've still got all the good ol' stuff from the last game, too. It's vintage now.)

Kingdom Rush: Frontiers packs in so much content, it's like a fully upgraded artillery blast of mouthwatering, pixelated joy launched right into your smiling little face... and it hurts so good! Article taken from GamingOnLinux.com.
Tags: Steam, Strategy, Tower Defense
0 Likes
We do often include affiliate links to earn us some pennies. We are currently affiliated with GOG, Humble Store and Paradox Interactive. See more here.
About the author - Liam Dawe

Cool, thanks for the news, as Steam didn’t show it to me. It’s also on Humble although just as a Steam key and they don’t list Linux yet. (Same on GOG: just Windows and Mac, but the first one is also for Linux there, so there is hope. Too bad the DRM-free builds aren’t on Humble…)
0 Likes

View PC info
Yay! I really enjoyed the first one! The original was one of the first games that I played on my SteamOS install with the steam controller, and it's already kind of nostalgic remembering how cool it was to get quality mouse-like controls from a controller. Some quality, fast-paced tower-defense action is a great demonstration of that!

I might have to wait for a sale, but I will definitely pick it up. So anyway, how sad is it that I'm feeling a little nostalgic for something that happened less than a year ago?
0 Likes

boltronics 30 Aug, 2016
View PC info
Nice. Another game I'm going to get all achievements on.

View PC info
That reminds me that I have to finish Kingdom Rush...
There are a lot of battles left that I have to settle out and many stars to collect 24/130

Did they vastly improved their engine?

I remember Kingdom Rush to heat up my notebook.
This is not the case with Frontiers.

Also: Everything is extremely smooth and VSYNC helps a lot.

Kudos to Ironhide Game Studio for bringing this truly addictive series to Linux!

micaelbergeron 30 Aug, 2016
View PC info
I contacted GOG.com to know if they will offer the Linux version DRM-free.
Stay tuned for the update!

micaelbergeronI contacted GOG.com to know if they will offer the Linux version DRM-free.
Stay tuned for the update!

It's in progress is all I know atm

View PC info
I've played Defense Grid (I & II) and Plants vs Zombies (I) - so this one could be a lot of fun!

Would you recommend to start with this or the first part of Kingdom Rush?

nepoWould you recommend to start with this or the first part of Kingdom Rush?

I haven’t played the PC version of Frontiers yet, although I remember playing the Flash version. The games are almost identical and there is no story, so you can start with whichever you want. I’d get the first one first, unless the second one is cheaper