Linux desktop market share hit an all time high in July, according to one measure

Here's a bit of positivity for you today! According to the statistics gathered by the netmarketshare website, in July the percentage of people using Linux on the desktop hit an all time high. 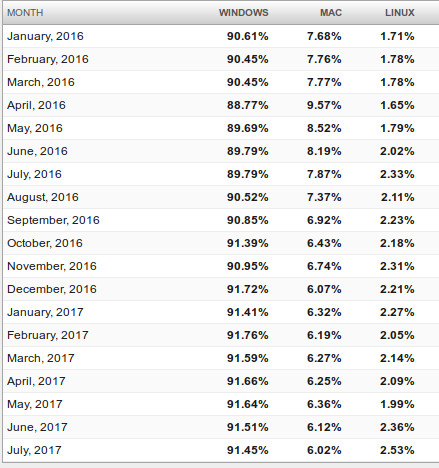 In June of 2016, Linux market share on the desktop according to their statistics hit over 2% for the first time. People were sceptical, but it seems it has mostly stayed above that 2% mark. In May of this year it did dip down to 1.99%, but as of July it recorded the highest yet at 2.53%.

We still have a long road ahead, but I've personally never been more happy with how Linux has progressed as an operating system and as a gaming platform. Our drivers perform well, we have a lot of great games and a lot of people invested in seeing us here at GOL continue too.

Sure we don't get the latest "AAA" rehash sequel number 4, and there are a number of titles I would personally like to see ported to Linux, but we do have an expanding list of high quality titles. Admittedly we get a lot of trash too, but thankfully there's a lot of great indie developers out there supporting Linux and some bigger developers too (hello Feral, Aspyr, VP etc). Article taken from GamingOnLinux.com.
Tags: Editorial
37 Likes, Who?
We do often include affiliate links to earn us some pennies. We are currently affiliated with GOG and Humble Store. See more here.
About the author - Liam Dawe

View PC info
That is a nice milestone. According to Statcounter (not sure how reliable this is?), Germany has passed 4% Linux market share in July. Next target, the elusive 5%...

View PC info
It's very likely that netmarketshare is counting ChromeOS within the Linux usage. Wouldn't consider that one when talking about Linux desktop market share.
http://gs.statcounter.com/os-market-share/desktop/worldwide distinguishes between Linux and ChromeOS. Numbers there are also on the rise and it's 1.79% for Linux right now.
So it looks more like we hitting 2% market share.

View PC info
That is awesome news in my bucket. And we should not forget, that the private desktop market is still growing, and to grow as an individual OS in a still growing market is more then a success.
With every fucked up release, Win10 get's more and more despised by its consumer base, and more and more will venture away from Win10, so this is the time when we need to be vocal about Linux as a serious alternative, so we don't lose those willing to change to Mac. We need more marketing, and we all can do it. I already converted 2 off my friends, the rest is hesitant, but I am more resiliant :D
1 Likes, Who?

But in July they have us back down to 1.64%. So not very accurate apparently, but I find it exciting. :D
0 Likes

View PC info
Sadly, It appears that our growth is at the expense of Apple... not Microsoft.

While I have no love for Apple, a healthy market would be showing a decline for the windows monopoly.
3 Likes, Who?

View PC info
If you look at the combined stats, Linux is mostly eating away at MacOS market share. Which is not surprising, given that Apple basically let their system rot until very recently. This trend might slow down, because of the big MacOS update, but I don't think Apple will change much. They are too busy with their mobile craze, to really pay attention to the desktop. MacOS will continue to bleed users to Linux.

Quoting: stretch611Sadly, It appears that our growth is at the expense of Apple... not Microsoft.

That is a good thing for Linux. Firstly, MacOS users are more likely not be interested in Windows, while at the same time their growing dissatisfaction with Apple pushes them to look for better alternatives. Linux is quite a natural choice for them. I.e. for instance, more than once I've heard from former MacOS users, that they switched to Linux because of OpenGL stall, and not being able to run recent games in Wine. Apple sure know how to shoot themselves in the foot. Though these are most probably "power users", who do something more than casual usage of their systems. The rest are less likely to switch.

To unsit Windows on the other hand, there should be more pre-installed systems. I.e. we need a major partner with someone like Dell and etc.

View PC info
To become a real alternative to windows, there must change a lot of things in linux.
I'm linux-user since 2 years, and i'm still wondering some times, how software is released. Often, you can't simpy download anything and install; no, you should compile that dumb shit before you can install and use it. This is something, you can't sell to any "normal"-pc-user, and this is something, that let other people say, linux is for freaks only.
0 Likes

Quoting: De1m0sTo become a real alternative to windows, there must change a lot of things in linux.
I'm linux-user since 2 years, and i'm still wondering some times, how software is released.

This is a non issue. There are two common methods. First, is software released through repositories. That's normally FOSS software, packaged by distribution maintainers. You just install it with your package manager. Second method, is independent distribution, by software vendors. These are more commonly (but not necessarily) closed projects. They provide tarballs / packages to install. If you need to build something from source, it means no one is distributing it for your system, so you do need to build it from source in such case indeed.

Quoting: De1m0sTo become a real alternative to windows, there must change a lot of things in linux.
I'm linux-user since 2 years, and i'm still wondering some times, how software is released. Often, you can't simpy download anything and install; no, you should compile that dumb shit before you can install and use it. This is something, you can't sell to any "normal"-pc-user, and this is something, that let other people say, linux is for freaks only.

I can't remember having compiled Linux software (which I didn't write on my own) for years.
AFAIR, my distribution is providing 70.000 packages...
Furthermore, I once made a comparison how many steps you need to install three open source programs on Linux and on Windows. Windows needed way more steps.

View PC info
Not bad.. bu when you click "source of the data"

You get to this website.. https://www.truestats.com/?source=nmsHome - it reminds me why I do so much to block advertising / tracking in my browser!

PS: Sorry Liam, I know advertising funds could effect you, but I probably wouldn't click ads even if I saw them, so no loss either way :P.
0 Likes
1/5»
While you're here, please consider supporting GamingOnLinux on: