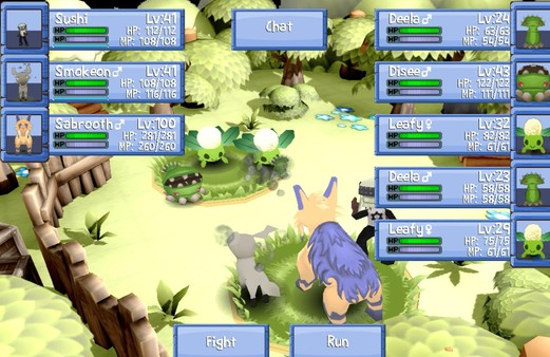 Minimon is an online and offline monster catching game inspired by Pokemon, and it could turn out to be a good one.

About the game
Start an adventure in a world full of monster hunters!
Plagued by a strange disease, the continent of Chroma is in panic, and a strange turn of events will turn you - a small kid - into a powerful monster hunter, capable of tame even Ulmaxia, the dragon king!

Features
- Customize your own monster hunter with tons of clothes, weapons and skills!
- More than 300 different monsters to train!
- Play either offline single player, local multiplayer via split-screen or online with up to 500 players per server!
- Tons of quests, secrets, and unlockable stuff!

Here's what didn't sit quite right with me:

UPDATE: It seems the guy claiming they are a developer isn't. So the real developer is doing a bit of damage control, shame that developers have to put up with this.

My thoughts
A user on the Steam forum claimed they were a developer, and gave the game a serious review making it out to be the best game ever made, and stated it had zero cons. After contacting the real developer, it was edited, and the real developer has cleared up the situation.

Even though it wasn't the real developer, here's a small note: Unless you're going to review your own game with something funny like "the amount of bugs keep me awake at night, I know, I made the game!", then just don't.

You can check out Minimon on Steam. I do long for a decent monster capture game on PC. Article taken from GamingOnLinux.com.
Tags: Editorial, Steam, Strategy
0 Likes
Share

We do often include affiliate links to earn us some pennies. We are currently affiliated with GOG and Humble Store. See more here.
About the author - Liam Dawe
I am the owner of GamingOnLinux. After discovering Linux back in the days of Mandrake in 2003, I constantly came back to check on the progress of Linux until Ubuntu appeared on the scene and it helped me to really love it. You can reach me easily by emailing GamingOnLinux directly.
See more from me
Some you may have missed, popular articles from the last month:
The comments on this article are closed.
15 comments
Page: 1/2»
Madeanaccounttocomment 25 Mar, 2015
Bought this. 3D Pokemon like MMORPG with linux and full controller support are all things I've been looking for. I honestly think the game could only survive as a free-to-play but I'm willing to support the development and I wouldn't be upset if they did decide to make it free to play down the road with a cosmetic in-game shop to support development and increase the player base.
1 Likes, Who?

View PC info
Looking at comments from both him and the dev, neither seem to really understand what the problem is. Which is pretty sketchy, so I think I'll stay well away from this one.
0 Likes

View PC info
(If the lead dev is to be trusted) That guy actually hadn't even worked on the game yet. So I wouldn't hold the dev accountable for what happened, seems like an over-eager fan trying to crawl into someone else's project and claiming some authorship over it. I haven't looked into it very much, but it might turn out that the dev was just doing damage control as well...

Either way, at the moment the game doesn't interest me enough. As much as I like Pokemon (and clones), it looks like it has quite a road to go before it's ready to leave EA.
1 Likes, Who?

ZelteHonor 26 Mar, 2015
View PC info
Well. I think you should really update this article because it is a bit rought. According to the last update from the REAL dev here: http://steamcommunity.com/app/308520/discussions/0/618457398957175723/ This guy never really work on the game. I think that it deserve the benefit of doubt.

QuoteHe is not part of the dev team, he only did beta testing along with other guys, I am very angry at him because of this.

If anyone doubts just go google around the game forums and you will see no post by him anywhere, plus no mention of his work in the game, because he didn't work on it, only I did work on the level design (thats why he does not have the [developer] tag, if he really was a dev he would have one, no?).

Also I dont even believe any dev would post a review on their own game, that is the most idiot thing ever. I don't need any fake reviews, I would prefer to have zero reviews than have fake reviews written by myself.

If you still dont believe, ask Valve or whatever, they will say you this game is associated with only an individual, no company at all, which would be required for a dev team of 2 or more people I think. This game was done by myself and a couple of freelancers artists I contracted who probably don't even have Steam accounts or play games at all.

This game has no DLC, no in-app purchases, nothing, you pay once and get all content.
If wanted to just get some money I would have made a kickstarter asking for 1 million dollars and then deliver a turd here, complete with 50 DLC packs, and then I would already have shilled the game with 100 fake reviews.

Now let's end this conversation please, let's talk about the game, not about this stupid rumors. Give me feedback so I can improve the game, thats why this is a "Early Access" game.

Btw I'm also going to release a free demo soon so that everyone can check it before buying.

Now I am definitely interested. I've never played a game quite like this, and it certainly looks intriguing.
1 Likes, Who?
Madeanaccounttocomment 26 Mar, 2015

Quoting: KeizgonI advise staying away from this game. Reading the developer's other responses to posts, it's bringing back some dark memories of some (rare) incompetent and unethical indie communities. I know it's bad to judge something based off a person's attitude, but I would like proof to know I am wrong, and I'm not willing to throw money away to find out for this.

The guy claiming to be the real developer has a much better attitude I'd say and he seems really enthusiastic about the game with a positive vision for it. Here is a link to his posts: http://steamcommunity.com/id/drakymon/posthistory/

Admittedly it comes off sort of trollspeaky at times but I'm fairly certain English is not his first language.
1 Likes, Who?

Liam Dawe 26 Mar, 2015
View PC info
I have updated the article, real shame developers have to deal with people claiming they are something they aren't.
0 Likes

pb 26 Mar, 2015
It's really childish to judge the game based on that a developer wrote a review on it. Especially if you're not even sure if it was a developer's review in the first place.
0 Likes

Quoting: pbIt's really childish to judge the game based on that a developer wrote a review on it. Especially if you're not even sure if it was a developer's review in the first place.

You say childish, I say cautious. If people are going to buy something, they need to know it's a legit game and not some hunk of junk with developers fudging reviews. It's quite important.
0 Likes
1/2»
While you're here, please consider supporting GamingOnLinux on: