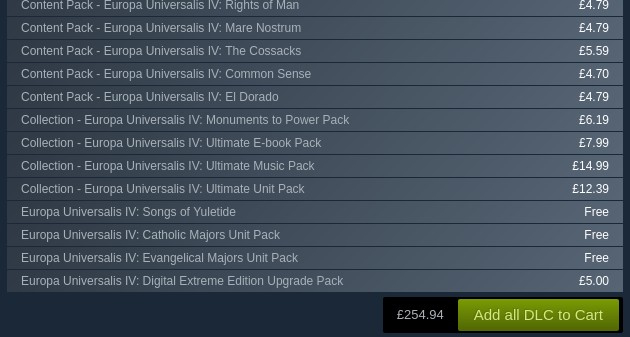 View PC info
As someone who has thought about buying the game many times but hasn't yet, I can only agree that the DLC overload is daunting. I don't want to put that much research into the purchase of a video game. I've been planning on buying the base game and ignoring all non-free DLC. But I know I will always think, "I wonder if there are a couple must-have DLC that majorly changes the whole game I'm missing out on." Thanks to the current Humble Bundle, I will probably just nab the game and bargain DLC there and let that sale package do the choosing for me.

What would be still hard for me to swallow in a subscription model is the feeling that I need to play the game a certain amount of time each month to validate the expense. Perhaps, I would play the game a lot for a couple months and then not that often, so I'd unsubscribe, never to play again, whereas maybe I'd play it a little more if there wasn't a paywall to start it up again.

One could surmise that the possible addition of a subscription model suggests continued development for the old game. It's not a must-be-true, but, you know, it likely is.
2 Likes, Who?

Eike 23 Jan, 2020
View PC info
Actually, I heard my favourite let's players (Gametube) talk about this problem today: One said when he sees such a list of DLCs, he's got no idea what he needs and what not... and goes back to playing some DOTA. :D
1 Likes, Who?

View PC info
I can never get particularly worked-up about Paradox's “DLC overload”, to be honest. The vast majority of it is cosmetic and can be easily ignored without affecting the quality of gameplay at all (other publishers would probably sell it in-game as microtransactions, which would bring down a whole different kind of ire on them). You'd really have to have more money than sense to spend £250 on the whole shebang. They usually end up with maybe half-a-dozen “real”, game-altering, DLC packages over the course of several years, and they're often on sale.

A subscription service is an interesting idea though, if it means you can try them out before buying outright. It all depends on the pricing, really.
2 Likes, Who?

Quoting: DuncA subscription service is an interesting idea though, if it means you can try them out before buying outright. It all depends on the pricing, really.

As said above, imagine you didn't follow the game grow, then you're sitting in front of a ridiculously long list of stuff and no idea what actualy are these "half-a-dozen “real”, game-altering, DLC packages" you might want. It's like you need to solve a puzzle before you are "allowed" to buy the game.
5 Likes, Who?

View PC info
Paradox continues down the road towards Evil Arts, eh? :(
0 Likes
Purple Library Guy 23 Jan, 2020
If it was a switchover where that was the only way, I'd certainly be against it. As an option, seems like a decent idea which would be the right approach for some and might get some people into it and paying them money who would otherwise have given it a miss. Maybe they should consider a "Rent to own" model where if you subscribe long enough to have paid for bloody everything, it's yours.

For me personally, that humble bundle was too good, I just picked it up with a stack of DLC.
3 Likes, Who?

Mountain Man 23 Jan, 2020
View PC info
I love Paradox games, but if they go the subscription route, I'm out.
0 Likes

Quoting: 14As someone who has thought about buying the game many times but hasn't yet, I can only agree that the DLC overload is daunting. I don't want to put that much research into the purchase of a video game.

My suggestion to newcomers to Paradox games is don't worry about DLC until you've gotten comfortable with the base game, which offers a complete experience in and of itself. Only then should you look over the DLC and see which ones appeal to you and mesh with your play style.

View PC info
I think it is a good idea so long as it is just an alternative to the "normal" way.

I am unlikely to subscribe to game services, as I play very irregularly - a long time without playing, then one day on a whim I pick it up and play for a while. Even more so for strategy games, that aren't something I will finish the story or solve all the puzzles and be done with the game - so I really want to have the stuff "to keep forever" rather than rent it.

But in many cases, paying a subscription for a few months can be a much better cost-benefit. If you can take it when advantageous, but just buy it (for a reasonable price) when it is not, it would be ok. My main fear is that a lot of things are moving into subscriptions exclusively (or at least prioritizing it), because this gives companies much more control over people and what they have... and that is horrible.
0 Likes

Quoting: DuncI can never get particularly worked-up about Paradox's “DLC overload”, to be honest. The vast majority of it is cosmetic and can be easily ignored without affecting the quality of gameplay at all
... They usually end up with maybe half-a-dozen “real”, game-altering, DLC packages over the course of several years

As Eike noted, it's not necessarily the quantity in itself that's the problem - it's the Steam Store UI that really sucks for games with lots of DLC. Even just letting the developer group things into categories like "Cosmetic", "Extra mechanics", and "Country flavour" would help enormously IMO.

I thought the recent-ish DLC section of the store would help, but nobody seems to know what to do with the tags, so you end up with eg. all the EU4 DLC lumped into "Simulation" and "Strategy" rather than anything actually useful to potential customers.
2 Likes, Who?
1/2»
While you're here, please consider supporting GamingOnLinux on: