Parkitect [Official Site, GOG, Steam] really is a lovely early access game that has you building a theme park, it recently updated too and it's better than ever.

They've worked to improve the performance of the game, particularly when you're zoomed out and you have a lot on the screen. They've managed to do pretty well, as shown by this chart included in their update post: 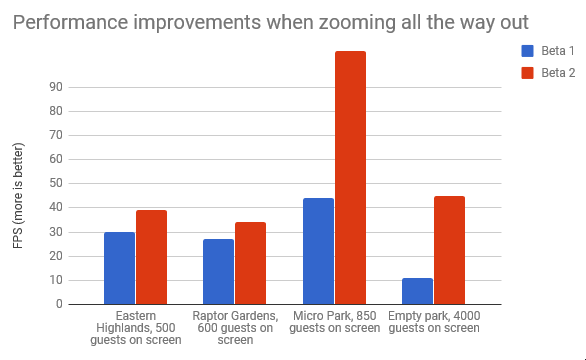 That's some good looking improvements, which they've done by reducing the quality of animations when zoomed-out. It's a pretty interesting idea, since you won't notice much of a difference. I'm sure there's plenty more they will optimise as they continue development, but that's a great start.

While the game is still mostly a sandbox experience right now, it's still quite enjoyable. If you like the idea of building your own park, it's well worth checking it out even now. The quality of the game overall is what surprises me with each update, it doesn't feel like an early access game, it's quite polished and it looks great.

See the full changelog here. You can find it on GOG and Steam right now.

Article taken from GamingOnLinux.com.
Tags: Early Access, GOG, Indie Game, Simulation, Steam, Strategy
3 Likes, Who?
We do often include affiliate links to earn us some pennies. We are currently affiliated with GOG, Humble Store and Paradox Interactive. See more here.
About the author - Liam Dawe

View PC info
i've been impressed with the quality of work going into this title. it has had steady updates about every week or two. a lot of nice features this will be a gem of a game once released.
0 Likes


Last edited by kokoko3k on 28 December 2017 at 5:25 pm UTC
0 Likes
While you're here, please consider supporting GamingOnLinux on: