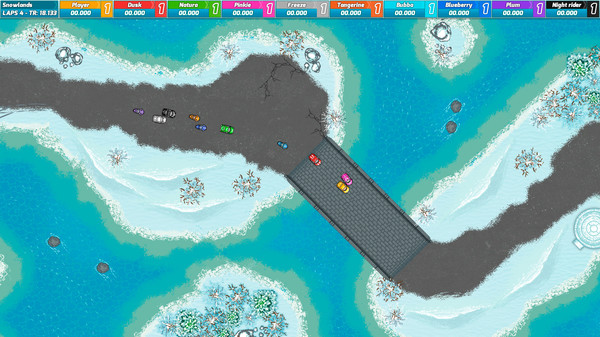 Race Online [Steam] is a fun little 2D racer that reminds me of my days gaming on Amiga. I wrote about it back in 2015, so I wouldn't be surprised if plenty of you have never heard of it.

It's been in Early Access for quite some time now, but some games are there for a good reason. This title is one of those doing EA well, considering the developer took on lots of feedback for this overhaul.

Don't be fooled by the name, it's not an online-only game. It actually has a full single-player and local multiplayer.

I've tested out various parts of the game and I was impressed by the local multiplayer. You can have four people to a keyboard or four gamepads plugged in — it works really well too! I had a Steam Controller turned on as player one and then plugged in a Logitech F310 and it actually picked it up perfectly as player two. It also saves the most recent names used in the local multiplayer, so you don't need to enter a name every time.

Everything from the collision sounds to the AI has been completely revamped and the game as a whole feels fantastic now. Previously, the AI would constantly try to drive through you, but now they all actually act like real racers, it's a completely different experience and shows the level of effort being put into it.

A good little racer for sure. Good for a blast yourself, good when you have friends over and completely family-friendly.

See the full changelog here. Article taken from GamingOnLinux.com.
Tags: Early Access, Racing, Steam | Apps: Race Online
3 Likes, Who?
We do often include affiliate links to earn us some pennies. We are currently affiliated with GOG, Humble Store and Paradox Interactive. See more here.
About the author - Liam Dawe

View PC info
looks fun but kinda pricey for what it is.
1 Likes, Who?

darkszluflooks fun but kinda pricey for what it is.

Well it has single-player, local co-op and online play with 100 maps and an editor. I personally think £8.99 is a good price for it

QuoteWe can happily say that the game is almost finished and it will be released early next month on Wednesday 5th of April.

Pompesdesky 23 March 2017 at 9:31 am UTC
View PC info
Do you know it there are improvements for cars and pick up items on the tracks ? I have fond memories of Super Sprint and Super Off Road on Atari and I would very much like to play something like this with my kids

0 Likes
fractilegames 23 March 2017 at 5:13 pm UTC
I had a chance to test the local multiplayer in a development version some time ago. The game feels really good. Smooth gameplay and good responsive controls.