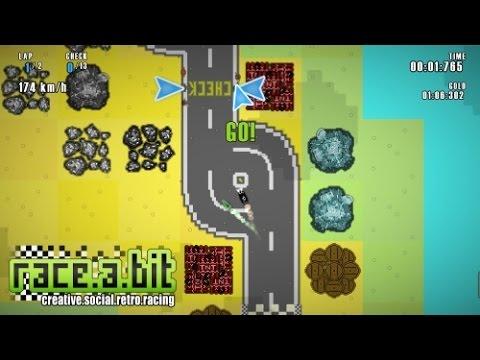 YouTube videos require cookies, you must accept their cookies to view. View cookie preferences.
Accept Cookies & Show   Direct Link
Race.a.bit is a new retro inspired 2D racer that is now on Linux, it doesn't have many reviews, so I took a look to let you know if it's worth it or not.

The game pretty much forces you to create an account and login before playing, as it tells you the offline mode has reduced features. Any game that does this annoys me, as I'm sure it does for you too. Especially for a game on Steam that could easily link accounts together (tons of games do this).

Unless you create an account and login, the only tracks you will be able to play are the official tracks. I've no idea why, but all other options like "newest" and "best rated" are still visible and you can click on them, but they infinite load unless you are logged in. Badly designed to say the least.

The game is extremely simple, and I'm going to be honest, it's not all that fun. There are no interesting mechanics other than using the arrows keys for movement, and that's literally it as far as racing goes in this game. The racing is really bland as you're racing by yourself in a very uninteresting world.

If it had other racers with you, it would be a lot more interesting, but it's so very lonely. The style of this game is crying out for other racers.

It does have a nice little track editor, which is probably one of the only redeeming qualities of this game. It also has reasonably nice retro music, but it becomes more than a bit repetitive.

Unless you're really, heavily into retro 2D racing games I don't think you will like this. I usually love them, as I played a lot on my Amiga years ago (so I have a lot of experience with these games).

Shame, but spend your money elsewhere.

Article taken from GamingOnLinux.com.
Tags: Initial Thoughts, Racing, Review, Steam
0 Likes
We do often include affiliate links to earn us some pennies. We are currently affiliated with GOG, Humble Store and Paradox Interactive. See more here.
About the author - Liam Dawe