Saints Row: The Third Also Looks Like It's Coming To Linux 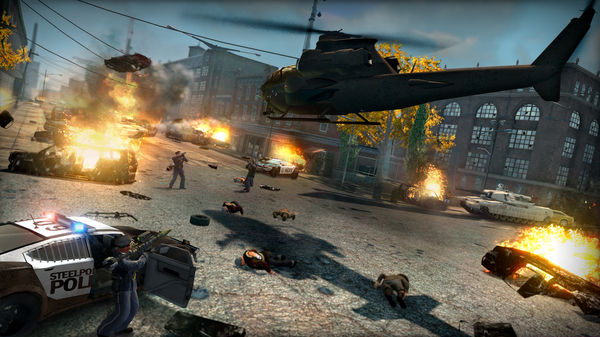 Well now, this is unexpected. It seems we may be getting quite a few of the Saints Row games, as Saints Row: The Third is showing signs of coming to Linux.

Like with the second game, this info comes from SteamDB:

Obviously it's still unconfirmed, but with this now on the second and third Saints Row, it looks like it's no accident.

As usual, we urge you not to buy it until release. This way you can be sure you count as a Linux sale, and just in case the port doesn't actually surface.

About the game (Official)
Years after taking Stilwater for their own, the Third Street Saints have evolved from street gang to household brand name, with Saints sneakers, Saints energy drinks and Johnny Gat bobble head dolls all available at a store near you.

The Saints are kings of Stilwater, but their celebrity status has not gone unnoticed. The Syndicate, a legendary criminal fraternity with pawns in play all over the globe, has turned its eye on the Saints and demands tribute. Refusing to kneel to the Syndicate, you take the fight to Steelport, a once-proud metropolis reduced to a struggling city of sin under Syndicate control.

Take a tank skydiving, call in a satellite-targeted airstrike on a Mexican wrestling gang, and defend yourself against a highly-trained military force using only a sex toy in the most out- landish gameplay scenarios ever seen, igniting a city-wide war that will set Steelport on fire. Strap it on.

View PC info
Well, they all use the same engine, maybe even the exact same, so it may not be that surprising after all.

I just hope it's a native port, hopefully even with the bugs ironed out. But... I don't hold my breath.
0 Likes

I own them with all DLC's so I can't wait to play COOP with Faildows cousin :)
2 Likes, Who?

Sabun 8 Sep, 2015
View PC info
Liam, you gotta stop man! You're making me too giddy with excitement with all these announcements :D
0 Likes

View PC info
Man... really, the Steam Machines are coming with with so many indies and AAA games available on launch day that if SteamOS fails, it will be because the lack of advertisement.

I can't see any good reason other home consoles are better than SteamOS. Only if someone loves a particular exclusive.
3 Likes, Who?

Quoting: BeamboomWell, they all use the same engine, maybe even the exact same, so it may not be that surprising after all.

I just hope it's a native port, hopefully even with the bugs ironed out. But... I don't hold my breath.

What do you mean native? After the "wrapping" VP has done with Dirt and Arma 3, it could end up having better performance if VP did these ones too. Sure, if it was native, there is a chance they could get the OpenGL performance up to be better than Windows, or on par with it, but it does take more work to do that AFAIK.

Deep Silver Port's are in House port's. I never seen a external Port from Deep Silver.

View PC info
The news of Saints Row 2 had me skeptically excited but now it's sounding more believable.
0 Likes

That's what I would love to see. There already was a Sacred 1 port by Linux games publishing, would be awesome if they could port the rest of them, and I have all the Risen as well, just haven't played them yet (no time to reboot into windows these days).

slaapliedje
1 Likes, Who?
1/3»
While you're here, please consider supporting GamingOnLinux on: